What Is Hanukkah? Everything to Know About the Festival of Lights

This year, Hanukkah begins at sun down on Nov. 28 and ends at sunset on Dec. 6

Hanukkah is a Jewish holiday that takes place usually in November or December and lasts for eight nights. But many people might not know the rich history and traditions that go along with the annual observance known as the "Festival of Lights."

Here is what you need to know about Hanukkah:

Hanukkah begins on the 25th of the month of Kislev, which corresponds to November-December in the Hebrew calendar. This date is different each year in the Gregorian calendar that is widely used across the world.

This year, Hanukkah begins at sundown on Nov. 28 and ends at sunset on Dec. 6. 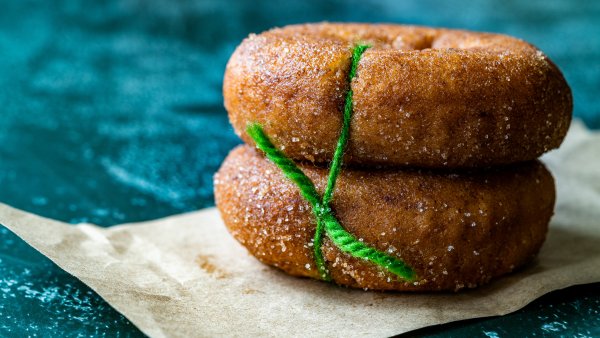 What is the story of Hanukkah and why does it last for eight days?

Hanukkah, or Chanukah, celebrates the the Maccabean Revolt against the Syrian-Greek army. In the second century B.C., the Holy Land was ruled by the Syrian King Antiochus IV Epiphanes who told the Jewish people they must renounce their religion and accept Greek beliefs or be sentenced to death, according to chabad.org. A small group of poorly armed Jewish rebels, led by Judah Maccabee, fought back and successfully drove the Syrian-Greeks from the land, reclaiming the Holy Temple in Jerusalem.

When the victorious rebels sought to light the Temple’s menorah, the seven-branched candelabrum, there was only enough oil to keep the candles burning for a single day. However, in what is considered a miracle in Jewish faith, the flames continued to flicker for eight nights.

While the menorah used in the ancient holy temple only had seven branches, the Hanukkah menorah has nine candlestick holders — one for each night of Hanukkah and the "shamash" (attendant) to light the others.

How is Hanukkah observed?

The main Hanukkah tradition is the lighting of the commemorative menorah. On the first night, two candles are lit: the shamash and the first branch. Over the next seven days, an additional candle is lit until all eight lights are aflame.

Candles are added to the menorah from right to left, but lit each night from starting with the left-most candle.

Traditional blessings and songs are recited during the lighting of each candle, which occurs after sunset (except on Fridays when it is lit before the Shabbat candles). Generally, the menorah is placed in a window or doorway for those outside the home to see it.

During Hanukkah, Jewish people around the world light a menorah to honor a miracle that occurred during the Maccabean Revolt to preserve Judaism. What is this miracle and why is it commemorated? Rachel Fastow welcomed us into her home to explain the Jewish tradition.

What are other Hanukkah traditions?

Hanukkah is perceived as a marquee Jewish holiday in the U.S. due to its proximity to Christmas. But in fact, Hanukkah is not as important as the High Holidays of Rosh Hashanah, Yom Kippur and Passover.

Over the years, one tradition that has been adopted by Jews in the U.S. is the custom of gift-giving. Jewish parents often give out presents to their children on Hanukkah, usually one gift on each of the eight nights.

“It’s important to recognize that it is an American Jewish phenomenon, this gift-giving that’s part of Hanukkah,” Rabbi Menachem Creditor, scholar in residence at the UJA-Federation of New York, told Time magazine. “It’s not historically part of Hanukkah at all.”

Playing the dreidel is also customary during this time. A dreidel is a four-sided spinning top with Hebrew letters written on it. Winning or losing the game depends on the letter which the dreidel lands on when it is spun. Gelt is a reward used by children when playing dreidel. Gelt is traditionally either real money or chocolate coins.

What kind of food is served on Hanukkah?

Since the holiday is centered around the miracle of the oil, a traditional Hanukkah menu is composed of foods fried in oil. Families typically eat latkes (potato pancakes) garnished with applesauce or sour cream and sufganiyah (round jelly doughnuts). There is also plenty of dairy-based dishes, challah bread and brisket.