McDonald's BTS Meal Launches Wednesday With a Side of New Merchandise

The BTS meal includes a 10-piece chicken McNuggets, medium fries, a medium Coke and — for the first time in the U.S. — Sweet Chili and Cajun dipping sauces

The much anticipated McDonald's BTS meal is here.

The Chicago-based fast-food company announced in April that the Korean pop sensation was behind its latest celebrity collaboration meal.

The BTS meal includes a 10-piece chicken McNuggets, medium fries, a medium Coke and — for the first time in the U.S. — Sweet Chili and Cajun dipping sauces. McDonald's said the sauces are inspired by popular recipes from its restaurants in South Korea, where the "Dynamite" crooners are from. The price of the meal is $6.13.

McDonald's is also dropping a limited-edition line of merchandise on Wednesday. The collection includes hoodies, t-shirts, bathrobes, socks and sandals, and is inspired by the groups signature purple color and the golden arch. The collection goes on sale at 7 p.m. ET Wednesday on Weverse, a fan-community app created by BTS' record label.

The boy band's meal launches in the U.S. and 11 other countries on May 26. It will continue to roll out in nearly 50 countries through June.

"BTS truly lights up the world stage, uniting people across the globe through their music," said McDonald's Chief Marketing Officer Morgan Flatley, in a news release. "We're excited to bring customers even closer to their beloved band in a way only McDonald's can – through our delicious food – when we introduce the BTS signature order on our menu next month." 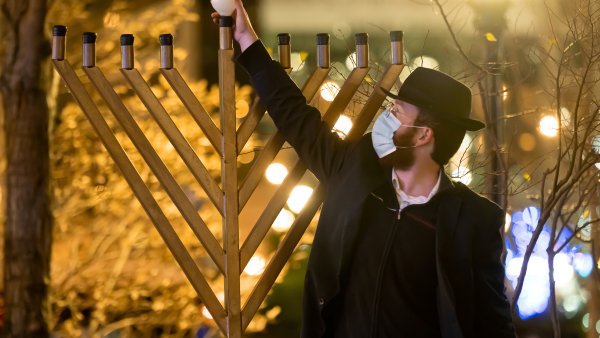 What Is Hanukkah? Everything to Know About the Festival of Lights

The spike in demand during the Travis Scott promotion caused the company to temporarily run short of ingredients to assemble its signature Quarter Pounder burgers at some restaurants.

BTS and Jimmy Fallon challenge each other to a series of mini tournament-style games while they ride the New York City subway.