Protests across the country are putting a spotlight on the military-style equipment some local law enforcement agencies carry.

From Boston to Worcester to Brockton, people demonstrating against racism and police brutality in the wake of George Floyd's death were met by officers in tactical gear.

So where does it come from?

In some cases, the military itself is the source.

Law enforcement agencies in 49 states participate in a federal program that provides them surplus equipment from the Department of Defense.

Among them are more than 100 agencies in Massachusetts, which have collectively received more than 3,000 pieces of excess military gear, ranging from diesel generators and ambulances to firearms.

But critics say arming police with military gear heightens the threat of violence and makes neighborhoods feel like war zones.

"It shows how we're viewed as not being human," she told NBC10 Boston. "It says they think this is like Iraq to them."

"How do we remain mindful of that and then present ourselves in a way that shows solidarity instead of us versus them?" she asked.

Police in Massachusetts have acquired millions of dollars' worth of surplus equipment through the federal government's 1033 Program, including protective clothing, vehicles and numerous firearms, which are among the most requested items in the state, according to the most recent figures released by the Defense Logistics Agency, the entity that handles requests.

More on the protests for police reform 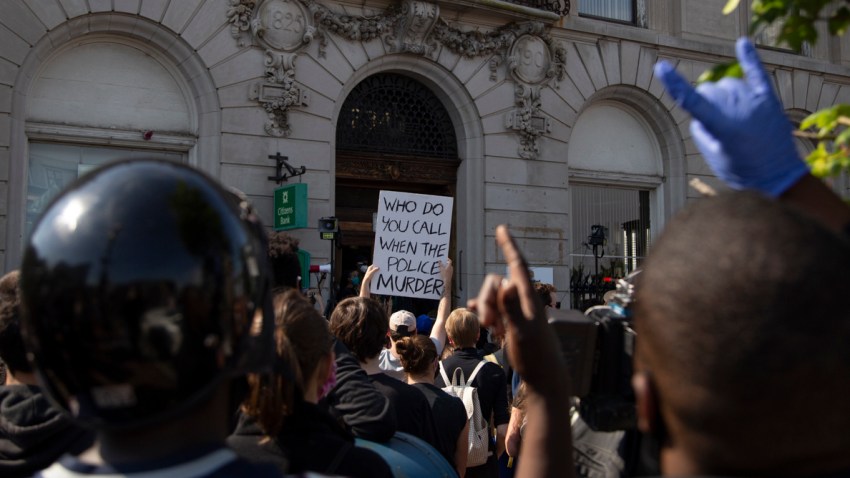 ‘We All Need to Stand Up': Boston Protesters in Portrait 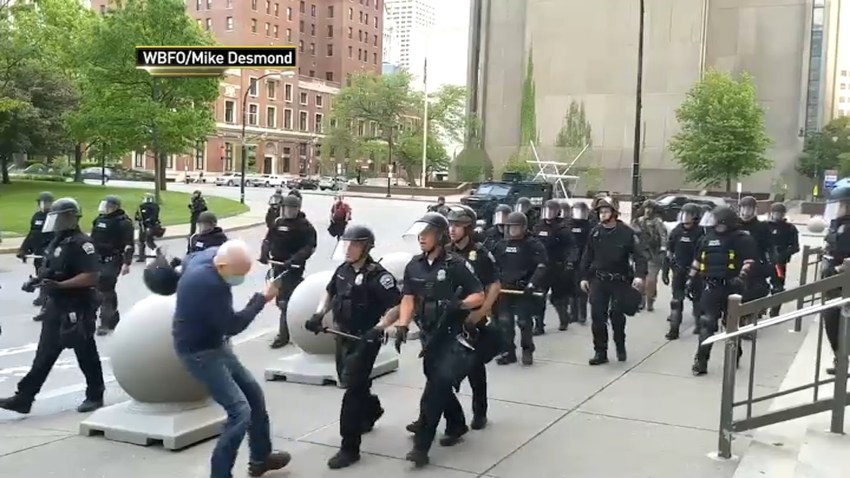 'His Brain Is Injured:' Lawyer Updates on 75-Year-Old NY Protester Shoved by Police

Boston police aren't on the list of recipients – a spokesman said they don't participate – but many smaller communities are.

Some got big-ticket items, such as mine-resistant vehicles valued at more than $700,000.

One such armored vehicle was delivered last year to the police department in Oak Bluffs, which requested it for use by the Martha's Vineyard Tactical Response Team, the group trained to respond to dangerous environments, such as hostage standoffs and shootings.

Police say it could also help during weather emergencies that cause flooding, such as blizzards, hurricanes and nor'easters, since parts of the island can become difficult to reach in a police cruiser.

Jonathan P. Klarén, chief of police in Chilmark, said the communities spent only a few thousand dollars to ship the armored vehicle to Massachusetts.

"Quite frankly, we thought it was a good opportunity for us here and money well spent," Klarén said.

Because they're removed from the mainland, police on the Vineyard also have less access to regional law enforcement resources, making it more important for them to be self-sufficient, Klarén said.

"We look at it as not trying to militarize the police department," he said. "We are trying to protect the police officers and citizens of the island."

In New Bedford, police offered a similar rationale. Melissa Batchilder, director of communications for the New Bedford Police Department, said officials there wanted an armored vehicle "to prepare for the worst and hope for the best."

"This type of vehicle provides ballistic protection to aid officers in responding to save lives," Batchilder wrote in an email this week. "We keep it with the idea that we will never have to use it."

Sensitive to public perception, police in Haverhill quickly repainted their surplus military truck when they received it in 2014, and took the gun turret off the top, Haverhill Police Chief Alan R. DeNaro said.

DeNaro said it's never been used in any tactical response. Instead, you might see it parked around the city, performing what the chief called "overt" video surveillance in areas where there has been drug or gang activity.

The 1033 Program has proven controversial in recent years, leading the Obama administration to largely curtail it in 2015, in the wake of widespread demonstrations in Ferguson, Missouri, that provided stark images of police clashing with the public.

The program, which saw demand from law enforcement agencies peak between 2010 and 2014, was scaled back, but later reconstituted by the Trump administration.

It now faces renewed scrutiny as calls for police reform resound across the country.

Congressman Seth Moulton, an Iraq War veteran who served in the Marines, said it's problematic for police to carry more gear than he had on the battlefield.

Moulton, a Democrat who represents the North Shore, said he supports amending the program, but believes a larger national discussion is needed about reforming law enforcement.

"More fundamentally, let's change the culture of policing," Moulton said. "Let's change the relationships police departments have with their community. That's the root of the problem."