An NBC10 Investigation exposed a contractor’s trail of destruction in Massachusetts and uncovered a lengthy history of criminal charges, lawsuits and consumer complaints. New homeowners continue to come forward, but the state agency that oversees home improvement contractors says it’s limited in how quickly it can take disciplinary action.

The Massachusetts agency that oversees home improvement contractors said that it can’t take action based on the extensive findings of an NBC10 investigation that detailed homeowners’ horror stories of giant holes left in their backyards and broken promises.

Meantime, more homeowners continue reaching out to us, claiming they were also victimized by Docchio.

“My backyard looked like a war zone all summer,” said Stephen Vazza, who owns a home in Barnstable.

Vazza said he hired Docchio in July to make some upgrades to his existing pool and patio, a project that was only supposed to take a few weeks.

However, five months later, Vazza showed us how the job still isn’t complete. At one end of the pool, there’s a hole filled with debris where an automatic pool cover should’ve been installed.

Vazza said he wrote a $15,000 check for the expensive item, but kept getting excuses about why it hadn’t been delivered, according to text messages he shared with us.

The pool stayed empty for the summer. Vazza said he lost precious time with his family, along with weeks of rental income while they were away.

“This brings tremendous stress on a marriage,” Vazza said. “This was an elective surgery that turned out to be a nightmare.”

More From 'To Catch a Contractor' 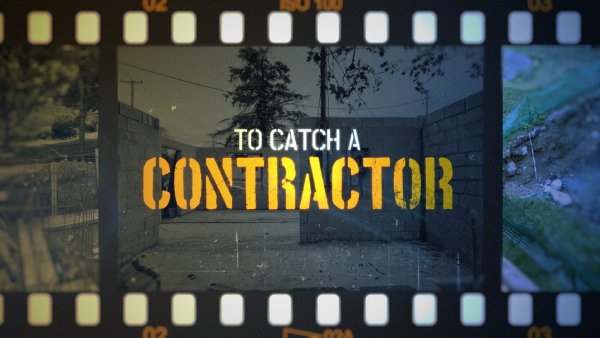 ‘We Have to Be a Better Watchdog': Lawmakers React to Contractor's Trail of Destruction

Vazza contacted us after spotting our investigation online and reading about all the other homeowners who shared their horror stories about Docchio.

We caught up to the contractor in October before a felony court appearance in Rhode Island. In that case, he’s accused of failing to pay back a consumer $25,000 after abandoning a project in Portsmouth.

When asked about all the money he owes consumers, Docchio simply replied, “False.”

Later in court, he pleaded not guilty to the charges and posted the $30,000 bail.

A few days later, Southborough building commissioner Laurie Livoli said Docchio was in her office, complaining about a permit requirement for a project.

“He was just trying to be a little pushy,” Livoli recalled. “But I’ve been around long enough not to take it. It’s pretty black and white on what we need.”

Later that week, Livoli was home watching TV and saw Docchio featured in our investigative series. Shocked, Livoli said she had a colleague reach out to the Southborough homeowner who’d hired Docchio for a spa and patio project.

That homeowner told me the phone call allowed her to cancel a $20,000 payment just in time.

Even though the permit had not been approved, Docchio had already dug holes and brought in supplies for the patio and pool project.

“He will never get a permit here,” Livoli said. “He probably should be barred from working in Massachusetts. I wish his registration would be revoked. Hopefully after this, it will.”

A popular online platform for consumers searching for home improvement contractors has removed the page of a business exposed in an NBC10 Boston investigation.

As we previously reported, Docchio is not approved to work as a contractor in Rhode Island or Connecticut.

However, in Massachusetts, he continues to hold an active home-improvement contractor (HIC) registration.

The Office of Consumer Affairs and Business Regulation (OCABR) has investigated him twice—in 2017 and 2020. Those cases resulted in more than $5,000 in fines and a 5-month suspension.

Despite all the new horror stories we have reported, the state agency told us it is not able to initiate its own probe unless a homeowner files an HIC complaint.

“OCABR does not have investigation or prosecution abilities in the Commonwealth and may take action against a contractor that violates the HIC Act based on a consumer initiating a complaint,” an agency spokesman said in a written statement. “If a new complaint is filed by a homeowner, OCABR will act swiftly to hold a hearing and, if the allegations are proven true, take appropriate action against the registration within the Commonwealth.”

At least eight homeowners we’ve interviewed have already shared their contact info and said they would be glad to file a complaint with the state agency.

Vazza said it wasn’t until he went to the Barnstable police in November that Docchio provided proof his automatic pool cover had finally been ordered, months after he wrote the $15,000 check.

Elsewhere on the Cape, another homeowner contacted the Sandwich Police Department last month about the pool cover he had not received. He told us Docchio sent a $15,000 refund a few days later.

As we previously reported, the issue is on the radar of state lawmakers who chair the legislature’s consumer protection committee. They have requested a meeting with OCABR to discuss potential changes that can be made to help avoid future nightmare scenarios.

Meantime, Massachusetts Attorney General Maura Healey is investigating the situation. A spokesperson said her office has received a total of 18 consumer complaints, including 10 this year.

“When so many people are stepping up and telling their stories, I would think it would be lights out,” said Vazza. “I’m not really able to process how a guy like him can be banned in two neighboring states, but still be able to go around Massachusetts and scam people out of their hard-earned money.”