The weight of the heavier cars and "subpar track infrastructure" in the Wellington Rail Yard were factors in some of the accidents, the MBTA said

New subway trains being rolled out on the MBTA's Orange Line have derailed six times near Wellington Station in Medford, Massachusetts, and officials say their weight might have played a role in some of the accidents.

The new vehicles, which entered service in August 2019, were designed for optimal performance on the T’s so-called "mainline" tracks, which carry subway trains that are in service, according to T spokesperson Joe Pesaturo.

Those design changes make the new trains more durable. But they're also heavier than the 41-year-old cars they will replace, and less suited to operating on the "aging track infrastructure" at the Wellington Rail Yard, where trains are maintained while out of service, Pesaturo wrote.

The NBC10 Boston Investigators posed a series of questions to the MBTA about derailments after a train carrying 100 passengers came off the tracks near Wellington last week.

In response, the agency said new Orange Line trains have derailed five times previously while traveling through the Wellington Rail Yard. The trains were out of service at the time, and no passengers were on board. 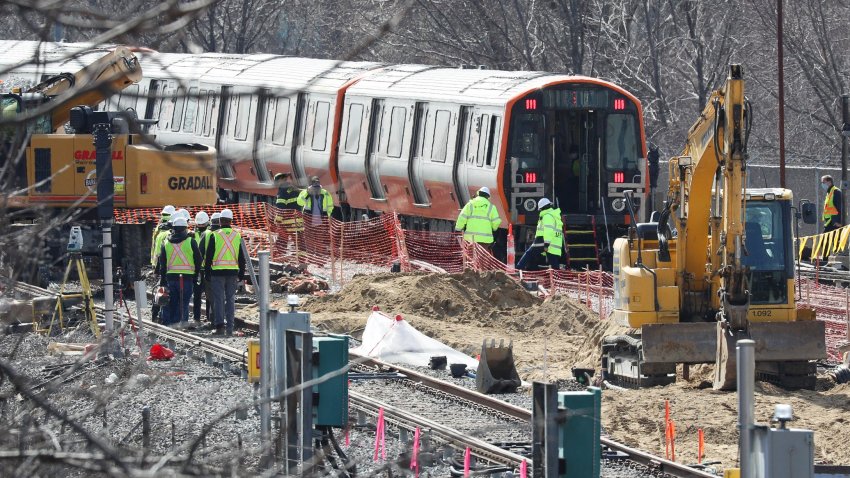 After investigating, the T determined "subpar track infrastructure" was to blame for two of the derailments in November 2019 and July 2020. It was also a contributing factor in two separate derailments last month that are still under investigation, Pesaturo said.

A fifth derailment in December 2020 was found to be the result of "poor conditions in the yard due to a major winter storm," Pesaturo said.

The T previously awarded a $103 million contract to rebuild Wellington Yard and its track and signal infrastructure in 2018. Work is now more than halfway complete on the project, which is slated to finish next summer.

"The trucks and wheels on the 41-year old cars have been interfacing with the worn, aging track infrastructure in the rail yard for decades," Pesaturo explained. "The rail yard is being modernized to be more compatible with the new, state-of-the-art heavy rail fleet."

Keith Millhouse, a national rail safety expert who previously led the Metrolink system in Southern California, said it's not uncommon for new machinery to put a strain on infrastructure that hasn’t been upgraded in years.

"You know, you take new cars, new specifications, new materials and you put them onto an existing older set of tracks, you can have certain discrepancies between the two that can create issues and problems," he said.

In the latest incident, the MBTA said an Orange Line train derailed about 11:40 a.m. on March 16 in a work zone at Wellington Station, when a slow-moving northbound train was crossing to the southbound track to accommodate ongoing maintenance work.

The exact cause remains under investigation. In the meantime, the MBTA has pulled all of the new Orange and Red Line trains from service and replaced them with shuttle buses.

To date, the MBTA has received 32 of 152 new Orange Line cars and six of 252 planned new Red Line cars, which are being manufactured under a multimillion-dollar contract with Chinese company CRRC.

But the rollout has been bumpy, with the cars initially making odd noises that were eventually traced to a faulty wear pad, then temporarily taken out of service last March for a maintenance issue.

Delivery of all cars is now more than a year behind schedule because of COVID-19-related shutdowns at manufacturing plants in China and Springfield.

Federal records reviewed by NBC10 Boston show the MBTA experienced more derailments in recent years than nearly all of its peers.

Trains came off the tracks 57 times, and 27 of those incidents involved passenger trains. Only the transit system in New Orleans saw more derailments during that time, with a total of 77.

A string of high-profile derailments in 2019 prompted creation of an independent panel to examine safety at the MBTA. In December of that year, the group concluded that the T had a "questionable" approach to safety including frequent lapses in maintenance and inspections.

“Any derailment is a big deal and you can’t overlook it,” said Millhouse, the rail safety expert. “Even if it’s a low-speed derailment, that indicates something is not working properly, and if something is not working properly, it has the potential to cause injury or death in the worst-case scenario. So you want to address that problem and get it fixed as soon as possible.”