A Weymouth tow truck operator accused by Massachusetts authorities of engaging in predatory towing practices found himself in more legal trouble Thursday – this time in a criminal courtroom.

Joseph Lewis, owner of All Over Towing, was arraigned in Plymouth District Court on charges stemming from an alleged drunk driving crash last month in Duxbury.

Early on the morning of Dec. 25, a flatbed tow truck plowed through the guard rail on the northbound side of Route 3 in Duxbury, coming to rest near the edge of the woods. 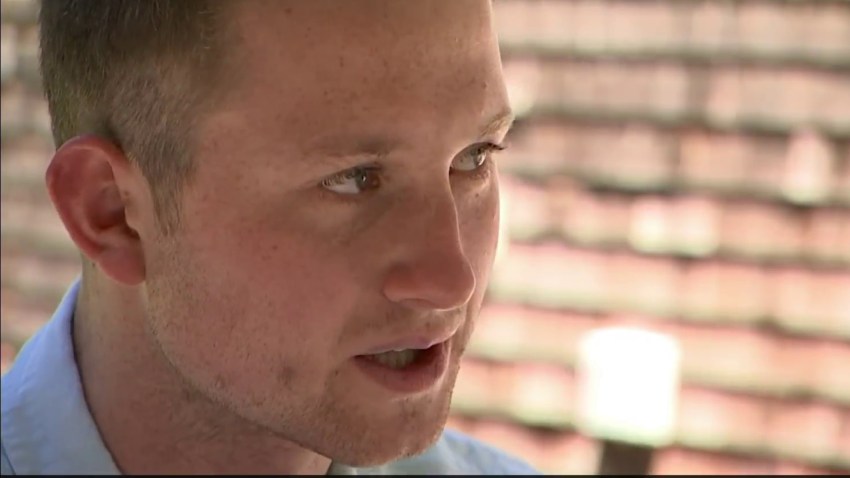 The driver fled the scene on foot, and there were no registration plates on the vehicle, but officers found a cellphone belonging to Lewis inside, according to a criminal complaint filed in court. A state trooper later encountered Lewis "stumbling along the side of the roadway" with blood running down his forehead and covering his entire face, the report states.

Lewis denied he was behind the wheel of the wrecked truck, telling a trooper he was repossessing a car in nearby Marshfield when a group of men attacked him with a baseball bat and took his vehicle while he was unconscious, according to the report.

"Once he regained consciousness, he said that he began looking for a pay phone to call the police and report the incident," the report reads.

The report says that while Lewis spoke, a trooper allegedly smelled a strong odor of alcohol coming from the 34-year-old. He was transported to the hospital for treatment and summoned to appear in court on charges of driving under the influence of alcohol, negligent driving and leaving the scene of a crash with property damage. He pleaded not guilty to the charges Thursday.

According to their report, officers also questioned Lewis about why he didn't knock on any doors or flag down any vehicles for help while walking from Marshfield to the location in Duxbury where officers encountered him – a distance one trooper estimated at roughly six miles.

The judge presiding over his arraignment offered a similar question, noting the Marshfield Police Department, which has a prominent sign on its front lawn, should have been visible to Lewis during his sojourn.

Lewis allegedly told officers on the morning of the crash that he "didn't see anyone and didn't want to wake anyone from their home," according to the police report.

Lewis declined to answer questions about the incident from NBC10 Boston while leaving court. His lawyer, Jordan Rodrigues, said Lewis will fight to have the case dismissed.

"They don't have him behind the wheel," Rodrigues said. "There's no impairment. There's no lack of sobriety, for use of a better term. It doesn't make out the elements for an OUI case. Simple as that."

The OUI charge comes as Lewis is mired in a towing controversy. After receiving consumer complaints, the Transportation Oversight Division of the Massachusetts Department of Public Utilities revoked his license to tow from private lots in June 2019, saying in written testimony that Lewis "habitually violated" regulations that are designed to protect consumers from unfair and deceptive business practices.

The NBC10 Boston Investigators heard similar complaints last year from half a dozen drivers, who complained Lewis was aggressive and predatory when he towed their vehicles from private lots.

Some told NBC10 Boston they were parked legally when Lewis hitched their vehicles to his truck and drove away. Others said he charged inappropriate fees.

Despite their order to stop, Lewis kept towing — continuing to remove vehicles in plain view of the NBC10 Boston cameras.

According to Quincy police, one of those cars that Lewis towed was an undercover police vehicle. That landed him in Quincy District Court, where Lewis pleaded not guilty last year to larceny and extortion charges.

With the criminal charges pending, Lewis and his lawyer continued to negotiate with the state last year to get his company's towing license back, filing an appeal that allowed All Over Towing to continue operating while the administrative case was pending.

Despite outlining a litany of concerns, DPU accepted a settlement agreement with All Over Towing on Jan. 24 that allows the company to continue doing business without admitting any wrongdoing.

NBC10 Boston tried several times to get someone from DPU to explain its decision. When we went to its offices, DPU's chief of staff told us the consent agreement with All Over Towing speaks for itself.

Under the terms of his settlement with DPU, Lewis must still reapply for a towing license after serving his 120-day suspension. If approved, he would be required to submit monthly towing records to the state for at least one year, and to include information on how consumers can lodge a complaint on his invoices.

A DPU spokeswoman did not respond Thursday to a request for comment on whether the new criminal case against Lewis will factor into its decision about whether to reinstate his towing license.

Following his arraignment, Lewis was released on $250 bail. He is due to appear in Plymouth District Court again in April.