Amazon just wrapped up its fall product event, where it unveiled a bunch of new gadgets, including a home robot named Astro, ahead of the busy holiday shopping season.

Here's our full coverage of the event:

I tried Amazon's Astro home robot — here's what it's like

Amazon announced its Astro home robot during its fall product event on Tuesday. I had a chance to check it out with Amazon's product team last week. Here's my story talking about what it's like, what it can and can't do, and why Amazon decided to build a home robot. 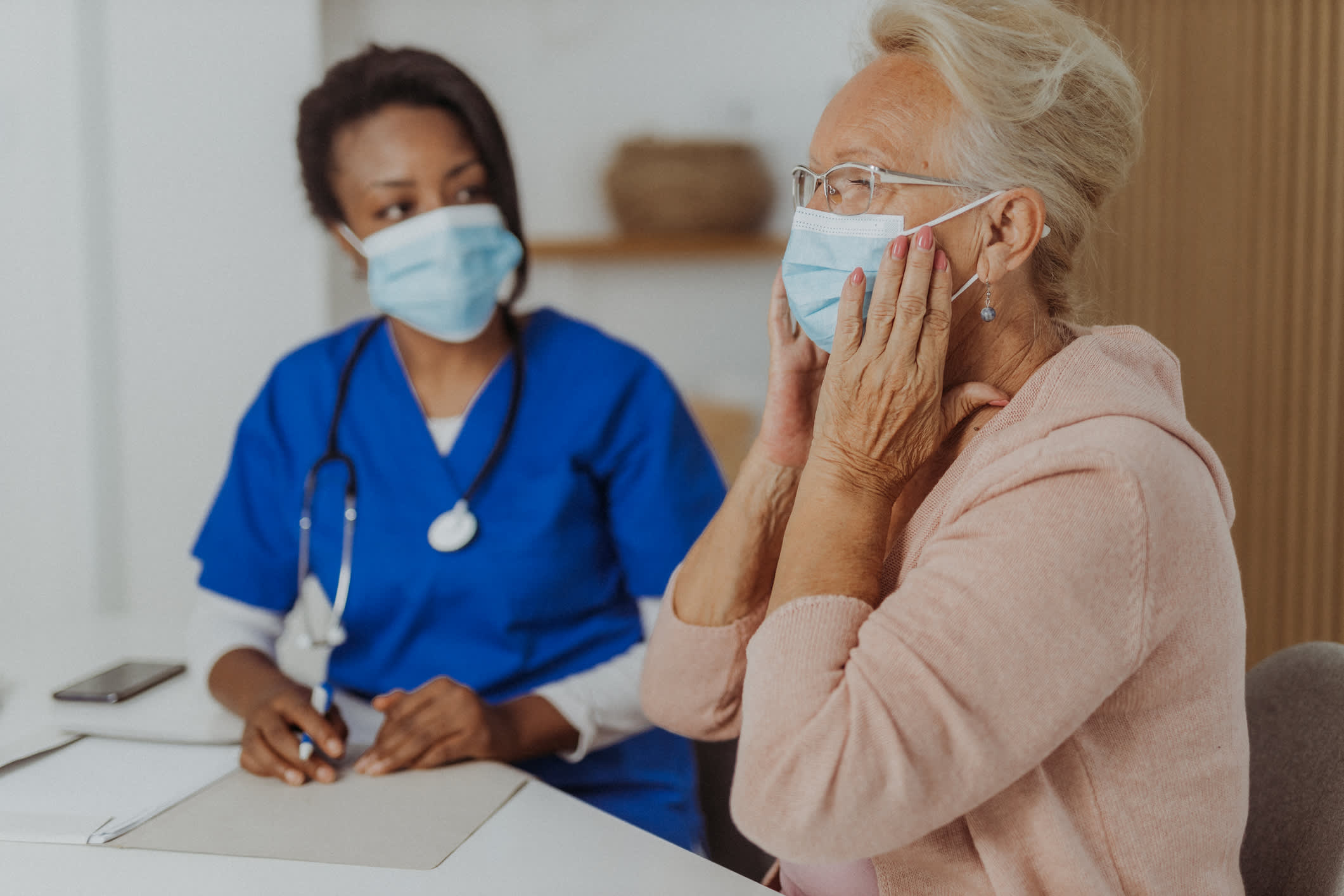 Astro is equipped with a rotating screen that's mounted onto a base with wheels. Amazon designed the robot to appear animated and friendly, with eyes and expressive body movements that respond to user interaction.

The robot can move on its own from room to room and is capable of navigating around objects on the floor or braking to avoid colliding with obstacles such as a pet that moves into its path. A periscope camera attached to the base of the device can be raised or lowered to view objects that are high up.

"I've had this robot in my home for about a year, and it does wonderful things," Limp said.

Astro is equipped with Amazon's Alexa voice assistant. It can set and deliver reminders, serve up entertainment such as TV shows or podcasts and control smart home devices, among other tasks. The robot also responds to commands; so if users say, "Astro, beatbox," the robot will make musical noises.

The robot also has security and safety features. Through an integration with Amazon's smart home security subsidiary Ring, Astro is capable of autonomously patrolling a user's home while they're away. It can flag potential intruders and listen for things such as broken glass or smoke alarms via a feature called Alexa Guard.

For those worried about privacy, Amazon said Astro's camera, microphone and motion sensors can be switched off by pressing a button. Users can also designate "out of bounds zones," or certain rooms that are off limits to the robot.

Starting today, Astro costs $999.99 and is available via invitation only. Amazon didn't reveal a release date for the robot, but it said it will begin granting invitations later this year.

Amazon announces Alexa Together elder care service for $20 per month

Amazon announced a new multi-user subscription aimed at helping users care for elderly relatives. It includes an emergency hotline, fall detection and activity detection, all integrated and delivered through an Amazon Echo device.

Users will be able to receive, for example, a push notification when an elderly parent wakes up. Older users will have around-the-clock access to a professional emergency helpline, Amazon said.

Alexa Together costs $19.99 per month, and many users will be able to get a six-month trial.

Amazon's Ring security drone is now available to purchase by invitation only. Interested customers can sign up to be invited to buy it. That's a format Amazon typically uses for products it's not ready to launch more broadly.

Called the "Always Home Cam," it costs $249.99 and is an autonomous indoor camera that flies around the home, giving users a view of their house when they're away. Amazon's Ring first announced it during its fall 2020 event.

In addition to the drone, Amazon announced Ring Alarm Pro, a "base station" for Ring security devices that has an Eero router built in. It costs $249.99 and is available for preorder starting today.

Amazon on Tuesday announced a new health tracker that competes with Google's FitBit and Apple Watch. It's called Halo View, and it will retail for $79.99.

Previous Amazon fitness trackers didn't have a display, but this model comes with a color screen. The bands can be changed out and customized.

The device comes with a free one-year Amazon Halo subscription, which now includes fitness classes delivered through video. Amazon says it will have hundreds of workouts.

The Halo subscription will also include a nutrition trainer that combines grocery lists and healthy meal planning suggestions, which will become available to the public next year. It allows users to build a tailored meal plan. Amazon says it includes over 500 recipes from partners, including Amazon's Whole Foods Market.

Amazon said the Halo View wearable will ship before the holidays this year.

Amazon announced a new product aimed at kids that combines video calling with games coming from a projector. The projected graphics respond to touch.

The aim is to make video calls more engaging for children, Amazon said. Games such as "Tangram Bits" allow the kids to solve puzzles on the projected surface while the parent videoconferences from a standard tablet.

The device has a "privacy shutter" that turns the camera off.

Disney, Mattel, Nickelodeon and Sesame Street characters are signed up to make games for the device. Amazon said it would open it up to some outside developers next year.

It costs $249 but won't be released widely at first, and ordering one will require an invitation. People can sign up to test it starting today, and Amazon will start shipping devices in "the coming weeks."

Amazon announced "Hey Disney," which it calls a voice assistant that "works alongside" Alexa.

Multiple Disney characters, including Mickey, Dory and Olaf will respond from the smart speaker, Amazon said. The content includes jokes and trivia. Disney was able to customize Alexa technology to fit its own content and brand, according to the companies.

There's also a new stand for the Echo Show that looks like Mickey Mouse. It's made by Otterbox and will cost $24.99.

"Hey Disney" will be available in the U.S. from the Amazon Alexa skills store in 2022, Amazon said.

Amazon's SVP of devices and services, David Limp, started his presentation talking about ambient computing and how it plays into the company's vision for the future of the smart home.

So, what was he talking about?

Ambient computing is the concept where "smart" devices are intelligently working for you automatically. (Legendary tech columnist Walt Mossberg dedicated his final column to ambient computing, if you want to take a deep dive.)

To make this work, you need as many appliances as possible connected and working together, which Amazon does through its Alexa assistant. The company has also been making more and more connected devices — from microwaves to video doorbells. And more are coming Tuesday.

It's a bold concept that could one day make your home just as smart as one out of a classic episode of "The Jetsons."

Amazon announces new Echo that can hang on a wall

Amazon unveiled a new Echo device that can be mounted on a wall or placed anywhere around the home. It's called the Echo Show 15.

Amazon has released other voice-activated smart displays through its Echo Show line, but this one has the largest screen yet at 15.6 inches. Users can hang it on a wall either vertically or horizontally, similar to a photo frame.

"We think of it as a kitchen TV, but much, much smarter," said Miriam Daniel, vice president of Alexa and Echo devices.

The Echo Show 15 can control smart-home devices such as Ring security cameras, lights or appliances. It can also be placed in the kitchen to show how-to videos or recipes.

Amazon designed widgets that can be added to the Echo Show 15's display for things like digital sticky notes, to-do lists and other tools. Using a new feature called visual ID, Amazon says, Alexa can recognize different users and serve up personalized information such as calendar events. The feature is optional, and users have to enroll in the feature to use it.

Amazon announced a competitor to Google's Nest on Tuesday. Its new Smart Thermostat will cost $59.99, which is half the price of the average smart thermostat sold on Amazon, the company said.

It's part of a partnership with Resideo, the makers of Honeywell Home thermostats, and some customers should be able to get energy rebates, bringing down the price even further, Amazon SVP David Limp said.

Users can say, "Alexa, good night," and the thermostat will turn down the temperature, according to an example presented by Amazon.

Dave Limp, Amazon's SVP of devices and services, just walked on stage at the Amazon Spheres, its nature-inspired centerpiece at its Seattle headquarters, to kick off the event.

"Throughout today, you're going to see examples of our next big leaps forward," Limp said.

Amazon accidentally leaked its own products

Amazon's hardware event isn't supposed to kick off for another 10 minutes, but for a few brief minutes, it accidentally leaked images of a bunch of products it will probably announce.

The company is hosting a livestream that's only open to the press. At the bottom of the stream, it posted photos of a smart thermostat, a new wearable device and other products.

The images have since been removed from the stream page. Amazon will likely provide more details about the products when the event begins shortly.

Amazon typically launches a smattering of products at its annual hardware event, from Echo devices to more far-flung devices such as Alexa-powered microwaves and wall clocks. Some of the products may not be available widely to the public yet, as Amazon launches them by invitation only to test out new ideas.

Last year, for example, Amazon surprised viewers when its subsidiary Ring launched a flying security drone. That drone still hasn't launched widely to the public, however.

Amazon gadgets are usually hot sellers ahead of the holidays

Amazon's gadgets are regularly among the top sellers during the company's Black Friday and Cyber Monday sales. That's when Amazon typically discounts devices such as its Echo products and promotes them on its site while folks are shopping for loved ones.

Last year, Amazon said some of its top Cyber Monday sales included the Echo Dot and the Echo Show 5 smart screen, for example. So it makes sense for Amazon to have new products ready to ship by that time. Amazon's Echo Dot was refreshed last year, so it could be updated again on Tuesday if Amazon sticks to an annual refresh. The Echo Show 5 was updated over the summer, though, so it's unlikely we see an update to that.

But these gadgets don't make up a significant part of Amazon's revenue. Instead, they're a way for people to use Amazon's services, such as Amazon Music, Prime Video, Audible and Alexa. And they can be used to buy things from Amazon.