For Childcare Workers, Vaccine a Personal and Professional Relief

"We’ve been open since June and right on the front lines there ... Our families are going to work so they need childcare"

Explaining childcare during the COVID-19 pandemic is a tough assignment — even for some educators.

“It’s been really, really ... oh my god. A challenge. That’s the word. A challenge," said Dania Gil, one such educator at a private learning center in Roxbury.

“A lot of people have had COVID," she says. "That’s how we’ve been impacted and one of the reasons we need to get vaccinated."

She, along with other childcare workers, K-12 educators and school staff received vaccinations at state mass vaccination sites Saturday. For the first time, they were the only groups allowed, and it won't be the last. Educators will also be prioritized on April 3, April 10 and April 11.

"We were really waiting in line and we kept getting pushed back further and further, and then when they recognized all teachers and included us in that, that was really rewarding," Gil says.

Teachers have been in the headlines for getting vaccinated as officials debate bringing students back into classrooms full-time. But many educators have been at work full-time for much of the past year, taking care of children whose parents cannot stay home with them and work remotely during the pandemic.

For Pam Penton, owner of Meeting House Child Care Center, getting vaccinated is a personal and professional relief.

"We have 44 kids. We’ve been open since June and right on the front lines there. Full time. All the time. Our families are going to work so they need childcare."

"Everybody can just kind of move on with what we need to do for the children, society and ourselves. Just a glimmer of hope, really," said Kristen Parent, director of the Goddard School in Saugus.

Workers in the group are requied to use the state's preregistration system to request an appointment at one of the seven mass vaccination sites. They also must attest they are a K-12 educator, K-12 school staff or child care worker.

Teachers unions in Massachusetts are working on an emergency bill that would force the state's education commissioner to give districts until April 26 to reopen.

CVS opened eligibility for teachers in Masschusetts even earlier, on March 3, saying it was following federal guidelines.

Around the same time, the state released guidance directing elementary and middle schools that they should open for full, in-person learning in April. Since then, however, dozens of school districts, including Boston Public Schools, have received a waiver to delay a full reopening. 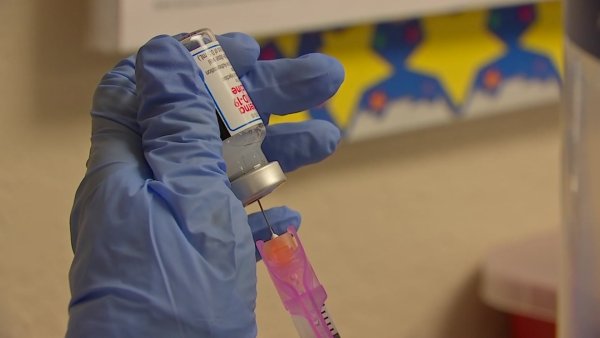 1st Mass Vaccination Day for Educators Kicks Off in Massachusetts

BPS, for one, announced it plans to bring all K-8 students back to the classroom on April 26.

"This updated timeline ensures that we have adequate time to prepare facility and transportation modifications and allows us time to communicate information to families in a timely manner," Superintendent Brenda Cassellius said in a letter to families.