Nearly 38.3 million Americans, or close to 12% of the U.S. population, have received at least one dose of the vaccine, and 14 million have received both shots

A paralyzing winter storm wrought havoc with COVID-19 vaccination efforts around the country on Tuesday, forcing the cancellation of appointments and delaying vaccine deliveries just as the federal government rolled out new mass vaccination sites aimed at reaching hard-hit communities.

FEMA opened its first COVID-19 inoculation sites in Los Angeles and Oakland, part of a broader effort by the Biden administration to get shots into arms more quickly and reach minority communities hit hard by the outbreak.

The developments came as the vaccination drive ramps up. The U.S. is administering an average of nearly 1.7 million doses per day, according to the Centers for Disease Control and Prevention.

And the administration said Tuesday it was boosting the amount of vaccine sent to states to 13.5 million doses per week, a 57% increase from when President Joe Biden took office nearly a month ago, as well as doubling to 2 million the weekly doses being sent to pharmacies.

Heavy snow and frigid temperatures continue to grip much of the nation, with weather advisories stretching from the northeast to the southwest. More than ten deaths have been blamed on the weather and millions of people have been forced to endure the cold conditions without power. The deep freeze is also hitting the Deep South, where states like Texas and Mississippi saw rare snowfalls as powerful storms caused damage across the Carolinas Monday night.

At the same time, coronavirus deaths are down sharply over the past six weeks, and new cases have plummeted.

Snow, ice and bitter cold forced authorities to halt vaccinations from Pennsylvania to Illinois and from Tennessee to Missouri. In snowy Chicago, Public Health Commissioner Dr. Allison Arwady said more than a hundred city vaccine sites didn’t get shipments Tuesday because of the extreme weather, leading to many cancellations.

The Biden administration said the weather was expected to disrupt shipments from a FedEx facility in Memphis and a UPS installation in Louisville, Kentucky. Both serve as vaccine shipping hubs for a number of states.

In Texas, Houston’s Harris County rushed to dispense more than 8,000 doses of Moderna’s coronavirus vaccine after a public health facility lost power early Monday and its backup generator also failed, authorities said. The shots at risk of spoiling if not given out were distributed at three hospitals, the county jail and Rice University.

Don’t mess with Texas! Despite millions of Texans being without power and heat during record snowfall and low temperatures, some North Texas families found a way to make the most of the winter weather with some fun in the snow.

“It feels amazing. I’m very grateful,” said Harry Golen, a 19-year-old sophomore who waited for nearly four hours with his friends, much of it in the frigid cold, and was among the last people to get the shots — which otherwise wouldn’t have reached students until March or April.

More than 400,000 additional doses due in Texas now won’t arrive until at least Wednesday, officials said.

Geisinger, one of Pennsylvania’s largest health systems, canceled vaccine appointments scheduled for Wednesday and Friday at several locations after the CDC told state health officials that shipments would be delayed because of severe weather.

Vaccine shipments were also delayed in Ohio and in Missouri — where snow, ice and bitter cold forced cancellation of mass inoculation events scheduled for this week.

A winter storm that swept across the country has left millions without heat and electricity in Texas. NBC Boston meteorologist Chris Gloninger joined LX News to explain what’s causing these extreme conditions and why Texas has been so hard hit.

In California, though, two new FEMA sites began mass vaccinations. In the early morning in Los Angeles, several dozen cars were already lined up with people sitting inside, reading newspapers and passing the time, a half-hour before the 9 a.m. opening of the nation's first site run with assistance from the Federal Emergency Management Agency.

Troops in camouflage fatigues stood around the sprawling parking lot at California State University, Los Angeles, where some 40 white tents were erected and dozens of orange cones put in place to guide traffic.

The site, set up in heavily Latino East L.A. as part of an effort to reach communities that have suffered disproportionately during the crisis, aims to vaccinate up to 6,000 people a day. Another site opened at the Oakland Coliseum, near working-class Black and Latino neighborhoods.

Hard-hit California has overtaken New York state for the highest death toll in the nation, at over 47,000.

The Los Angeles site is “proximate to a community that has been disproportionately impacted by this pandemic,” Gov. Gavin Newsom said. “The effort here is to address that issue forthrightly.” 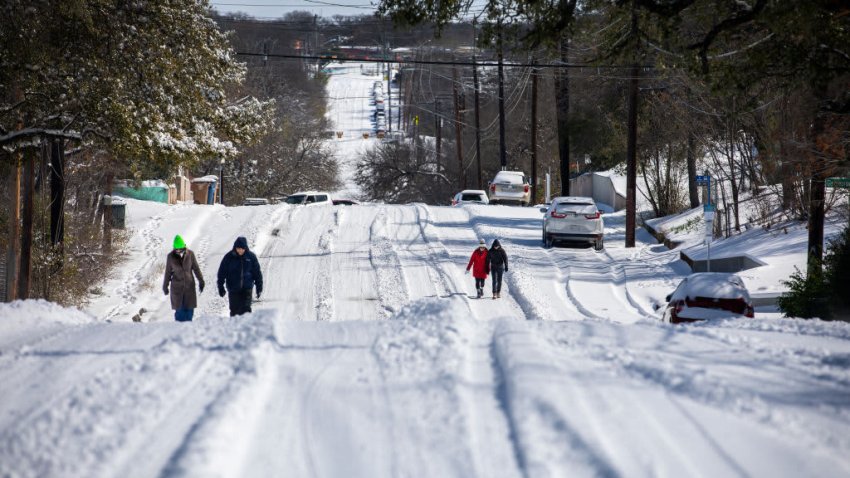 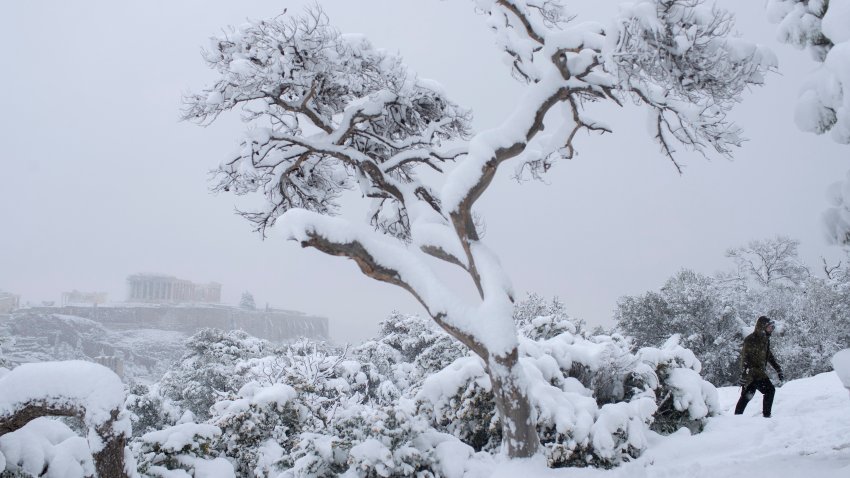 Elsewhere around the country, the virus put a big damper on Mardi Gras in New Orleans. The French Quarter’s Bourbon Street, where the rowdiest partying usually takes place, was blocked off with police barricades. Bars were ordered closed, a year after Mardi Gras crowds were blamed for a severe outbreak of COVID-19 in Louisiana.

“It’s hard to wrap my head around it,” New Orleans lawyer Dave Lanser, wearing a luminescent green cape and a black mask with a curved beak, said as he looked up and down a nearly empty Bourbon Street. But “I don’t think there’s a way to safely do it this year,” he said. “So, I support canceling the parades, closing the bars, all that kind of stuff."

Nearly 39.7 million Americans, or about 12% of the U.S. population, have received at least one dose of the vaccine, and 15 million have gotten both shots, the CDC said.

The massive weather system has sent temperatures plunging from coast to coast.

Still, some public health experts warn it’s far too early to declare the virus is on the wane. For one thing, they are worried about the more contagious variants that are taking hold.

Dr. Ronald Hershow, director of epidemiology at the University of Illinois-Chicago School of Public Health, predicted there will be upticks.

“Honestly, I would be surprised if we can point to this recent downturn as the moment in time where we turn the corner and everything’s downhill from here,” he said.