While that stark divide often reflects the preferences of parents, it’s one that could further exacerbate inequities in education

Missi Magness wanted her children back in school.

The parent of a first-grader and a sixth-grader who attend schools on Indianapolis’ southeast side struggled trying to oversee her children’s schooling while working from home this spring.

Many other local parents agreed. Now, their school district, Franklin Township — where two-thirds of the 10,000 students are white, as is Magness — has allowed younger children to return to school buildings full time.

But two districts over, it’s a different story. In Indianapolis Public Schools, where nearly three-quarters of about 26,000 students in traditional public schools are Black and Hispanic, the school year started virtually — despite relying on the same local health guidance as Franklin Township.

Although schools are busy adding safety precautions as students prepare to return, there are steps parents can implement themselves before their kids leave home. One Medical’s Dr. Navya Mysore, a family physician, shared her recommendations with LX News.

That dynamic is playing out across the country: Districts where the vast majority of students are white are more than three times as likely as school districts that enroll mostly students of color to be open for some in-person learning, according to an analysis conducted by The Associated Press and Chalkbeat.

While that stark divide often reflects the preferences of parents, it’s one that could further exacerbate inequities in education.

In every state, the AP and Chalkbeat surveyed the largest school districts in each of four categories set by the National Center for Education Statistics: urban, suburban, town and rural.

Survey responses from 677 school districts covering 13 million students found that most students will begin the school year online. That’s the case for the vast majority of the nation’s biggest districts, with the notable exception of New York City. But the survey shows that race is a strong predictor of which public schools are offering in-person instruction and which aren’t.

The higher a district’s share of white students, the more likely it is to offer in-person instruction — a pattern that generally holds across cities, towns, suburbs and rural areas.

NIAID Director Dr. Anthony Fauci says as we do more indoor things in the Fall, we are likely to see an uptick in COVID-19.

Across the surveyed districts, 79% of Hispanic students, 75% of Black students, and 51% of white students won’t have the option of in-person learning.

In Forrest County, Mississippi, two school districts separated by a river are going in opposite directions to start the year. In the Hattiesburg Public School District, where the student body is 90% Black, classes are starting online. But students are going back in person in the Petal School District, which is 73% white.

For some students, continued distance learning raises risks they will fall behind peers who are learning in person. Many districts say virtual instruction will be much improved from the spring, when projections show some students lost the equivalent of several months of learning. But teachers acknowledge that the experience still can’t replicate in-person school, especially for young students.

Students learning from home also will lose reliable access to free or subsidized meals, special education services and other in-person support. While wealthy families may be able to pay private tutors or therapists to fill the gaps, others will go without.

“I do worry about that and the fact there are these correlations between what schools are doing and students’ backgrounds,” said Jon Valant, a senior fellow focused on education at the Brookings Institution. “Which is not to say necessarily that anyone is making the wrong decisions. It suggests that we need to be seriously thinking about major public investments to try to mitigate some of the harm from all of this.”

Lisa Morgan, president of the Georgia Association of Educators, talks about the risks of bringing kids back to school prematurely as cases of coronavirus in her school district continues to climb.

There are a number of possible explanations for the racial divide. One is politics. Schools in areas that supported President Donald Trump in 2016 are more likely to open in person, the AP/Chalkbeat and other analyses show.

Another potential reason: School officials are responding to families. National and state polls show that Black and Latino parents are more likely to be wary of returning to school in person than white parents. That likely reflects the disparate toll of the pandemic, with people from those communities dying at higher rates from COVID-19.

“We believe they are taking our best interests at heart to keep everyone safe,” said Maira Velazquez, a Hispanic parent who was interviewed in Spanish and whose children go to school in the Manor district in suburban Austin. The district — which is about 66% Hispanic, 20% Black and about 7% white — will teach students virtually through at least mid-October.

Other factors are also influencing reopening decisions, including the severity of local virus outbreaks, school districts’ ability to pay for costly safety precautions, the willingness of teachers and their unions to return to buildings, and the guidelines set out by public health officials.

In the Norristown Area School District, outside Philadelphia, schools will teach students virtually until at least January. The school district serves around 7,700 students, of whom 42% are Hispanic, 33% are Black and 15% are white.

Georgia State Sen. Ben Watson joined LX News to discuss the surge in coronavirus cases in his state. The Republican lawmaker said he thinks in-person learning for children is crucial after a viral photo of a school’s crowded hallways sparked criticism about reopenings.

While the surrounding county’s coronavirus test positivity rate is hovering around 3% — below the 5% level that federal officials have offered as a safety threshold — the rates in the district itself are more than three times higher.

School officials were “very cognizant” that the communities they serve have been disproportionately affected by the virus, according to superintendent Christopher Dormer, who also cited the district’s funding shortfalls and older buildings as playing a role in the decision to stay online.

“I’m not going to be the superintendent that risks anyone’s life on a what-if,” Dormer said.

Tiffany Shelton, who has a high school senior and a second-grader, supported the district’s decision to start virtually.

Although she wishes it could have brought back older students and she knows her daughter, Cydney, will be disappointed to miss out on traditions like homecoming, Shelton, who is Black, has a heart condition that makes her more vulnerable to the virus.

“I don’t want to get sick because I won’t make it,” Shelton said.

Dr. Anthony Fauci, the Director of the National Institute of Allergy and Infectious Diseases (NIAID), discusses the tough decisions parents must make about sending their kids back to school amid the coronavirus pandemic.

Now, though, she must juggle the needs of her children while working for an equipment leasing firm from home. On a recent Thursday, Shelton took business calls while keeping a close eye on her 7-year-old, P.J., as he listened to his teacher talk about how to be kind online.

The route each school district has chosen has taken on political significance, particularly after the Trump administration strongly encouraged schools to fully reopen for in-person learning.

“It really looks like there is something about political ideology, and in particular support for Trump in 2016, that explains a lot about these decisions that districts are making,” said Valant, who published an analysis showing that school districts in counties that voted for Trump were much more likely to reopen schools for in-person instruction.

That could help explain some of the overlapping relationship with race, as Black and Latino communities were much less likely to support Trump.

But some more liberal white communities are reopening schools, too. 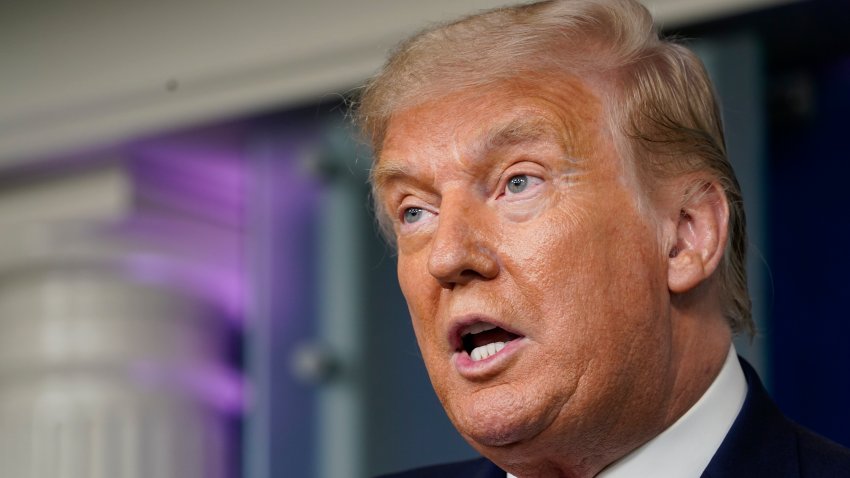 'No Big Thing': Trump Says Everyone Knew Coronavirus Was Airborne in February, But Scientists Weren't So Sure at the Time 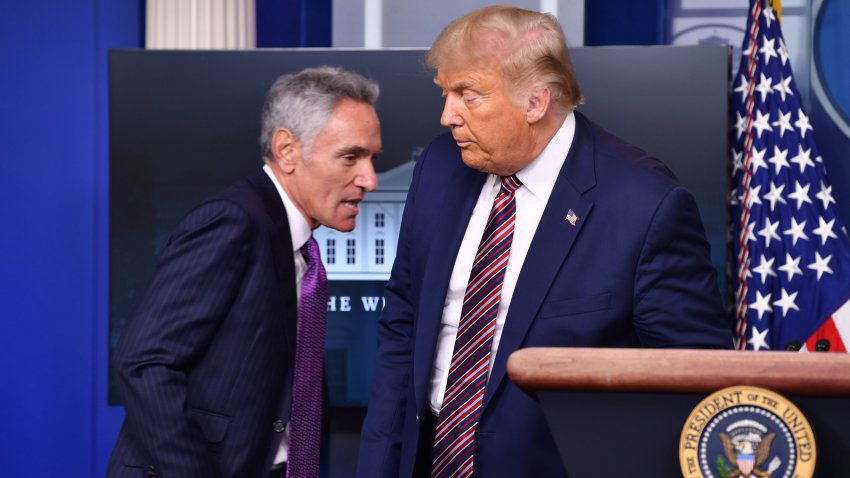 For example, the North Shore school district — based in a wealthy, majority-white suburb of Chicago that the superintendent describes as “extremely” liberal — is returning on a hybrid model.

“We simply said: We’re coming back, whether our neighbors do or not,” superintendent Michael Lubelfeld said, “and here’s how.”

The “how” involved spending up to $3.4 million on things like upgrading air filters, improving ventilation, renting 20 tents to allow for outdoor learning, and paying for asymptomatic testing for staff in the district, which serves 3,900 students in kindergarten to eighth grade.

Schools that are staying online are also investing large sums, in the hopes of reducing the risk their students fall behind.

In Norristown, the district has given a device to every student, and teachers are providing about three hours a day of live video instruction, unlike in the spring, when they prerecorded their lessons.

But much remains out of teachers’ control. Last week, Norristown music teacher Jemma Malkasian stood in front of her laptop and waved her arms, exhorting her orchestra students to act out “presto,” the musical notation meaning “very quickly.”

“I don’t see anyone moving,” she said. Her connection was glitchy, and the students kept freezing on screen.

In Memphis, where 95,000 students in traditional public schools will be learning online until further notice, the school district is spending tens of millions of dollars on laptops and tablets. Officials in the district, where the vast majority of students are Black or Hispanic, have distributed more than 85,000 devices and will be offering several hours a day of live video classes — unlike in the spring, when schools relied heavily on paper packets and televised lessons.

Memphis parents like Iesha Wooten are trying to make it work, but it’s a heavy burden. Wooten, who is Black, is overseeing virtual schooling for her three sons, a niece and two nephews.

She’s turned a bedroom in her home into a classroom, complete with an alphabet chart, and set up a workstation for each child. Their first day of virtual school consisted of hours of questions — Is my teacher going to call me? Where’s the link to my next class? — and troubleshooting issues like dead laptop batteries.

Wooten found it difficult. But one of her sons has asthma and another has sickle cell disease, putting them at higher risk for severe complications from the coronavirus.

It comes down to this, she said: “I wouldn’t want them at risk.”

For Chalkbeat, Belsha in Chicago, Matt Barnum in New Hampshire, LaMarr LeMee in Washington, Laura Faith Kebede in Memphis, and Stephanie Wang in Indianapolis contributed. For The Associated Press, Rubinkam in Norristown, Pennsylvania, Jim Vertuno and Acacia Coronado in Austin, Texas, and Fenn and Derek Karikari in New York contributed.