“The idea was young people could create messages of hope, peace and patriotism and create a giant mosaic, which is half the size of a football field,” Rick Rendon said.

People walking on the Boston Common on Saturday got a chance to appreciate an 9/11 art project put together in the weeks after the Sept. 11, 2001 terrorist attacks.

Rick Rendon and his volunteers stitched together 50,000 pieces of red, white and blue cloth with uplifting messages written by students grades K-12, that made up a large US flag.

“The idea was young people could create messages of hope, peace and patriotism and create a giant mosaic, which is half the size of a football field,” said Rendon.

The flag had been displayed a few times before, including at the 10th anniversary of the attacks, meant as a tribute to the victims and heroes of that faithful day, so people may never forget.

“I saw the sign earlier and immediately remembered it,” said Kelsey Taylor, one of 50,000 students from across Massachusetts who drew on a 6-inch-by-6-inch white cloth when she was in second grade in Lowell.

“To me it was a drawing. Didn’t really know fully what that meant as a second grader, but to see this laid out, it means so much,” she said.

Ed Scheinbart took time to read and photograph the messages on the flag, messages he said touched his heart and give him hope the younger generations will be able to carry the country forward.

“People reaching out as they have in these messages to first responders that they don’t even know, shows that these bad people never, never win,” said Scheinbart.

Family and city officials gathered at the JFK Presidential Library in Boston on Saturday, on the 20th anniversary of the 9/11 attacks, to honor the lives lost with ties to Massachusetts.

What happened in the U.S. 20 years ago continues to resonate across the world -- moments that brought people together said Ellie Anderson, who was visiting Boston from the U.K.

“Even from the U.K. we see it on U.K. Screens always around September. I think we always need to remember the courage on one thing we can all unite about,” said Anderson.

“It’s just such a crazy time in American history and we just can’t forget the people who lost their lives, that survived and helped so many survive,” said Taylor. “I’m just thankful that I’m ok and my family is ok here but I’ll never forget.”

Organizers said they plan to move the flag display to Washington for the 25th anniversary in 2026. Rendon hopes to preserve the flag as long as possible. 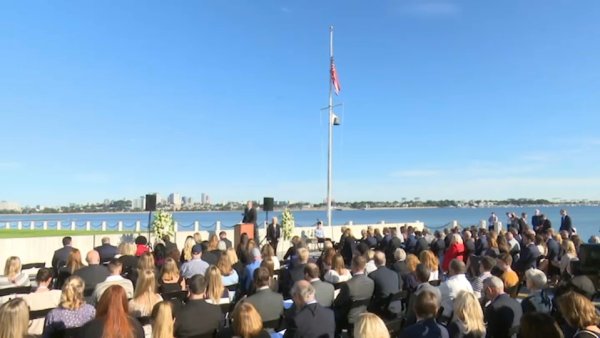 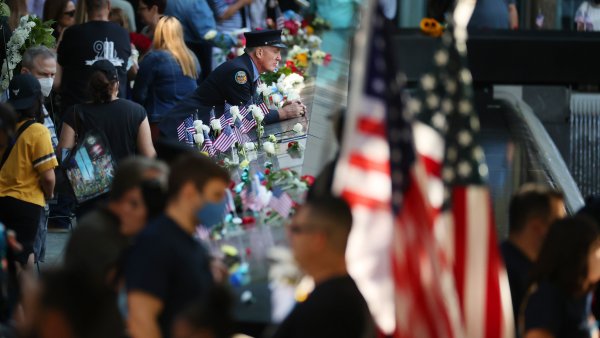