Bill to Give Mass. an Official Dinosaur Strides Over First Hurdle

The process to pick an official dinosaur started with an online survey that Rep. Jack Patrick Lewis circulated, where Podokesaurus holyokensis beat out Anchisaurus polyzelus in a vote

Legislation establishing the Podokesaurus holyokensis as the official dinosaur of Massachusetts cleared its first committee Tuesday and the lawmaker behind the effort hopes the forward movement will help teach onlookers about the legislative process.

Rep. Jack Patrick Lewis, the lead sponsor of the bill (H 3190), has been using the effort to create an official dinosaur as way to help young kids understand the how ideas can turn into laws. The State Administration and Regulatory Oversight Committee unanimously voted to report the bill out favorably Tuesday during an executive session, potentially teeing it up for future floor action.

"This is a bill that has generated more excitement and had more energy behind it than I ever could have imagined," Lewis told the News Service. "I am happy, actually overjoyed that this first legislative hurdle is now behind us. But I'm also very aware that the legislative process is a deliberative one and that this is the first of several steps to get this bill to the finish line and hopefully to the governor's desk."

The process to pick an official dinosaur started with an online survey that Lewis circulated in January where people voted between the Podokesaurus holyokensis and Anchisaurus polyzelus. The former received more than 60% of roughly 35,000 votes, The Associated Press reported.

The Podokesaurus -- also known as the swift-footed lizard -- was roughly three feet long and lived about 180-195 million years ago, according to the United Kingdom's National History Museum. 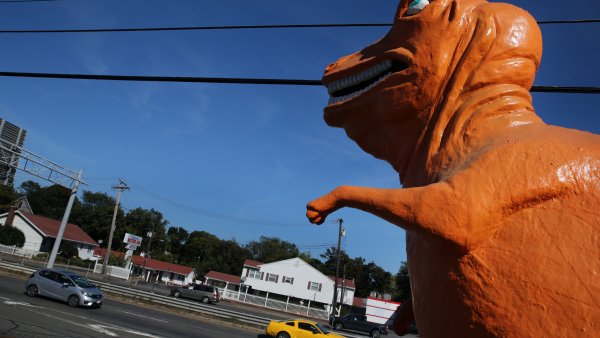 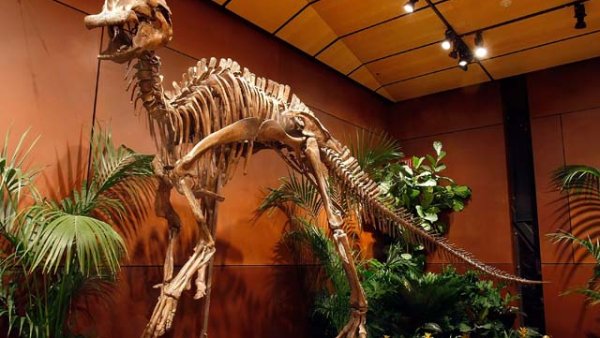 It was a carnivorous dinosaur that existed during the mid-Jurassic period and its bones were initially found in 1910 near Mount Holyoke by Mignon Talbot, the first woman to name and describe a dinosaur. Bones are incredibly rare to find in Massachusetts, said Alfred Venne of the Amherst College Beneski Museum and Bassett Planetarium, and the set Talbot found were extracted from glacial debris.

Venne, who has been involved with the state dinosaur initiative, said the original set of bones Talbot discovered more than a century ago were lost in a fire at Mount Holyoke College's Williston Hall in 1917.

"She had actually considered having it brought over to Yale for it to be put in that collection, but they insisted that she be the person that describes it and it go into the Mount Holyoke collection," Venne said. "The good news is a few casts were made of the original, one of which Mount Holyoke has and we have one here at the Beneski Museum as well."

Australian scientists revealed this week that they have identified dinosaur bones found in Australia’s outback as belonging to Australotitan cooperensis, the largest dinosaur to be found in Australia and in the top 15 largest worldwide.

After Lewis filed the bill in early February, the Legislature referred it to the State Administration and Regulatory Oversight Committee which held a hearing on the matter in early June. While Tuesday's committee vote represents progress, the legislation still needs to clear other committees and several floor votes in the House and Senate and receive a signature from the governor in order to become law.

"We will continue the process of helping young folks understand ... that bills don't just go from good ideas to a floor vote within a couple days or weeks, but that every bill regardless if it's one to name a dinosaur or a bill to reform the public school funding formula, there is a deliberative process," Lewis said.

The push to create an official dinosaur has generated a spike in popularity around finding fossils and tracks in Massachusetts. Industry experts who previously spoke to the News Service voiced concerns that the popularity may lead people to seek out fossils or tracks without permission and keep them in private collections. Laws protecting the fossils, they said, are vague and outdated.

Those experts, including Venne, have been pushing lawmakers to pass a bill from Rep. Daniel Carey (H 3982) that would create a legislative commission tasked with reviewing laws around recovering, studying, and protecting fossils and artifacts in the hopes of bringing more clarity to the legal language.

"I think they can and should operate in parallel and move through process and I think they only support each other," he said

In voicing concern, experts pointed to a recent incident in Holyoke where two men were accused of extracting dinosaur tracks and charged with vandalism, trespassing, and an archeological violation, according to reporting from MassLive.

Barnas Monteith, head of the Massachusetts State Science and Engineering Fair and paleontologist, said the incident in Holyoke prompted an "I told you so sort of feeling." He said the incident and the fact that it happened as he and other experts are pushing for increased penalties is a double-edged sword.

The roar of the T-Rex in the classic film “Jurassic Park” remains an iconic sound in the history of cinema, but how close is it to reality?

On one edge, Monteith said, advocates have informed people that the laws on the books are weak and people may be taking advantage of that.

"On the other hand, I think we've let people know ... that we're very serious about protecting in any means necessary, because now it is something people value in the state, more people are obviously, it's on their radar and more people are out there thinking about and talking about fossils and their importance to history and importance to our culture," he said.

Venne said laws around protecting fossils or tracks need to have more "teeth" to deter people from taking artifacts. The commission, he said, will help research what legal tools are available for experts and law enforcement to work with.

Lewis said he was heartbroken to hear about the incident in Holyoke.

"We've all been heartbroken to hear the story out of Holyoke with the dinosaur tracks," he said. "And I hope that is the last story of the kind that we ever read because we don't know what else is out there. And once things are destroyed, as is the case with the fire that destroyed the original skeleton, these things are lost."