Five dolphins were rescued Monday after getting stranded on a beach in Cape Cod, with video showing the pod being helped back into the ocean.

The dolphins were stranded in Brewster and Wellfleet, but released at Herring Cove in Provincetown, Massachusetts, according to the International Fund for Animal Welfare (IFAW), whose stranding team had local and federal help.

One dolphin, a young calf, died before staff from the IFAW was able to get to it off Brewster's Ellis Landing, the nonprofit said. Another dolphin in the group that stranded off Lieutenant Island in Wellfleet died, while two others were able to swim away.

The five rescued animals were toted to Provincetown via a mobile dolphin clinic. Video shows the organization’s Marine Mammal Rescue & Research team carting the dolphins to the water’s edge before releasing them together in two groups -- Herring Cove has easy access to deeper water.

This week has had a full moon, so extremely low tides could have been a factor in the strandings, but it wasn't clear if they were related, according to the IFAW.

A Montauk fisherman who said he's been fishing off the coast of Block Island for years describes an encounter with a whale that put a hole in his boat and sent his friend overboard.

“Summer strandings are not as common here off Cape Cod, but we have been seeing more and more over the past few years,” IFAW stranding coordinator Misty Niemeyer said in a statement. “The timing brings some added challenge with heat and summer crowds, but our team was able to work through it and get the dolphins back out to their ocean home with the help of several agencies we work so closely with.”

Cape Cod is a “stranding hotspot” for dolphins -- particularly Wellfleet, according to IFAW.

What to Know About the Provincetown Indoor Mask Mandate 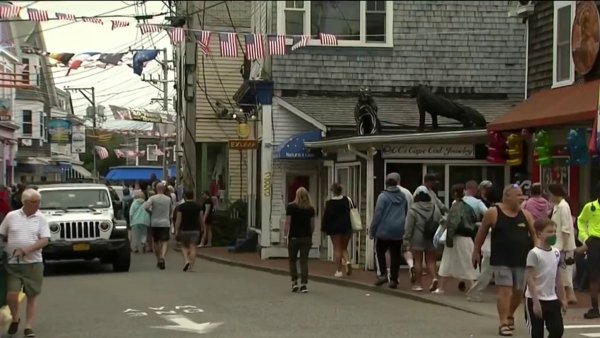