Mac Jones and Patriots Earn Big Road Win Against Jets, Get Back to .500 on Season

The Patriots snapped the Jets' 4-game winning streak, defeating New York 22-17 on Sunday to reach 4-4 on the season

The Patriots had a lot at stake on Sunday in their AFC East showdown with the New York Jets, and they were able to come away with a big road win. New England is now back at .500 on the season after defeating the Jets 22-17.

Coming off Monday night's disaster against the Chicago Bears, in which backup Bailey Zappe replaced quarterback Mac Jones after just three offensive series, many considered this about as close to a "must-win" game as you could get for a Week 8 game.

Zappe never entered Sunday's game in East Rutherford, New Jersey. Bill Belichick had said Thursday that Jones took a "full workload" Wednesday and would be ready to go for the Jets game. The Patriots coach said the play of Zappe, who went 2-0 as a starter and played the vast majority of three quarters of Monday night's loss to the Bears, had no bearing on the decision to go with Jones for Week 8.

The Pats continued their mastery of the Jets Sunday, beating them for the 13th straight time. Bill Belichick got win No. 325, passing George Halas for second place on the NFL's career coaching victories list. Belichick will appreciate reaching another coaching milestone some other time. Just getting a win was all that mattered Sunday.

"I'll have a thought on that when it's over,'' Belichick said of earning his 325th victory. "Add 'em up in the end. It's good to come down here and win. Happy for our team. I appreciate all the great players that have won those games.''

Devin McCourty had two of the Patriots' three interceptions of Zach Wilson. Nick Folk kicked five field goals against his former team, and Belichick's bunch slowed the Jets, who had won four in a row.

Belichick missed a chance to break a tie with Halas on Monday night, when New England (4-4) lost at home to Chicago 33-14. But now he trails only Don Shula (347). The victory was also Belichick's 100th in the regular season against AFC East opponents as coach of the Patriots.

"Everyone's happy for him,'' Folk said. "The league's been around something like 103 years. So for that to happen, it's a big win.''

Jones and Belichick exchanged big smiles, a hug and some words before the quarterback opened his postgame press conference by congratulating his coach on the milestone.

"Wanted to give a huge congratulations to Coach Belichick...to be his quarterback right now is a huge blessing," Jones said at the podium.

Jones finished 24 of 35 for 194 yards with a touchdown to Jakobi Meyers and an interception. Rhamondre Stevenson had 71 yards on 16 carries and caught seven passes for 72 yards.

"We hung in there," Belichick said. "Proud of the way the team stepped up on a short week here and came in and got the win.''

The Jets (5-3), who snapped a 12-game skid against AFC East opponents by beating Miami three weeks ago, couldn't change their fortunes against the Patriots -- even while debuting their stealth black alternate helmets.

"Offensively, we just kept shooting ourselves in the foot,'' coach Robert Saleh said. "Just not allowing ourselves to continue drives and stack together consecutive good plays.''

After a promising start, Wilson made too many mistakes in the first 300-yard passing game of his career -- he was 20 of 41 for 355 yards and two TDs to Tyler Conklin -- and New England took advantage.

"I had some boneheaded plays,'' Wilson acknowledged, saying his second and third interceptions were "bad plays.''

Many in the MetLife Stadium crowd that was raucous at kickoff with the Jets off to their best start since 2010 were booing by the third quarter -- and filing to the exits long before the game was over.

"It was pretty calm for MetLife,'' said Folk, who played seven seasons with the Jets.

New York made it closer on Wilson's 9-yard touchdown pass to Conklin with 1:51 left, but New England recovered the onside kick and Jones took three kneeldowns to run out the clock.

"We needed it,'' McCourty said. "It's tough. You go out there at home and you get booed and you don't really show up in any phase of the game. It was ugly for us. Chicago whupped us. We had to fast forward.''

Trailing 10-6 coming out of halftime, the Patriots marched down the field. On fourth-and-1 from the 5, Belichick went for it, and Jones found Meyers for a go-ahead touchdown.

"Very important as far as momentum and helping the defense,'' Meyers said. "They pretty much played great all day. We just had to give them a little something, a little spark.''

After Greg Zuerlein was wide left on a potential tying 45-yarder early in the third, Folk made kicks of 49, 45 and 52 yards to make it 22-10 early in the fourth.

MOMENTUM SWINGS With the Patriots trailing by seven and facing fourth-and-1 from the Jets 21 coming out of the 2-minute warning before halftime, Belichick opted to go for it. Jones' throw to Meyers fell incomplete and New York took over on downs. But Wilson was intercepted for the first time in four games when his pass floated into the hands of Ja'Whuan Bentley, giving the Patriots the ball at the Jets 40. It appeared Jones gave it right back to the Jets when Michael Carter II intercepted him and returned it 84 yards for a touchdown, but it was wiped out by a roughing-the-passer call on John Franklin-Myers.

"JFM has to be better,'' said Saleh, who added the officials explained the penalty was because the defensive end "hit him too hard.''

The Patriots ended up getting points on the drive and cutting the deficit to 10-6 on Folk's 42-yarder as time expired in the half.

UP NEXT Patriots return home next Sunday to face the Indianapolis Colts. The Jets are home again to take on another AFC East rival in the first-place Buffalo Bills next Sunday. 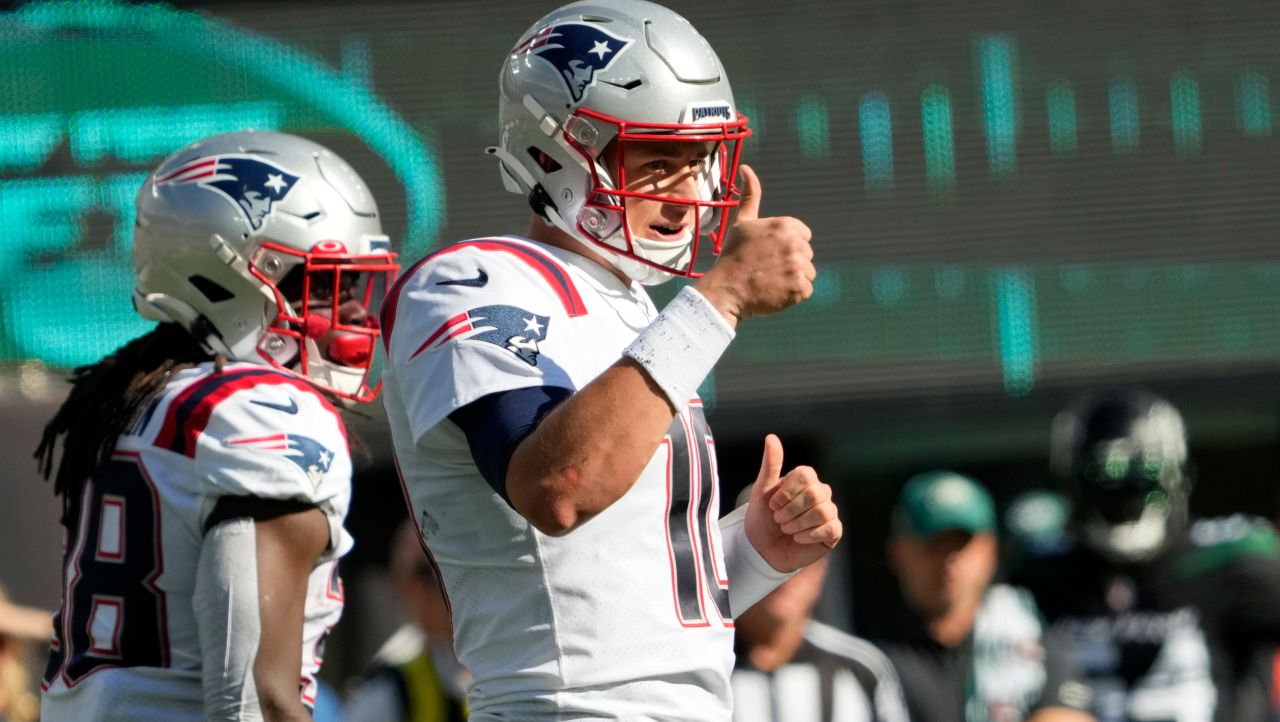 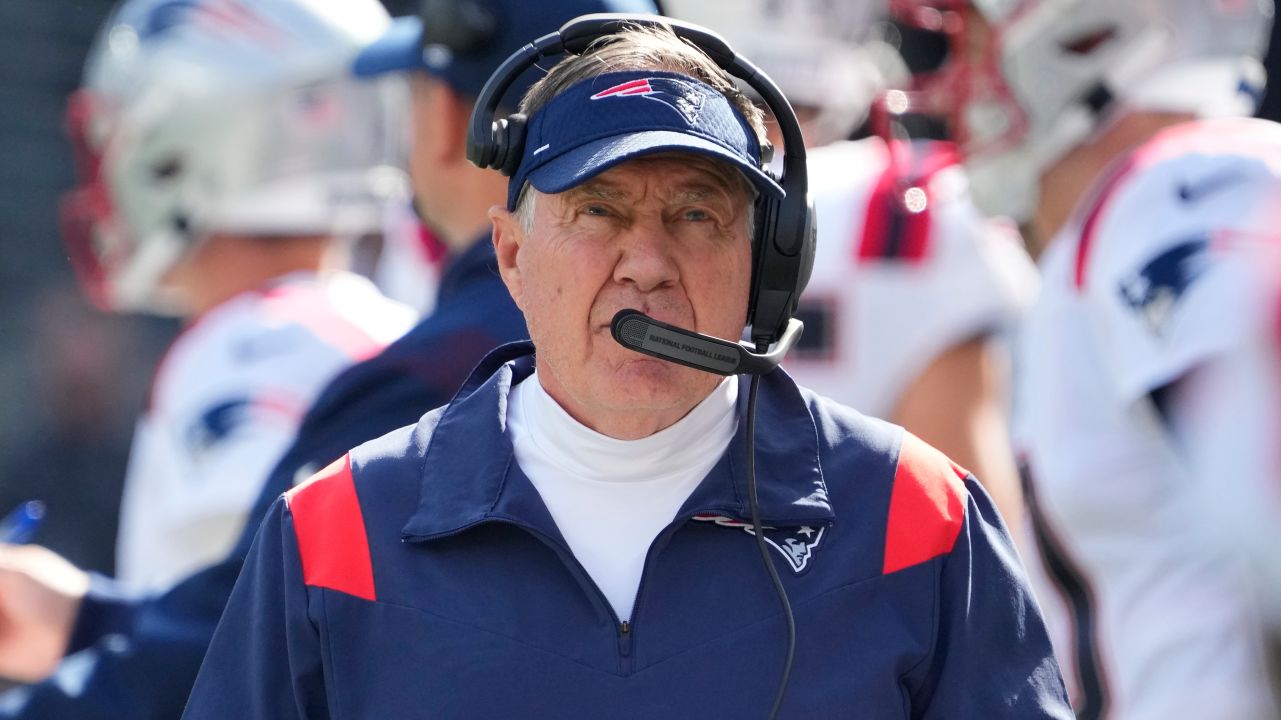 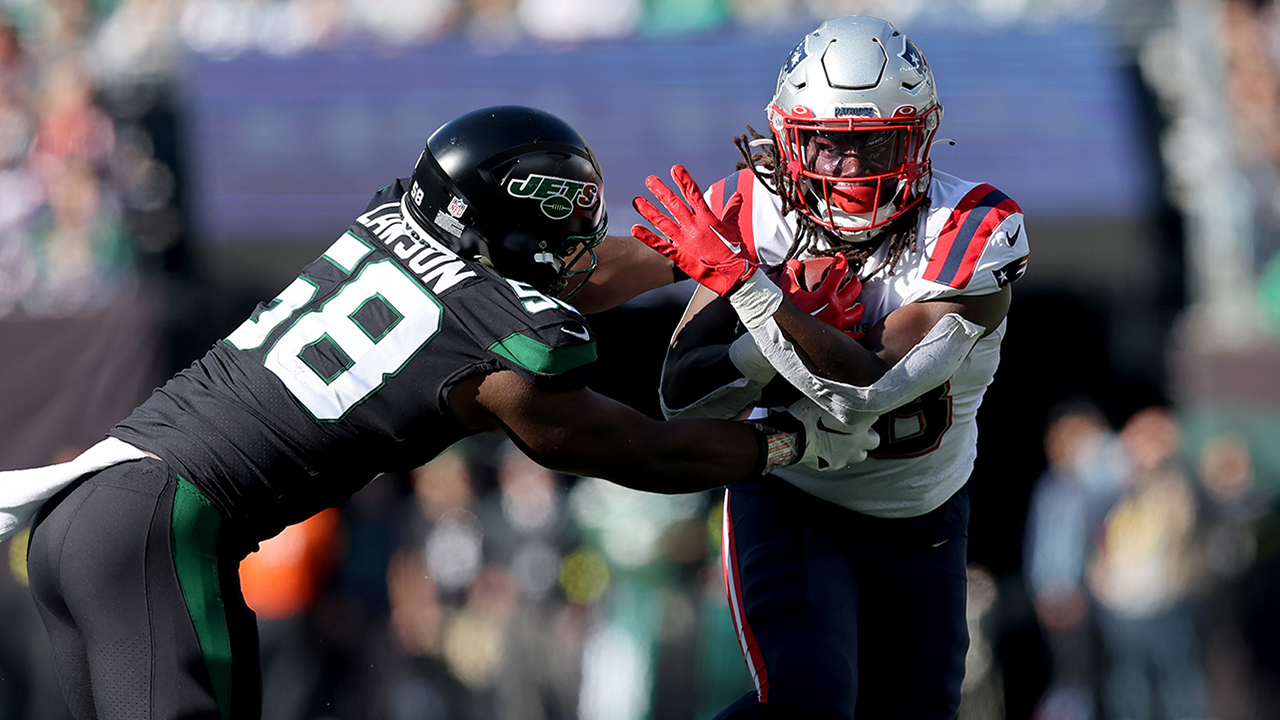 Patriots Vs. Jets Takeaways: Rhamondre Stevenson, Defense Get New England Back on Track