Billy Werth had to make emergency landing on road in Standish, Maine

A stunt pilot from Indiana was forced to make an emergency landing on a busy road in Standish, Maine, Sunday night.

He credits his survival, and the survival of the motorists below, to his decades of training and a little bit of luck.

Stunt pilot Billy Werth, 43, was in Maine for the Acadian Heritage Air Show in Frenchville. 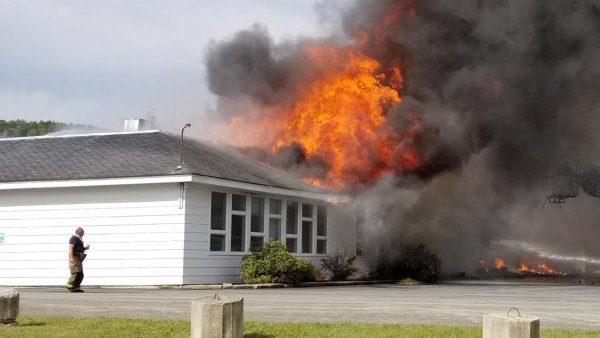 As he was flying back home after the show, he says his Eagle 540 ran into trouble at the edge of Sebago Lake.

"It started running rough, and I knew it wasn't good," recalled Werth.

After spending a few precious minutes trying to trouble shoot the problem, he realized his best option was to make an "off-airport landing." He figured he could land the 20-foot-wide plane on Route 35 by cutting the engine and rolling to a stop.

"Just as I was about 4-500 feet above ground, I noticed the power line going across the road and there were four cars coming down the road at me," he said. "I kind of assumed that because there was a tree hanging over the raod, that they weren't going to be able to see me."

That's where Werth's decades of experience and training in the U.S. Air Force came into play.

He made a last second course-correction.

"I'm thinking, 'I don't want to hit any cars.' So just above the ground, I kind of leveled off the airplane so I could miss the cars," said Werth. "The cause of the damage is the hard landing."

The plane crashed on the edge of a steep ditch.

Werth credits his five-point harness and helmet with the fact that he walked away with only two stitches in his hand.

He says he got lucky, too.

"If it was just a couple minutes north, it's all wooded! I would have had to just jump out of hte airplane and use the parachute, cause trying to land in the trees is usually pretty dangerous, that doesn't end well," Werth said.

He regrets not getting the names of the motorists who immediately stopped and helped get him get out of the damaged aircraft.

"Apology to the folks on the road for interrupting their day, thanks for getting out of my way!" he said.

After that crash, it's unlikely Werth's Eagle will ever soar again, but he says he will.

He's scheduled to perform in another air show in Rochester, New York, next weekend.

He has another plane back home in Indiana.

The FAA is investigating the crash.