A 35-year-old man from Lakeville, Massachusetts was pronounced dead on scene of the crash in Fall River and a 28-year-old Rhode Island man was taken to the hospital

A 35-year-old Lakeville man died and a 28-year-old man from Rhode Island has life-threatening injuries after a three-car crash Tuesday afternoon in Fall River, according to Massachusetts State Police.

The crash occurred around 2:30 p.m. Tuesday on Route 24 northbound at mile marker 0.8 in Fall River. The third driver, a 26-year-old man from Fall River, was not injured.

Based on preliminary investigation, Troopers believe a 2004 Ford F-250, driven by a 28-year-old man from Tiverton, R.I., was traveling southbound when the car crossed the median into the northbound lanes and struck a 2019 Chevrolet Silverado. The operator of the Chevrolet, the 35-year-old man from Lakeville, suffered serious injuries in the crash and was pronounced dead on scene.

The 28-year-old who was driving the Ford was taken to Rhode Island Hospital with injuries not believed to be life-threatening. A 2018 GMC Terrain, driven by the 26-year-old man from Fall River, was also involved in the crash. No tow truck was required as it was able to be driven from the scene by the operator and no injuries were sustained by any of the occupants.

The southbound left travel lane and northbound right travel lane were closed for about two hours due to the crash, which remains under investigation by units within the Massachusetts State Police. Troopers were assisted on scene by Fall River Fire and EMS. 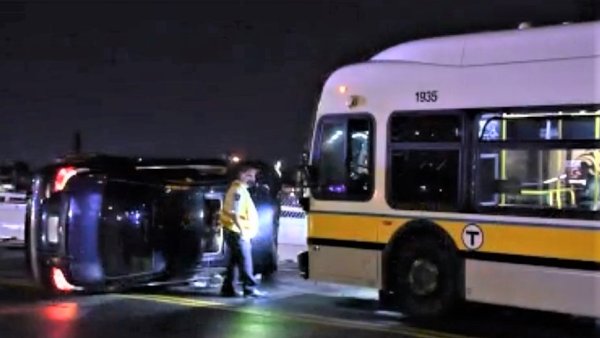 Car Rolls Over on Washington Street Bridge in Boston