How New England Voted: Election Day Across the Region

Democratic U.S. Sen. Elizabeth Warren defeated two challengers Tuesday in an election that will also decide a slew of congressional races, a gubernatorial contest and whether Massachusetts should keep legal protections for transgender people. 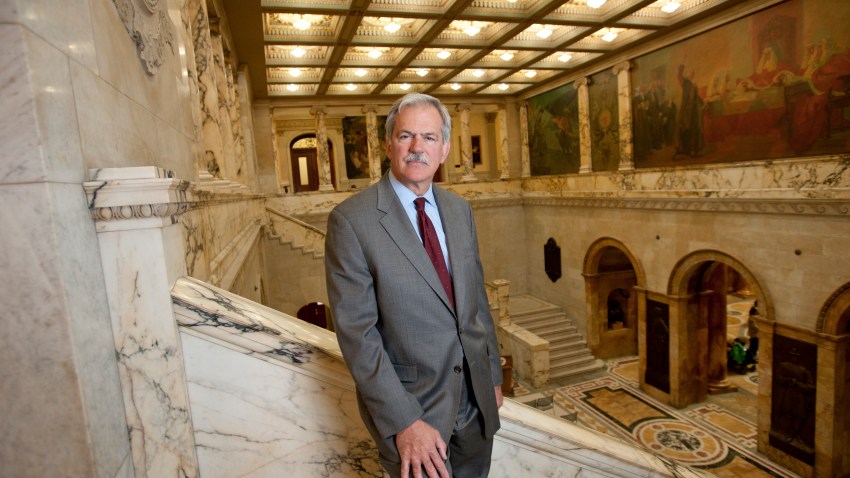 Grogan to Step Down as Boston Foundation CEO

"When I first ran for the Senate six years ago, I asked you to take a chance on someone who had never even run for office before," Warren said Tuesday night. "You took that chance, you sent me into the fight, and tonight, you told me to stay in the fight."

Now that Warren has won, expect attention to quickly turn to the 2020 election. She has promised to take "a hard look" at a possible presidential run.

Warren refused to say Tuesday that the midterm elections in Massachusetts were about President Donald Trump.

"I try to stay focused on the issues, not on division and hate," she said.

She did, however, acknowledge that the Democrats needed allies in Washington to protect and fight for "shared values."

"Today, the voters have spoken, and it seems like they like what we're doing and the way we go about it," Baker said. "So here's the good news -- that colalborative, purposeful and humble approach to governing is exactly what you're going to get from us and from our team for the next four years, and that's going to be non-stop, pedal to the metal, let it rock!"

There were also three questions on the ballot and five contested U.S. House races.

"What we are issuing here and now is a mandate for hope," she said Tuesday. "Tonight is just the beginning."

With no Republican in the race, her September victory had all but assured the 44-year-old Pressley the office, with only the remote possibility of a write-in campaign to potentially stop her. That scenario behind her, she'll now represent the 7th congressional district -- the first in Massachusetts where minorities make up a majority of the voting population.

Several Massachusetts voters said Tuesday they headed to the polls to place a check on the Republican president.

Joe Robinson, a 62-year-old Episcopal priest from Cambridge, said he was driven to vote to combat the "negativity" of the Trump administration.

He voted for Warren and Democratic U.S. Rep. Katherine Clark.

Madeleine Schulman, a writer from Brookline, said she hopes Democrats retake the House to provide a check on Trump, whose rhetoric she called "dangerous."

The 47-year-old Schulman she was disturbed by the confirmation process for Supreme Court Justice Brett Kavanaugh, who faced questions at a Congressional hearing over allegations of sexual misconduct brought by professor Christine Blasey Ford. Kavanaugh denied the allegations.

Here's a look at some of the other big races across New England on Election Day:

In New Hampshire, Democratic challenger Molly Kelly conceded to Republican incumbent Chris Sununu in the Granite State's gubernatorial race. This will be Sununu's second term as the state's top executive.

The open 1st Congressional District seat will be filled by Democrat Chris Pappas, who becomes the state's first openly gay congressman, after he defeated Republican Eddie Edwards, who would have been the state's first black member of Congress.

Also in New Hampshire, a woman who moved to the U.S. from Afghanistan has been elected to the 400-member House of Representatives, making her the first former refugee to win a seat in the state Legislature.

Wazir was 6 when her family fled the Taliban in 1997, and she spent 10 years in Uzbekistan before moving to Concord. She started high school at age 16, studying the dictionary at night and working jobs at Walmart and Goodwill. She became a U.S. citizen in 2013, and earned a business degree from Concord's community college. She and her husband have two daughters and another baby due in January.

The most expensive race was in the 2nd Congressional District where Republican Rep. Bruce Poliquin faces Democratic state lawmaker Jared Golden. That race was also too close to call.

Pingree claimed victory on Tuesday evening, and one of her opponents, independent Marty Grohman, conceded. King also declared victory, and WCSH projected him winning a second U.S. Senate term. However, the AP has not called either race.

Ranked-choice voting is being used in the federal races. The system lets voters rank all candidates on the ballot. If no one gets a majority, then there are additional rounds of tallies.

All three questions on Rhode Island's ballot passed. Question 1, approving $250 million to fund the first phase of an ambitious plan to rebuild schools, has passed. Raimondo championed it, asking voters to make a "once-in-a-generation investment to fix our schools" after years of neglect.

The race was too close to call late Tuesday night and the final results may not be known before Wednesday morning, according to Secretary of the State Denise Merrill.

Besides governor, there were battles for other statewide offices and the Legislature. In many cases, Republicans are accusing Democrats of supporting Malloy, while Democrats have accused Republicans of backing President Donald Trump.

Scott, a Republican who was named the fourth most popular governor in the U.S., has worked across the aisle in his time in office. He signed a controversial new gun law in April. And last year, after President Donald Trump announced his intention to withdraw the U.S. from the Paris agreement, Scott issued an executive order to create a climate change action commission.

Sanders, an independent who caucuses with the Democrats and ran for that party's nomination in the 2016 presidential election, will serve a third term after easily defeating Republican businessman Lawrence Zupan and seven other candidates.

Welch, who replaced Sanders in the House of Representatives, also won his race against Republican challenger Anya Tynio.

All 180 seats in the Vermont Legislature were also on state ballots.