The National Oceanic and Atmospheric Administration gave an update Friday in Plymouth on how to stay safe around whales after several recent encounters off the Massachusetts coast.

Their message is simple -- if you see a spout, watch out.

This weekend is expected to be a busy one on the waters off Plymouth, officials said, with hundreds of boaters in an area where several juvenile humpbacks have been feeding on schools of menhaden, also known as "pogies."

After a roughly 50,000 pound humpback whale breached the waters and slammed down on a fishing boat, people have been hoping to catch another glimpse of the marine creatures off Plymouth's coast. In fact, crowds had gathered before dawn Friday at Manomet Point in hopes of spotting one.

Boaters in Plymouth say that latest moment is just one of several encounters with whales over the past couple weeks. There was a close contact with a paddleboarder and a whale bumped into a boat in about the same spot last Friday.

Officials said Friday that three juvenile humpback whales have been feeding off the bait fish off Manomet Point and Whitehorse Beach for the past seven to 10 days. The large bait fish have attracted scores of fishermen, along with the boats full of spectators hoping to catch a glimpse of a whale.

"This has been a unique challenge," Plymouth Harbormaster Chad Hunter said of the balance between protecting the whales and allowing recreational and commercial fishing to continue.

Bob Glenn of the Massachusetts Division of Marine Fisheries said the whales can be "very unpredictable" when feeding on menhaden, creating a hazard for both whales and humans.

"These animals can weigh 40,000 to 60,000 pounds depending on their age," he said. "A collision or interaction with these whales can cause severe damage to vessels, injury to the whales and even severe injury and death to any human who happens to be hit by them."

"We understand these are majestic animals and the public would like to view them," he added. "That's fine, but they need to do that from a safe distance."

“These are young humpback whales, like any young animals including humans, they tend to be higher risk takers," Executive Director of Whale and Dolphin Conservation Regina Asmutis-Silvia said. "They are not looking for boats. They are looking for food.”

She encouraged boaters to stay at least 100 feet away from the whales, to keep speeds down and to turn off their motors when whales are nearby. And she said the safest way to watch them is from land, with binoculars and cameras.

"The interactions we've seen recently jeopardize the safety of everyone involved," Asmutis-Silvia said. "We're very glad no one was hurt, but there can be significant damage. You think hitting a car with a deer is a bad idea, think about a fiberglass boat with a whale."

Experts said it is somewhat unusual for the menhaden to stay in one area for this long, and there is no telling when they might choose to move on, likely taking the whales with them.

But for now, the area is abuzz with whales -- and whale watchers -- according to the manager of Captain John Boats.

"It's been crazy," Erin Hyslop said. "Everybody is seeing everything all over Facebook, all over the local news."

Unai Barriola and his family are visiting from Spain and hoping to see whales in the area.

And there's a good chance they'll see them because whales have been coming closer and closer lately.

"I had a whale go under my boat last Friday morning," fisherman John Hallisey said.

"I've had them under my boat, beside the boat, and even got the mist when they blow," fisherman Robert Athanase said.

The close encounters that have gone viral had officials putting out a warning to stay back.

Those who don't obey risk facing a fine or even jail time. Fishermen say they know the rules, but with the whales popping up out of nowhere, they say there's only so much they can do.

"You try to do everything you can but you're not going to tell a whale to move, you're not gonna do that," fisherman Anthony Cappuccio said. 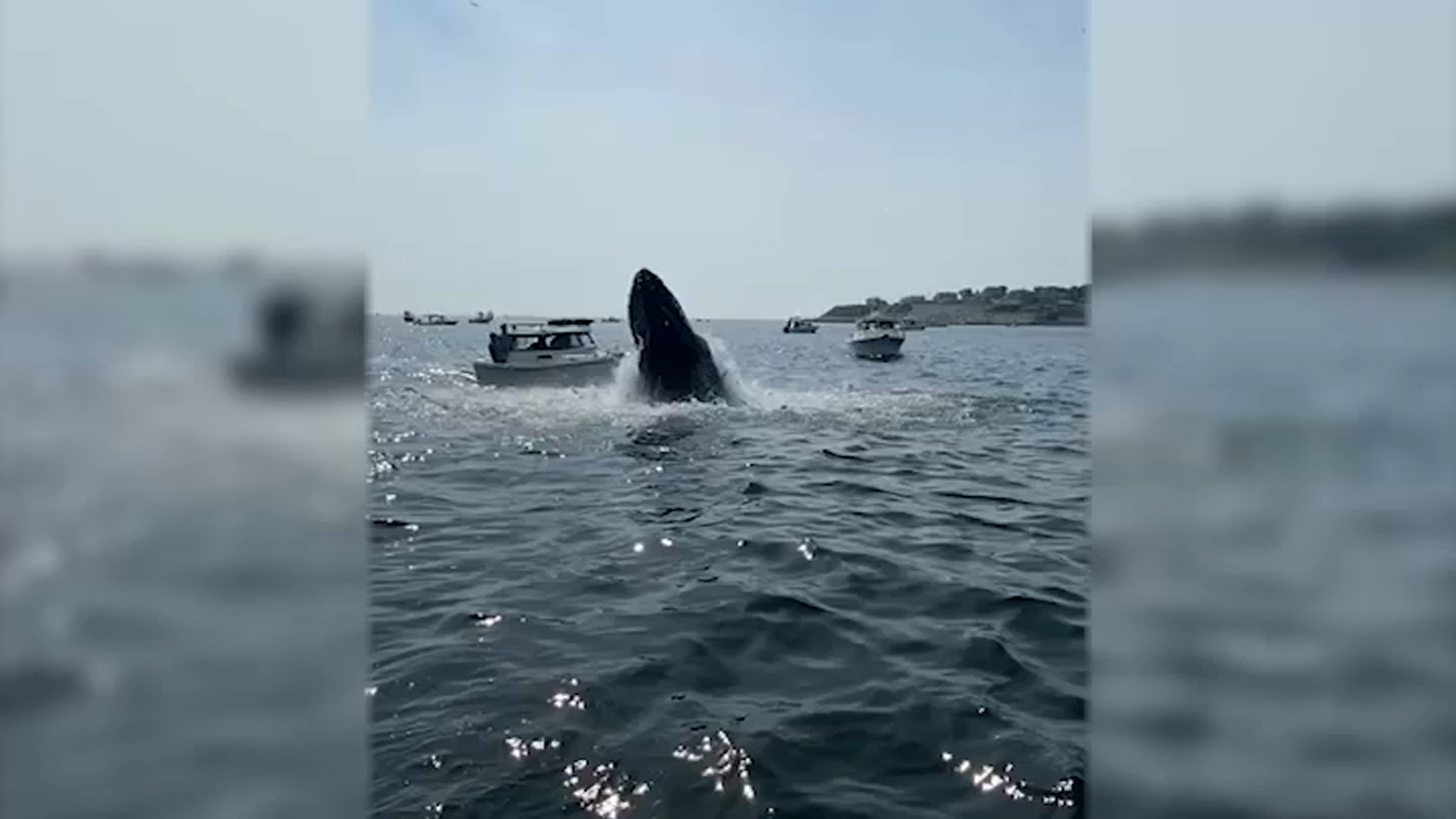 Whale Uninjured After Jumping on Boat in Plymouth 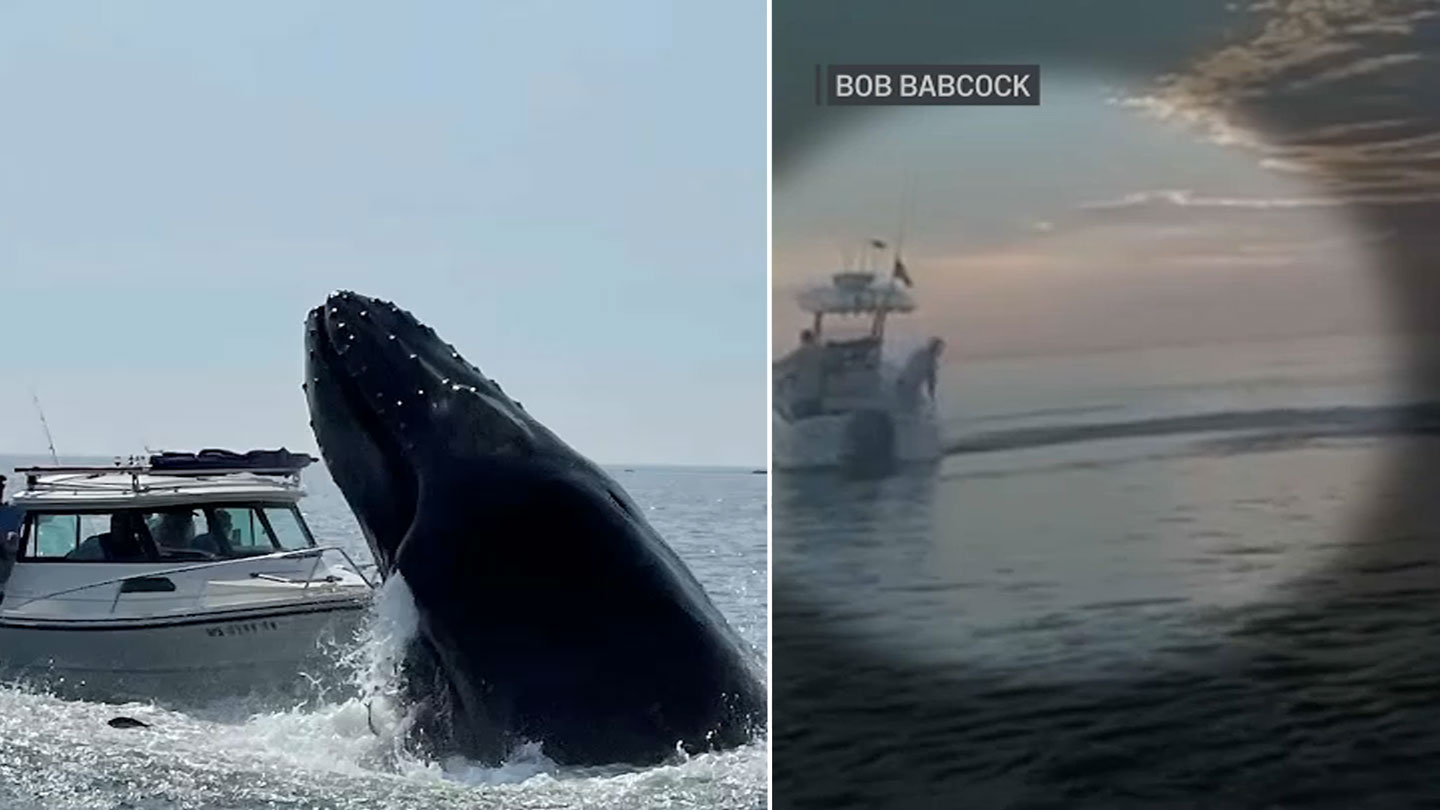 What's Bringing All These Boat-Bumping Whales to Plymouth?