A 26-year-old man was shot after multiple people forced their way into his first floor apartment in Dudley, Massachusetts overnight, according to authorities.

A woman and two children were inside the apartment, located at 12 Green Street, when it was broken into around midnight, according to Dudley Police Chief Steve Wojnar.

There was a confrontation between the man and the people who broke in. The suspects fled the scene on foot after the shooting. The man was taken to UMass Hospital in Worcester with a gunshot wound and is expected to survive.

"Definitely serious condition, but looks like he should be able to recover at this point," the chief said. "We're actively looking for anybody that's involved."

Anyone with information or possible video evidence is asked to contact the Dudley Police Department a 508-943-4411.

When asked whether there is a concern for the general public, the chief said the break-in and shooting was "not a random act."

"It doesn't appear to be a random act at this point," Wojnar said. "Certainly we have asked everybody to just take necessary precautions and call us if there's any issues, but at this point in time it looks like it's not a random act."

An investigation is underway by Dudley police and the Massachusetts State Police. The Webster and Oxford Police Departments also helped respond to the incident. 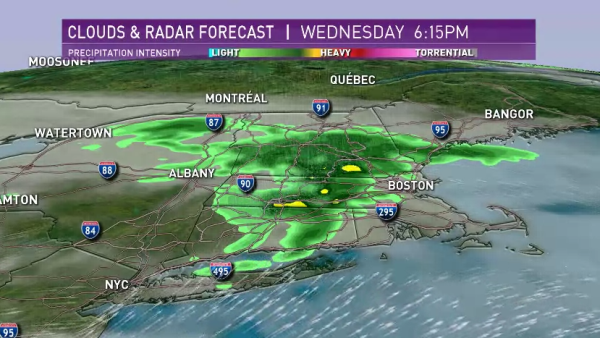 Pattern of Showers, Thunderstorms to Stay Through Friday