Two businesses were held up four days apart in Dedham, Massachusetts, this week, and local police say they may be related.

Both involved a man in a ski mask, and the second incident resulted in a gas station clerk being shot in the leg, according to Dedham police.

"It is possible that these robberies are related," police said in a statement Friday. 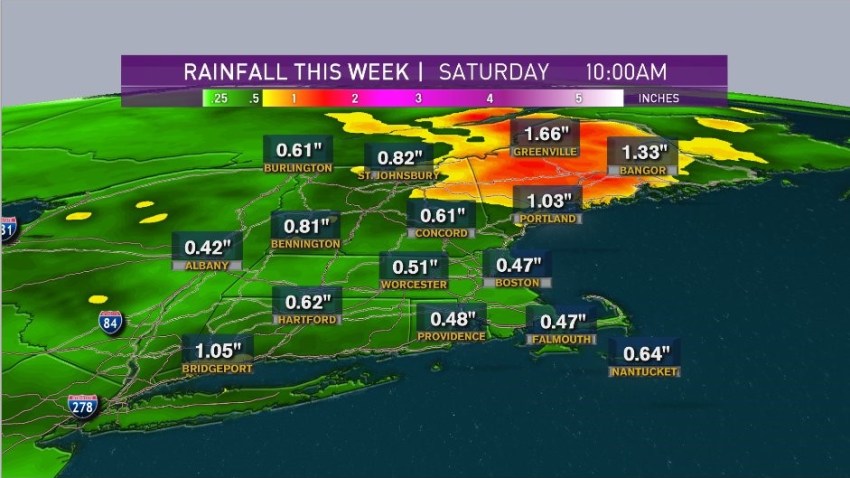 Showers, Some Snowflakes Moving Through But Wednesday Is Not a Washout

In the first incident, at Terri's Market on Louise Road Monday about 8:40 p.m., a roughly 5-foot-5 man in a ski mask and said to be speaking with a Spanish accent threatened a clerk with a handgun, police said. He stole cash from the store and fled.

Police continued Friday to search for two suspects following a gas station shooting earlier in the day in Dedham, Massachusetts.

Then on Thursday, two men demanded money at the Sunoco gas station on Ames Street before 11 p.m., police said. A taller man, armed with a handgun and wearing a black mask, shot the station's clerk. He was with a smaller man in a black ski mask.

The bullet went through the clerk's leg and hit a Diet Coke bottle, according to longtime station owner Jack Audy.

The wounded clerk is expected to recover; police didn't say if the would-be robbers made off with any money.

Heavily armed police arrived soon afterward and searched the area for hours but didn't find anything. Investigators now have surveillance video of both incidents.

Anyone with information about the incidents is asked to call Dedham police at 781-326-1212.