Last month in Maine, one of the purple jellyfish measuring a whopping five feet across was found on the shore

As if we didn't have enough to worry about or keep away from these days, Massachusetts' parks department warned people at Nahant Beach to look out for potentially dangerous jellyfish on Friday.

Lion's mane jellyfish can sting you whether they're alive or dead, and recently, especially large ones appeared on the coast of Maine, puzzling a scientist who tracks tracks them. The presence of lion's mane jellyfish prompted the purple flag warning at Nahant Beach, indicating that dangerous animals are in the water.

"They are pretty scary," beachgoer Jeval Vlumsack said Friday at the beach, where she was seeing lots of children.

"Hopefully none of the kids get stung, that is my biggest worry," she said.

Many of the home remedies often recommended to treat jellyfish stings can actually make it worse. The Mayo Clinic advises that people keep it simple and don’t use urine or scrape the skin.

By Friday evening, authorities hadn't said anyone was stung. People were picnicking and playing in the water, and not everyone was worried about what might be lurking in the water.

"I think jellyfish are cool. If you leave them alone, they are pretty beautiful creatures," Kyle Mackenzie said.

Last month in Maine, one of the purple jellyfish measuring a whopping five feet across was found on the shore on Peaks Island, something that a researcher said would have been all but impossible in the state until just a few years ago.

“Over the last couple of years, the lion’s mane jellyfish have been getting startlingly large – the largest ones I’d seen were maybe one or two feet across,” said biologist Nick Record of Bigelow Labs. “Two years ago, I started getting a lot of reports that they were maybe three feet across. Then last year there was one monster up in Lamoine, Maine, that was four or five feet across.”

A family took a photo of a massive, purple jellyfish washed up on an island in Maine over the weekend.

The size of this species, also known as the giant jellyfish, has varied over the years. Record said that researchers don't completely understand why.

So far, there's no advisory for any Massachusetts beach on Saturday. 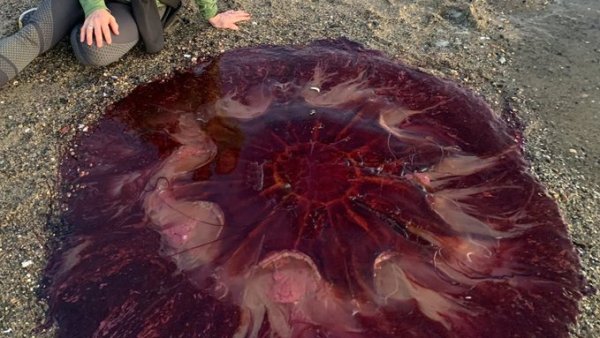