The Westport Police Department said in a statement Saturday that it would like to thank an off-duty St. Luke's Hospital nurse who stopped and attended to the injured people on scene.

Several people were transported to local hospitals after a multi-vehicle crash involving a dump truck Saturday morning in Westport, Massachusetts.

Westport police responded to the intersection of Route 88 and Hixbridge Road after receiving multiple 911 calls reporting a crash just before 11 a.m. Police say preliminary reports indicated several people had been injured and they were entrapped in their vehicles.

Upon arrival to the scene, officers saw a red Toyota Rav 4 in the southbound lane that was facing west with a shattered front windshield, a white Chevrolet Silverado lying on its passenger side off the road, and an International Dump Truck parked on Hixbridge Road.

Witnesses to the crash told officers that the Toyota Rav 4 was traveling south on Route 88 at the intersection of Hixbridge Road when the driver took a left hand turn into the northbound lane during a red traffic light.

The driver of the Silverado subsequently crashed into the Rav 4 and then collided with the dump truck, which had been stopped at a red light facing west, police said. As a result, the Silverado rolled onto its driver's side before coming to rest.

Immediately following the three-vehicle crash, an off-duty St. Luke's Hospital nurse stopped and attended to the injured people on scene, police said. The Westport Police Department said in a statement Saturday that it would like to thank the nurse, who left the scene prior to being identified by officers or paramedics, for assisting. 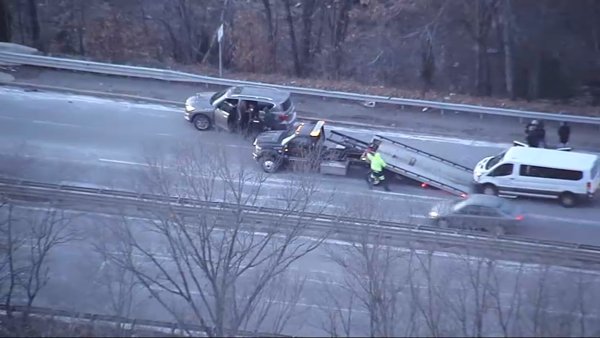 Multiple ambulances were called to the scene and all of the people involved in the accident were taken to either Charlton Memorial or St. Luke's Hospital with what appeared to be minor injuries.

The driver of the Rav 4 was cited for several motor vehicle violations following the crash, according to police.

Westport police are reminding the public of the increase in traffic headed to state and local beaches.

"We ask that you please take your time and drive carefully," police said in a statement.