A former Massachusetts mayor first elected at the age of 23 by touting himself as a successful entrepreneur was convicted Friday of stealing money from investors in his start-up to bankroll his lavish lifestyle and soliciting bribes from marijuana vendors who wanted to operate in the struggling mill city.

Jasiel Correia was found guilty by a jury after about 23 hours of deliberations over four days in a trial that highlighted his swift rise and fall in Fall River, where he had dazzled voters with his intelligence and promises to turn the city around.

He was found not guilty of three counts, including accusations that he forced his chief of staff to give him half of her salary in order to keep her city job.

Correia, who insisted he was innocent and attacked the charges as politically motivated, never took the stand. His lawyer had argued Correia wasn't a criminal, but merely an inexperienced businessman who believed that he was free to use investors' money as he deemed fit while he was producing the smartphone app.

Before Correia became mayor, prosecutors say he lured investors to support his app called "SnoOwl" by falsely claiming that he had previously sold another business for a big profit. Prosecutors say he used nearly two-thirds of the almost $400,000 he took from investors and spent it on things like fancy hotels, casinos, high-end restaurants and expensive gifts for his girlfriend.

Investors who took the stand told jurors they handed over their cash because they believed Correia was bright, trustworthy and headed for great things. One investor said he thought Correia was a “boy wonder” and that Correia assured him he wasn't going to “take a dime” out of the company so all the money could go to the development of the app.

Instead, prosecutors say Correia looted a bank account filled with investor money to pay for things like a helicopter tour of Newport, Rhode Island, a Mercedes, a $300 bottle of cologne and a $700 pair of Christian Louboutin shoes for his girlfriend. Records show he spent $27,000 on hotel expenses, $25,000 on dining expenses, and made charitable donations in his name, including $3,000 to the Fall River Children's Aquarium.

Fall River Mayor Jasiel Correia, who faces several federal charges following his two arrests within a year, announced Tuesday that he will “forgo” his campaign for re-election and take a “temporary absence.”

“These weren't occasional purchases, this is shameless continued stealing without any regard for the fact that he is betraying people who trusted him,” Assistant U.S. Attorney Zach Hafer told jurors.

Throughout the trial, prosecutors potrayed Correia as a serial liar, who they said misled voters in order to get elected just like they said he duped investors.
In a clip shown to jurors from a 2015 debate during the race for mayor, Correia promised taxpayers that he would “take your money and spend it wisely” -- because he said that's what he had done in his business. His lie about how he previously sold another app for big money allowed him avoid questions about how he could afford such a lavish lifestyle on his $17,000 annual salary as a Fall River city councilor, prosecutors said.

After he took office as mayor in 2016, prosecutors say Correia quickly turned to “old school pay-to-play political corruption,” by soliciting bribes from marijuana vendors seeking to operate in Fall River. Marijuana business owners, who were given immunity to testify against Correia, told jurors about how Correia or middlemen negotiated bribes in exchange for letters of approval from the city they need in order to get a license.

Correia's lawyer attacked the credibility and sought to shift the blame onto the government's witnesses who had cooperation agreements with prosecutors, suggesting they were lying in an effort to help themselves.

One man, who pleaded guilty in the extortion scheme, told jurors about how he collected an envelope filled with $25,000 in cash that a middleman had put in a shed behind his home. The witness, Hildegar Camara, said he opened the envelope in front of Correia and got spooked, telling the mayor, “If you take this or I take this, we're going to go to jail.”

Another man, who was hoping to operate a marijuana business in Fall River, described how Correia showed up at his family's store and asked for $250,000, saying he needed it for legal defense fees. After Correia and Charles Saliby eventually agreed on a lower bribe, Correia's chief of staff told Saliby: “You're family now,” according to Saliby's testimony.

Prosecutors had Saliby use fake money to show jurors how he says he stuffed $75,000 in cash in a metal box clipboard before handing it to Correia in the mayor's city-issued vehicle. 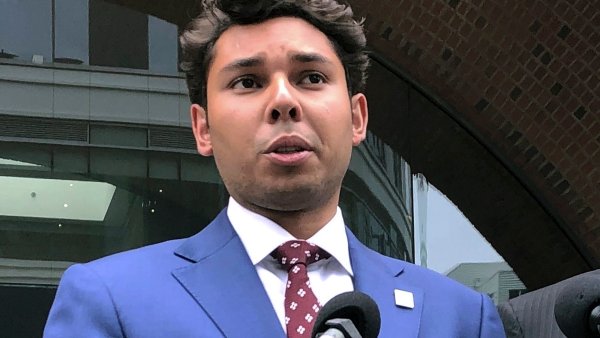