What to Know About COVID-19 Vaccine Distribution Across New England

State governments across New England are preparing to distribute coronavirus vaccines as cases of the deadly virus continue to spike in the region and beyond.

The U.S. Food and Drug Administration granted emergency use approval of Pfizer's Covid-19 vaccine on Friday after a key panel overwhelmingly endorsed the shots Thursday evening.

Massachusetts-based biotech firm Moderna has also applied for emergency use authorization of its vaccine.

Officials in New England say they hope to distribute vaccines widely, but through phased approaches that prioritize front-line workers and those in the greatest needs. They warn vaccines won't be available to the general populace right away.

Here's what to know about how the six New England states aim to distribute doses of the vaccine once shipments arrive:

Gov. Charlie Baker announced Wednesday the state's distribution will occur in three phases and is expected to start before the end of the month.

If the first phase goes according to plan, Baker said Phase 2 will start sometime in February. At that time, adults with two or more co-morbidities that create risks for COVID-19 complications would be first in line, followed by workers in fields such as transit, education, and grocery stores, then adults 65 years old and older and individuals with just one comorbidity.

The third and final phase is aimed to start in mid-April, when the vaccine would be available to everyone else in Massachusetts.

Vermont could receive its first doses of coronavirus vaccines by Dec. 15 and begin vaccinating high-priority residents a week after that, officials said Tuesday.

In a press conference, Health Director Dr. Mark Levine said the state has ordered 5,850 doses of coronavirus vaccines and expressed optimism the first shipments could arrive within a week.

One 74-year-old man is thankful he survived the coronavirus, largely thanks to the frontline workers at UVM Medical Center.

Health officials say "Phase 1A" of the state's vaccine distribution plan will focus on health care workers, particularly those who have patient contact in in-patient setting and those in high-risk settings.

Levine said an additional 5,850 doses were being held in reserve so people who get the shot in Phase 1A are able to get a second dose. Both Pfizer and Moderna's vaccines, which have yet to get FDA approval, are two-dose vaccines. He added the state would continue making vaccine orders on a weekly basis.

New Hampshire is expecting 12,000 doses in its first shipment of a coronavirus vaccine as early as next week, state officials said Thursday.

The state’s vaccination plan prioritizes health care workers, nursing home residents and first responders. Together, they add up to about 100,000 people, but the initial shipments are expected to include enough vaccines for 10,000 to 40,000 people, Sununu said last week.

The state is seeking volunteers to help with administering the vaccine, such as interpreters, helping with transportation, and security. Those interested can visit the website nhresponds.org.

Maine Governor Janet Mills called the vaccine's approval, "a beacon of hope during this challenging time."

"With this approval, we are now on the verge of initiating this monumental effort, the largest mass vaccination initiative in our state’s history," Mills said in a written statement on Friday.

Doses of the vaccine could arrive in Maine as early as next week. The state expects 12,675 doses in its first delivery, with similar deliveries in each of the following two weeks, the Portland Press Herald reported.

Front-line health care workers and residents of long-term care facilities most at risk will be among the first to receive doses of the vaccine, according to officials.

Shah has also said that Mainers who are not at greater risk and do not have underlying health conditions might not be vaccinated until the summer of 2021 or later, according to the paper.

Some Rhode Islanders could receive Pfizer’s COVID-19 vaccine as soon as next week, state officials said in a virtual news conference Thursday.

“It’s the beginning of the end of the pandemic,” said Dr. Philip Chan, consultant medical director with the state Department of Health’s Division of Preparedness, Response, Infectious Disease and Emergency Medical Services.

Gov. Gina Raimondo on Thursday announced Rhode Island will be extending the state's pause another week until Dec. 20.

Hospital workers, first responders, and staff and residents of longterm care facilities will be among the first to get the vaccine, officials said.

In phase two, teachers, school staff, child care workers, people in prisons and jails and older adults will be able to get the vaccine.

Young adults, children and employees working in critical industries will be able to get the vaccine in phase three. It won't be until phase four when the vaccine will be available to the general public, Chan said

Those doses, to be shipped directly from the Pfizer warehouse to hospitals with ultra-low temperature freezers, will likely be prioritized for the "highest-risk employees'' who deal with COVID-19 patients, "making sure those nurses and docs stay in the game," the Democratic governor said.

Cases of coronavirus in Connecticut continue to rise and the state's positivity rate is now up to 6.6%, but the first doses of a COVID-19 vaccine could soon be arriving to our state.

By Dec. 21, shipments of the vaccine are expected be transported to CVS and Walgreens distribution centers and then sent along to nursing homes throughout Connecticut, Lamont said.

The state is slated to receive nearly 32,000 doses in this first order from Pfizer, which is being split evenly between the hospitals and the nursing homes, with more orders to follow. Doses of the yet-to-be-approved Moderna vaccine are also expected to arrive in about a week. Josh Geballe, Lamont's chief operating officer, said roughly 240,000 health care workers and nursing home residents and staff should be fully vaccinated by the end of January, assuming 80% of people in those groups agree to get a shot.

From mid-January to May, about 1 million people in Phase 1b are expected to get vaccinated. That includes critical workers, people living in other congregate settings, people over age 65 and those under age 65 who are high risk. Everyone else is expected to begin getting vaccinated in June.

"You will see vaccine clinics in the coming weeks and months at places like our federally qualified health centers. Our local health departments will be conducting vaccination programs,'' Geballe said. In addition to Walgreens and CVS, other pharmacies are being authorized by state regulators to administer the vaccine, while the state's large health care systems are scaling up plans to vaccinate the general community after taking care of their own employees.

"You will see a very dramatic and large-scale ramp-up of administration sites across the state,'' he said.

As of Thursday, 163 of Connecticut's 169 cities and towns were listed in the red zone alert level, the highest of the state's four alert levels for COVID-19 infections. To date, there have been 5,327 COVID-associated deaths, an increase of 42 since Wednesday's figures. The number of hospitalizations decreased by 48 to 1,214. 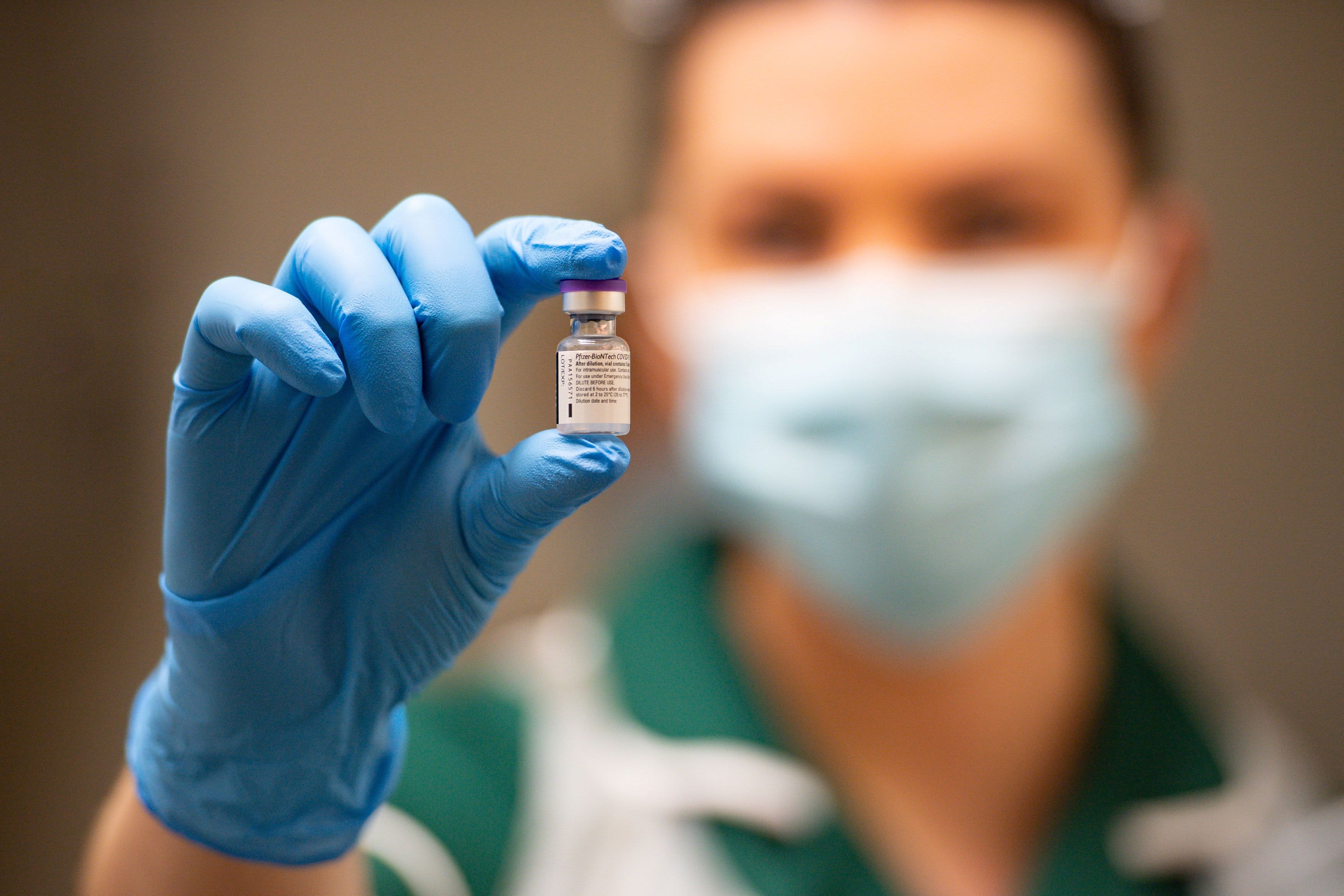 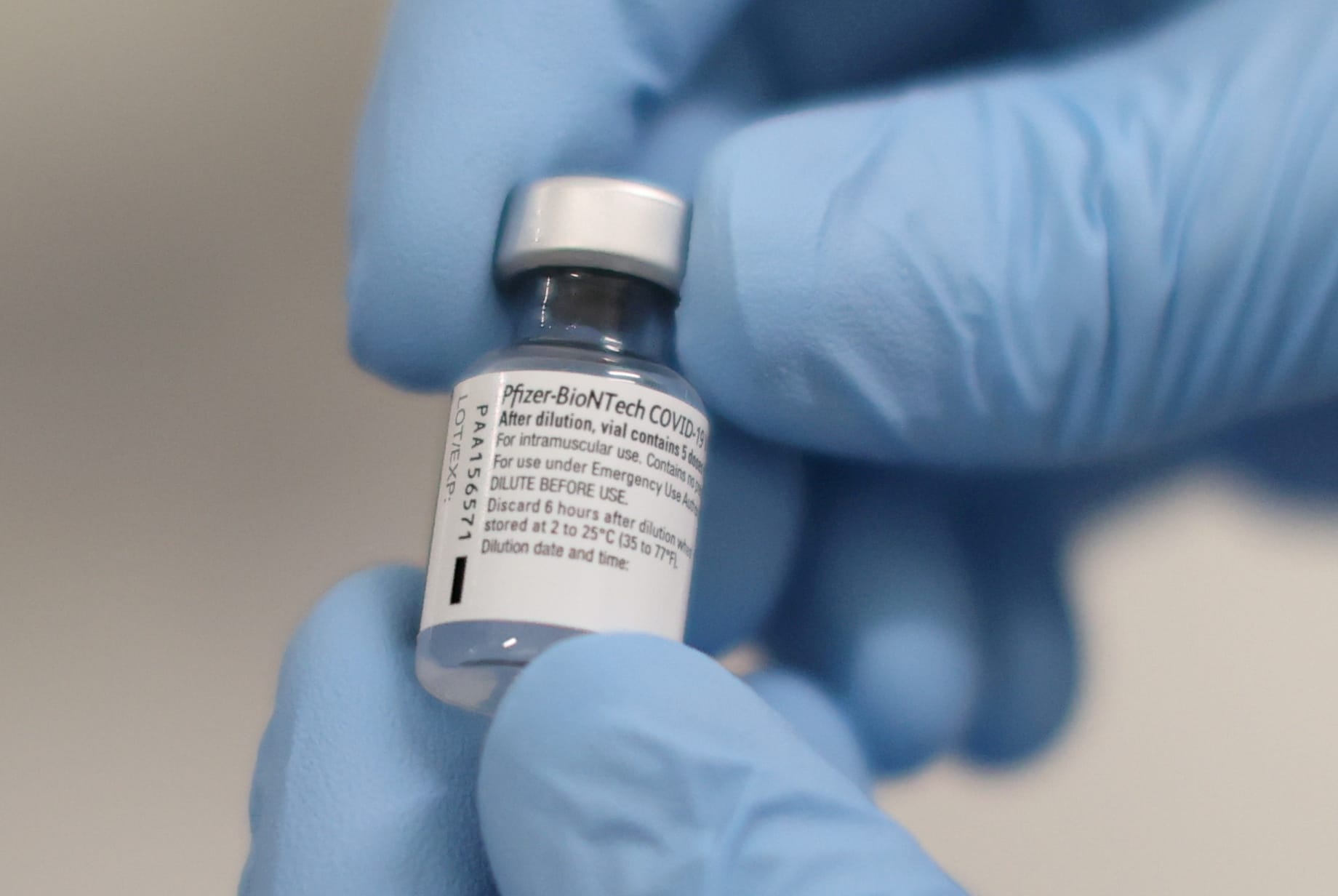