“It’s very, very dry and very parched where we are,” said Jay Limoge of Shelburne.

It’s even drier across most of New England.

With the drought conditions coinciding with Vermont’s treasured foliage season, NECN and NBC10 Boston told Commissioner Mike Snyder of the Vermont Department of Forests, Parks, and Recreation that some leaf-peepers have asked if the foliage will be impacted.

The commissioner was clear that, while trees absolutely need water to stay healthy, he considers them quite tough. Anecdotally, Snyder said he remembers dry years that have still seemed to feature bright and varied leaves.

Asked if the dry conditions could create a shorter foliage season, Snyder said, “That would have to be a real widespread occurrence at an extreme level, and I don’t know that we’re really there.”

Snyder added that fall storms involving high winds and heavy rain are more commonly thought of as threats to the length of the foliage season.

The commissioner pointed interested leaf-peepers to this state website for information about visiting Vermont during foliage season.

“Trees are adapted to dealing with a wide range of conditions,” Snyder said of how trees are enduring the dry conditions. “They have varying tolerances for drought. They manage to pull it off.”

The administration of Vermont Gov. Phil Scott has been careful to remind travelers from out of state that they do have to observe COVID-19-related safety guidance if planning a trip to the state during foliage season.

NIAID Director Dr. Anthony Fauci says as we do more indoor things in the Fall, we are likely to see an uptick in COVID-19.

At the famous Stowe Mountain Resort, where the gondola offers trips to the top of Mount Mansfield, several folks told NECN and NBC10 Boston Thursday that they were impressed by the views.

“I love the oranges and the reds that are starting to pop,” said leaf-peeper Kim Barney of Maryland.

“We got here a couple days ago and it wasn’t nearly as colorful as it is today,” said another foliage fan, Connecticut resident Lauren Bayless.

Jeff Wise, a Stowe Mountain Resort spokesman, said he’s encouraging visitors to not even try comparing this year’s natural fireworks show to other foliage seasons. He instead is urging them just to enjoy whatever sights come their way.

“When the leaves are turning and the colors are like this, I think it’s just as spectacular whether it’s been wet or dry,” Wise said. 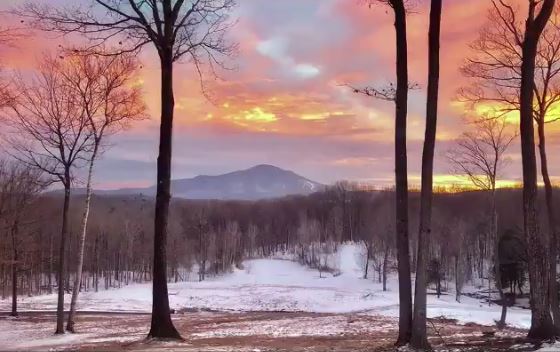 Fall Foliage and Sunsets: Top Instagram Photos of the Week