Nurses at St. Vincent Hospital in Worcester and the hospital's owner, Tenet Healthcare, will restart negotiations

Nurses and managers at Saint Vincent Hospital in Worcester, Massachusetts, returned to the negotiating table Monday.

Out on the picket line, nurses were wondering if the new talks would lead to a settlement.

Both sides were negotiating on Monday -- along with a federal mediator -- for the first time since nurses walked off the job in early March.

"It's just been very difficult for us to be here," said nurse Susan Troy. "We want to be in taking care of our patients."

Nurses at St. Vincent Hospital in Worcester are demanding an increase in staffing.

The main issue has been staffing levels. Nurses say they're often assigned five patients at a time.

"Four to one would be much more manageable," said nurse Kathy Duszak. "Especially when we have patients who are confused, climbing out of bed, risk for falling."

But talks broke down quickly.

"Their proposal was quite disrespectful and disappointing," said nurse Marlena Pellegrino, co-chair of the nurse bargaining unit.

The nurse's union said management came to the table without addressing the staffing issue, only offering to create a committee to review staffing ratios every quarter.

"It did not change any of the staffing levels or make any staffing improvements whatsoever," said Pellegrino. "We really don't need a committee to tell us that we have unsafe staffing, we've been working under it for the past over two years."

"After the session the nurses reviewed the hospital's proposal with the membership via zoom and the members voiced strong opposition to what was offered. The nurses responded that they have no interest in another committee. They need actual, safe and enforceable limits on nurses' patient assignments on the medical surgical floors, the addition of resource nurses and other staff on a variety of units to provide the care that reflects the level of illness of today's hospitalized patients," the Massachusetts Nurses Association said in a statement Monday night. "The strike will continue. Moving forward the union will be in contact with the mediator to see if they can find a path forward."

Management, which has brought in hundreds of replacement nurses, has said their staffing levels are in line with other medical centers.

"After we presented our proposal, the MNA bargaining committee spent about 60 minutes reviewing it, told us that they had no questions and that they would share it with their members," a spokesperson for the hospital said in a statement. "They then ended the session without making a counterproposal, and without suggesting a time for a follow-up session. The MNA bargaining committee has now fully proven they don’t care about facts and won't negotiate. Their words are hurtful and disrespectful. The MNA dismissed our proposal without even the courtesy of a discussion or feedback, and issued a press release that focuses on continuing the strike rather than preparing for continued discussions at the table."

More on the Nursing Strike 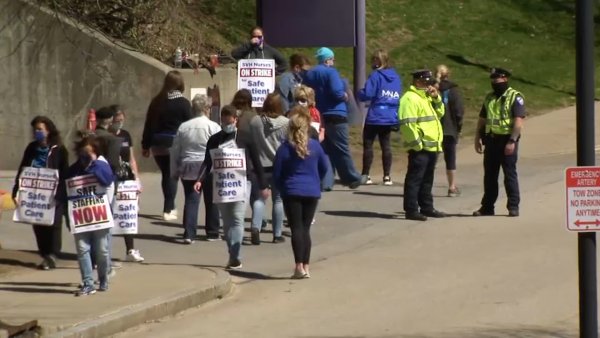 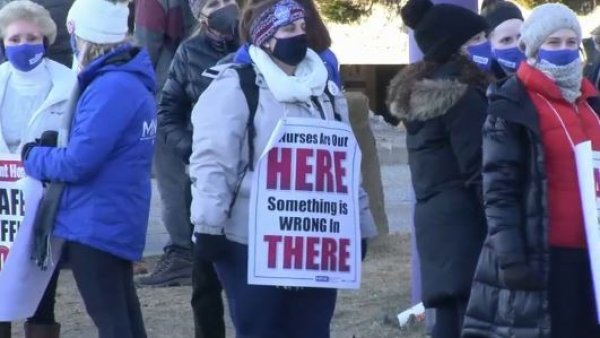 Hundreds of Nurses Strike at St. Vincent Hospital in Worcester

"We don't have a second to spend an extra minute with that patient who's afraid to go to surgery, the 85-year-old that fell and broke her hip and she doesn't know how she's going to make out," Bellows said.

No new talks have been scheduled.

About 730 nurses are on strike, and about 110 have crossed the picket line.