Lawyers for Donald Trump stretched beyond the facts Tuesday when they argued there's an open-and-shut case that the Constitution bars impeaching former presidents. That question is not settled, though the weight of legal views contradicts the Trump team's assertions.

Bruce Castor and David Schoen addressed the Senate on the first day of Trump's trial after Democratic impeachment managers from the House presented the opening of their case for conviction. Trump is accused of inciting the deadly siege on the U.S. Capitol on Jan. 6.

Democrats overcame a procedural hurdle as the Senate voted 56-44 to proceed with trial but face tough odds trying to win the two-thirds majority needed to convict Trump. 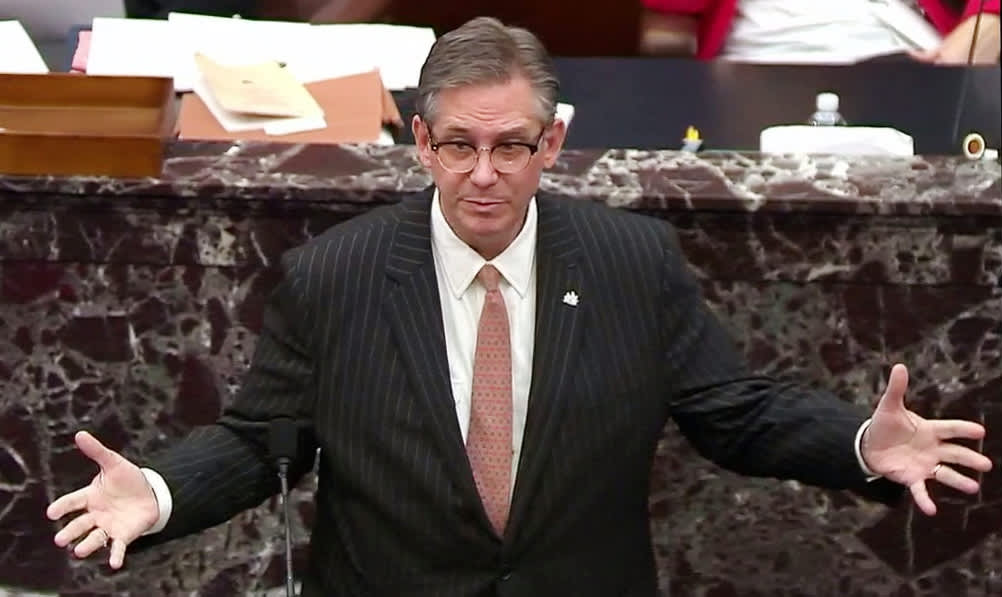 A look at the arguments:

CASTOR, quoting the Constitution: "'Judgment in cases of impeachment’ — i.e., what we are doing — ‘shall not extend further than to removal from office.’ What is so hard about that? Which of those words are unclear? ... President Trump is no longer in office. The object of the Constitution has been achieved. He was removed by the voters.”

THE FACTS: Castor ignored the Constitution's full passage on this matter in the conclusion of his opening remarks. The Constitution goes on to provide another legitimate consequence of impeachment: “Disqualification to hold and enjoy any Office of honor, Trust or Profit under the United States.”

Democrats argue that the purpose of impeaching an ex-president, who can no longer be removed from office because he has left it, is to hold him accountable for the insurrection and to seek to bar him from holding future office.

Castor gave the fuller flavor of the passage earlier in his remarks but ignored the matter of future disqualification in summing up his argument.

Former President Donald Trump’s attorney, Bruce Castor, said arguing that Trump violated the 14th Amendment and incited an insurrection is “ridiculous.” “It doesn’t take a Constitutional scholar to recognize that [the 14th Amendment] is written for people who fought for the Confederacy… and it doesn’t take a Constitutional scholar to require that they be convicted first in a court with due process of law,” Castor said.

SCHOEN, on trying an ex-president on an impeachment charge: “You bought into a radical constitutional theory. ... This is an affront to the Constitution.”

THE FACTS: While Trump is indeed the first president to be tried after leaving office, making it new legal territory, it's not a “radical” concept in legal circles.

Nothing in the Constitution explicitly bars an impeachment trial for an official no longer in office, and there is precedent for doing so with the 1876 impeachment trial of Secretary of War William W. Belknap, who was tried and acquitted even after he had resigned his office.

Belknap resigned before he was impeached, but the Senate still asserted its right to hold a trial, though it ultimately failed to convict him on a two-thirds vote. In contrast, Trump was impeached while still in office; only his Senate trial came after.

The U.S. government’s Congressional Research Service, in a Jan. 15 report, said: “Though the text is open to debate, it appears that most scholars who have closely examined the question have concluded that Congress has authority to extend the impeachment process to officials who are no longer in office."

The Constitution doesn’t mention convicting an ex-president. It only says the president and other officers shall be removed from office on impeachment for, and conviction of, treason, bribery or “high crimes and misdemeanors.”

Charles J. Cooper, a prominent conservative constitutional scholar, said in a Wall Street Journal op-ed that “it defies logic to suggest that the Senate is prohibited from trying and convicting former officeholders.”

Harvard Law professor Laurence H. Tribe and others also have written that the Constitution clearly envisioned trying ex-presidents in a Senate impeachment trial. “Concluding otherwise would all but erase the disqualification power from the Constitution’s text," he wrote in The Washington Post.

If Democrats summon enough votes to convict Trump — 67 — the ex-president could then be barred from future office with a simple majority of 51 votes in the Senate.

CASTOR, referring to the constitutional standard of “high crimes and misdemeanors” for impeaching a president: “A high crime is a felony and a misdemeanor is a misdemeanor. The words haven’t changed that much over time.”

THE FACTS: That’s not right. A misdemeanor referred to by the Constitution does not resemble a mere infraction that falls short of a felony, as misdemeanors and felonies are understood in the justice system today.

Constitutional scholars say the “high crimes and misdemeanors” catch-all was intended by the framers to make clear that impeachment could be aimed at any consequential abuse of power so long as that abuse hurt the country at large.

And they say the standard was “high” misdemeanors as well as high crimes, with the founders seeing no need to repeat the adjective.

The term is considered open-ended because, like other constitutional provisions, it was intended to last long beyond the lives of the designers of the Constitution, Georgia State University law professor Neil Kinkopf wrote on the bipartisan National Constitution Center’s website.

Bruce Castor, an attorney representing Donald Trump in the Senate impeachment trial, opened for the defense by condemning those who participated in the Capitol Riot.

EDITOR’S NOTE — A look at the veracity of claims by political figures.