Messages seeking comment were left with lawyers representing the officers. A message was also left for the man who was pushed to the ground, longtime activist Martin Gugino.

The entire Emergency Response Team in Buffalo, N.Y., resigned in protest after New York Gov. Andrew Cuomo condemned Buffalo police for pushing and injuring an elderly protester, saying, “It's just fundamentally offensive and frightening.” The protester, 75-year-old Martin Gugino, was taken to the hospital on Thursday evening after sustaining a head wound and possible concussion.

John Evans, president of the Buffalo Police Benevolent Association, told The Buffalo News: “Obviously, we are ecstatic with their decision. These officers have been put through hell and I look forward to seeing them back on the job.”

Flynn, echoing earlier statements, said he didn't necessarily feel that altercation rose to the level of a felony but that state law required prosecutors to bring such a charge when a victim is at least 65 and the suspected perpetrators are at least 10 years younger.

Addressing criticism that he slow-played or “sandbagged” the case, Flynn said prosecutors made a thorough presentation to the grand jury but, citing secrecy rules, said he couldn’t discuss what witnesses were called or what evidence was presented. The grand jury heard the case on a delayed basis because of coronavirus-related court closures, he said.

Flynn said throughout the investigation, video of the shove remained the primary evidence.

In 2006, Cariol Horne, a police officer from Buffalo, N.Y., intervened when a fellow police officer put a handcuffed suspect in a chokehold. Later, she was fired from her job and lost her pension. Today, she’s fighting for a law that will require other police officers to hold their fellow cops accountable for misconduct.

A news crew covering protests in downtown Buffalo last June over Floyd's death in Minneapolis captured video of the officers shoving Gugino to the ground in front of city hall as crowd control officers in riot gear cleared demonstrators from the area for an 8 p.m. curfew.

Gugino, pushed backward, started bleeding after hitting his head on the pavement and spent about a month in the hospital with a fractured skull and brain injury.

McCabe and Torgalski were suspended without pay and arrested within days. They pleaded not guilty and were released without bail pending further developments. Flynn said at a news conference Thursday that national attention on the case had no influence on his decision to charge the officers right away. 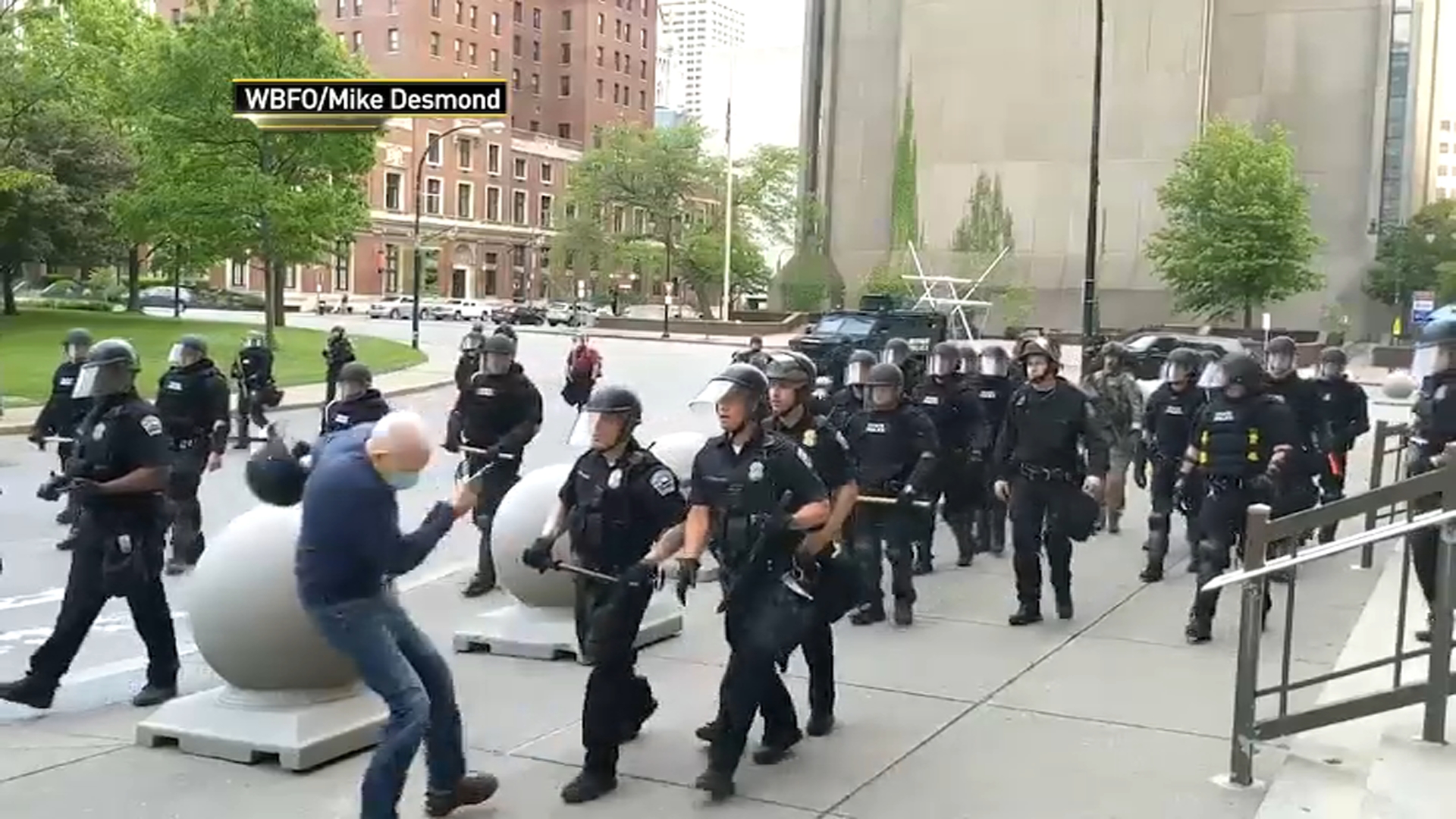 NY Protester Knocked to Ground by Police Is Out of Hospital, Lawyer Says

“All I need is probable cause for an arrest,” Flynn said. “When I go to trial, though, I need beyond a reasonable doubt. At this point right now, it's 50/50 in my mind as to whether or not it was intentional or reckless. If it's 50/50, that's not beyond a reasonable doubt. That analysis factors into my mind, but I can't articulate to you what was going on in (grand jurors') minds.”

The Buffalo News reported that the Buffalo Police Department will begin an internal affairs investigation, a development that had been on hold because of the criminal case. A message seeking comment was left with a police spokesperson.

In the wake of the officers' suspensions, nearly 60 other members of the department's crowd control unit said they would no longer serve on the unit, effectively shutting it down.

The city responded by replacing the Emergency Response Team with a Public Protection Unit designed to work with groups seeking to peacefully protest. Other reforms in the wake of the protests included halting arrests for low-level, non-violent offenses like marijuana possession and making it easier for the public to view police body camera video.