The results of an investigation into the fatal arrest of Elijah McClain in suburban Denver released Monday criticizes how police handled the entire incident, faulting officers for their quick, aggressive treatment of the 23-year-old Black man and the department for having a weak accountability system that failed to press for the truth about what happened.

The investigation commissioned by the city of Aurora found “two contrasting stories” of what happened to McClain in August 2019 after someone reported him as suspicious. One, based on officers’ statements to investigators, where police describe a violent, relentless struggle. And another based on body camera footage in which McClain can be heard crying out in pain, apologizing, explaining himself, and pleading with the officers as they restrained him, applied “pain compliance” techniques, and sat or kneeled on him.

“Forgive me ... you all are phenomenal, you are beautiful,” McClain said at one point, the report said.

Police also put McClain in a neckhold that stops the flood of blood to the brain, rendering him temporarily unconscious, and paramedics injected him with 500 milligrams of ketamine as a sedative. He suffered cardiac arrest and later was taken off life support.

The report also suggests that District Attorney Dave Young’s review of the case failed to assess the officer’s conduct and “did not reflect the rigor” of a police investigation “that one would expect” when assessing whether a crime was committed. 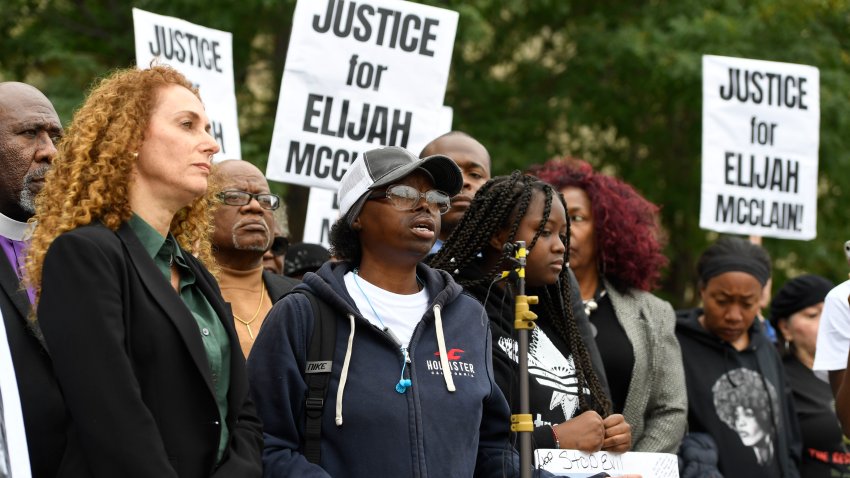 Young's review of the case did not find sufficient evidence to press criminal charges in McClain's death.

The district attorney didn't consider Colorado's statutory requirement that officers must have “reasonable suspicion” of a previous or impending crime in order to stop someone, relying only on the fact that McClain was in a “high crime area” and that he was wearing a ski mask and a coat on a summer night, the report found.

"Neither the neighborhood nor the ski mask by themselves or together are sufficient to create reasonable suspicion without more,” the report states.

His family said McClain wore the mask because he had a blood condition that caused him to get cold easily.

His death drew renewed attention last year amid the national reckoning over police brutality and racial injustice and prompted several investigations, including a probe into possible criminal charges by the Colorado Attorney General’s Office that remains in progress.

The investigation found there was no attempt to examine McClain before paramedics administered ketamine. The report suggested policy should be changed so paramedics prioritize patient safety rather than act as an “arm” of the police department.

It also recommended the police department review how officers are trained to decide whether they have a legal reason to stop, frisk and arrest people, and urges the city to consider overhauling how it reviews incidents. It said department investigators who questioned the three officers who stopped and arrested McClain “failed to ask basic, critical questions” needed by any prosecutor to determine if their use of force was legally justified.

Lawyers representing McClain’s parents in a lawsuit against Aurora said the investigation’s findings backed up their claims that he should never have been stopped, subjected to force and injected with ketamine.

Lawyers for mother Sheneen McClain she was grateful the report “laid bare” the wrongdoing of city employees.

“Elijah committed no crime on the day of his death, but those who are responsible for Elijah’s death certainly did,” they said in a statement.

Following a presentation of the investigation's findings to city councilors, about a half dozen people who signed up to speak in the subsequent online council meeting Monday evening demanded justice for McClain. Most called for firing or prosecuting the three officers who stopped McClain along with the firefighter who approved the use of ketamine and the paramedic who administered it.

In January, Colorado Attorney General Phil Weiser announced he opened a grand jury investigation into McClain’s death as part of his investigation, saying it provided an “investigative tool” to compel testimony and require the production of documents. Weiser’s office is also conducting a civil rights investigation into Aurora police, its first one under a police reform law passed after George Floyd’s death in Minneapolis set off protests.

Last year, the U.S. Department of Justice and FBI also announced they had been reviewing McClain’s case for a potential federal civil rights investigation since 2019.

An autopsy could not determine how McClain died, which the local prosecutor said was a key reason he declined to charge any of the three police officers who arrested McClain. The lawsuit filed by McClain’s family alleges he died as a result of a dramatic increase of lactic acid in his blood caused by excessive force used by police over about 18 minutes combined with the ketamine suppressing his respiratory system. They claim that police continued to “torture” McClain even after he was restrained, treatment they say is a result of the department’s history of “unconstitutional racist brutality.”