Egypt is expecting more than $1 billion in compensation after a cargo ship blocked the Suez Canal for nearly a week, according to the top canal official. He also warned the ship and its cargo will not be allowed leave Egypt if the issue of damages goes to court.

Lt. Gen. Ossama Rabei, head of the canal authority, said in a phone interview with a pro-government TV talk show on Wednesday that the amount takes into account the salvage operation, costs of stalled traffic, and lost transit fees for the week that the Ever Given had blocked the Suez Canal.

“It’s the country’s right,” Rabei said, without specifying who would be responsible for paying the compensation. He added that in the past, canal authorities and the ship's owners have had a good relationship.

White House press secretary Jen Psaki told reporters on Friday that the U.S. has reached out to Egyptian leadership to offer help in reopening the Suez Canal, which has been blocked since Tuesday by a grounded 200,000 ton container ship.

The massive cargo ship is currently in one of the canal's holding lakes, where authorities and the ship's managers say an investigation is ongoing.

On Thursday, the ship's technical managers, Bernard Schulte Shipmanagement, said in an email to The Associated Press that the ship's crew was cooperating with authorities in their investigation into what led to the vessel running aground. They said that Suez Canal Authority investigators have been given access to the Voyage Data Recorder, also known as a vessel's black box.

Rabie also said that if an investigation went smoothly and the compensation amount was agreed on, then the ship could travel on without problems.

However, if the issue of compensation involved litigation, then the Ever Given and its some $3.5 billion worth of cargo would not be allowed to leave Egypt, he told the show’s host.

More on the Ship Stuck in the Suez: 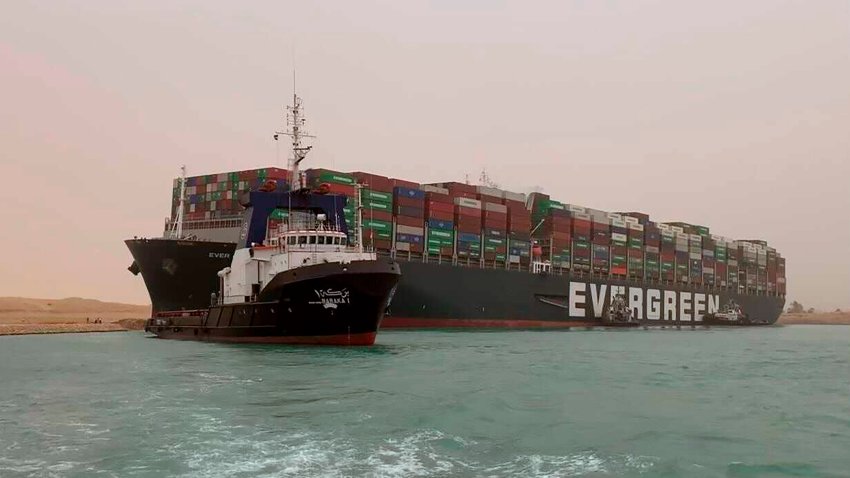 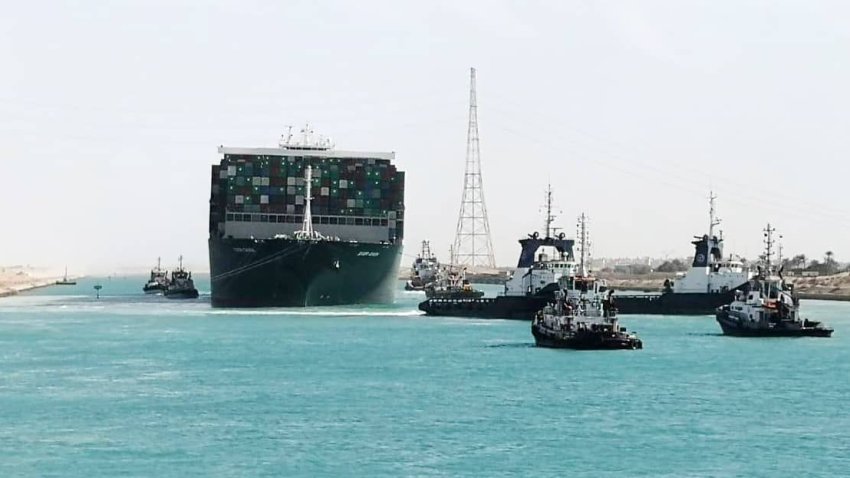 Litigation could be complex, since the vessel is owned by a Japanese firm, operated by a Taiwanese shipper, and flagged in Panama.

Bernhard Schulte has said previously that two Egyptian canal pilots were aboard when the ship got stuck. Such an arrangement is customary to guide vessels through the narrow waterway, but the ship’s captain retains ultimate authority, according to experts.

On Monday, a flotilla of tugboats helped by the tides, wrenched the Ever Given's bulbous bow from the canal’s sandy bank, where it had been firmly lodged. The tugs then guided the Ever Given through the water after days of unsuccessful attempts to dislodge the colossus that had captivated the world, drawing scrutiny and social media ridicule.

A giant container ship remains stuck sideways in Egypt's Suez Canal. Authorities are racing to free the vessel and reopen traffic in the crucial East-West waterway for global shipping.

The Ever Given had crashed into a bank of a single-lane stretch of the canal about 6 kilometers (3.7 miles) north of the southern entrance, near the city of Suez. That forced some ships to take the long, alternate route around the Cape of Good Hope at Africa’s southern tip — a 5,000-kilometer (3,100-mile) detour that costs ships hundreds of thousands of dollars in fuel and other costs. Others waited in place for the blockage to be over.

The unprecedented shutdown, which raised fears of extended delays, goods shortages and rising costs for consumers, added to strain on the shipping industry, already under pressure from the coronavirus pandemic.