Even though he was found guilty of three counts, under Minnesota statutes he'll only be sentenced on the most serious one

Derek Chauvin is already locked away in Minnesota's only maximum-security prison, held in a single cell for his own safety. But it will be two months before the former Minneapolis police officer learns his sentence for George Floyd’s death.

Chauvin, 45, was convicted Tuesday of second-degree unintentional murder, third-degree murder and second-degree manslaughter for pressing his knee against Floyd's neck for 9 1/2 minutes as the Black man said he couldn't breathe.

Even though he was found guilty of three counts, under Minnesota statutes he'll only be sentenced on the most serious one — second-degree murder. While that count carries a maximum sentence of 40 years, experts say he won't get that much. They say that for all practical purposes, the maximum he would face is 30 years, and he could get less.

Before the verdict was read in the Derek Chauvin trial, Floyd family attorney Justin Miller spoke about the emotional trauma the family was still dealing with. You can get fairness with a verdict, "but it's not justice, because a person died, they lost their life and we can never get them back," Miller said.

WHY WON'T WE SEE MULTIPLE SENTENCES?

Because all the charges stem from one act, carried out against one person. Multiple sentences are typically handed down in cases when there are convictions for multiple victims, or multiple crimes against one victim.

For example, if a defendant is convicted of kidnapping and sexually assaulting a woman — two crimes against one victim — a judge would issue a sentence on each count, and could rule that they be served at the same time or consecutively, said former Hennepin County chief public defender Mary Moriarty.

That's not the case here, Moriarty said. “This case involved three different theories of the same behavior toward the same person.”

Minnesota Attorney General Keith Ellison spoke on Tuesday after Derek Chauvin was found guilty on three counts in the death of George Floyd.

IS THERE ANOTHER EXAMPLE OF THIS?

If Noor's murder charge is tossed out on appeal, which is pending, he would then be sentenced on that lesser count. Likewise, if Chauvin's second-degree murder count is ultimately dismissed, he would be brought back to court for resentencing on the top remaining charge. 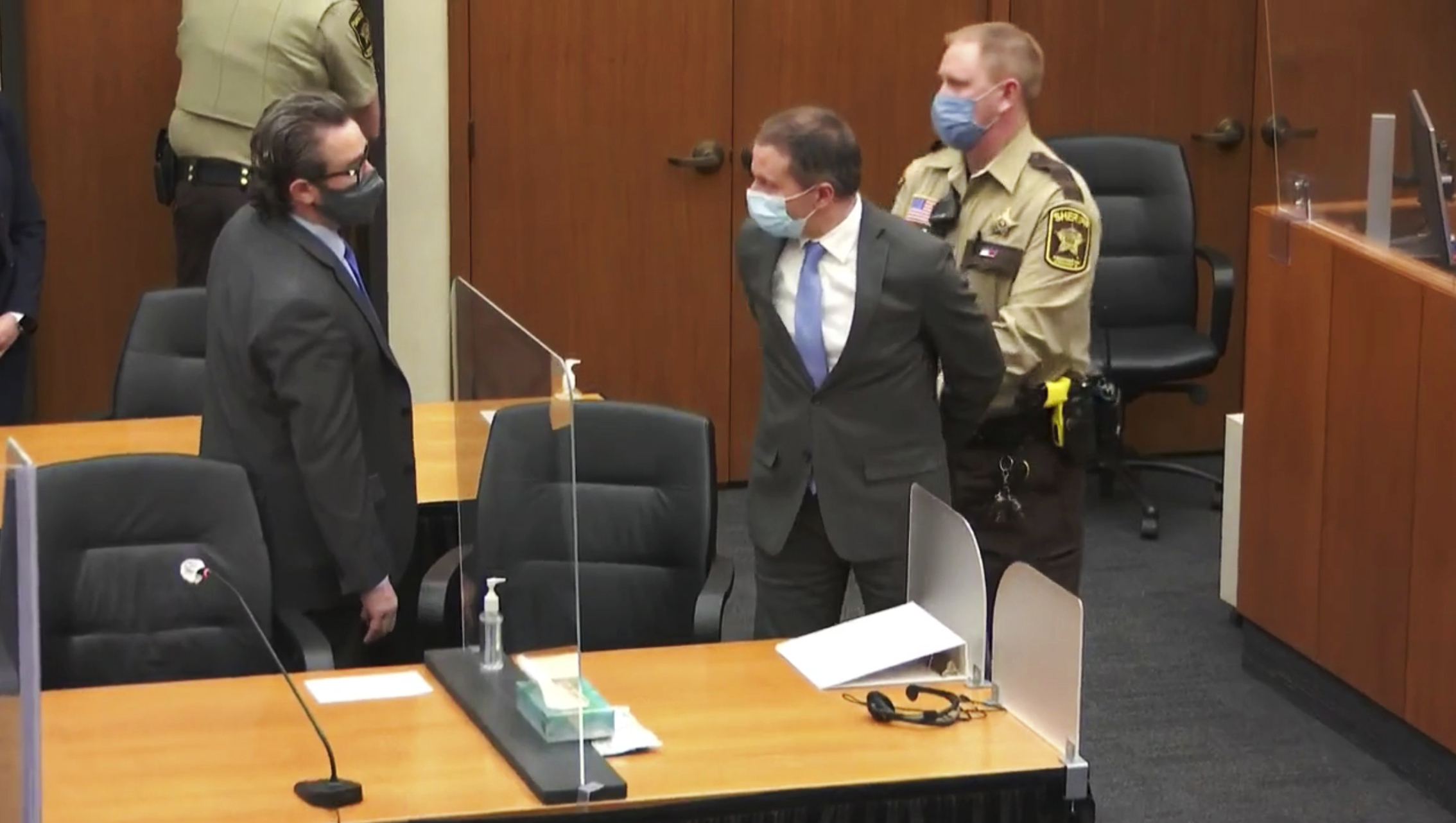 ‘He Was Guilty': Alternate Juror Says She Agrees With Chauvin Conviction WHY IS IT UNLIKELY CHAUVIN WILL GET THE 40-YEAR MAX?

Minnesota has sentencing guidelines that were created to establish rational, consistent sentences and ensure sentences are neutral without considering factors such as race or gender. The guidelines say that even though they are advisory, presumptive sentences “are deemed appropriate” and judges should only depart from them when “substantial and compelling circumstances can be identified and articulated.”

For second-degree unintentional murder, guidelines say the presumptive sentence for someone with no criminal record like Chauvin would be 12 1/2 years. Judges can sentence someone to as little as 10 years and eight months or as much as 15 years and still be within the advisory guideline range.

But in this case, prosecutors are seeking a sentence that goes above the guideline range, called an “upward departure.” They cited several aggravating factors, including that Floyd was particularly vulnerable, that Chauvin was a uniformed officer acting in a position of authority, and that his crime was witnessed by multiple children — including a 9-year-old girl who testified that watching the restraint made her “sad and kind of mad.”

After the verdicts, Attorney General Keith Ellison said: “We believe there are aggravating factors and the sentence should exceed the sentencing guidelines.”

After Derek Chauvin was found guilty on all counts for the death of George Floyd, the sentencing phase of his trial begins. Lakai Vinson, a criminal defense attorney, told NBCLX what to expect next.

Experts say the max will be 30 years — double the high end of the guideline range. If Judge Peter Cahill were to sentence Chauvin to anything above that, he risks having his decision reversed on appeal.

Mark Osler, a professor at University of St. Thomas School of Law, said the Minnesota Supreme Court set a standard maximum for upward departures in the 1981 State v. Evans case, finding that generally, when an upward departure is justified, “the upper limit will be double the presumptive sentence length."

The court stressed that doubling the guideline range is only an upper limit and shouldn't be automatic. The justices also left room for the rare case in which a judge would be justified in going even higher. Mitchell Hamline law professor Ted Sampsell-Jones said last year's State v. Barthman opinion reaffirmed the Evans rule and “sent a signal” that sentences exceeding a doubling of guidelines “should be in fact extremely rare” and almost never happen.

WHAT GOES INTO THE PROCESS?

If he decides aggravating factors exist, he has to keep them in proportion to the crime.

“It's going to be a really difficult decision for Judge Cahill," Osler said.

No matter what sentence Chauvin gets, in Minnesota it's presumed that a defendant with good behavior will serve two-thirds of the penalty in prison and the rest on supervised release, commonly known as parole.

That means if Chauvin is sentenced to 30 years, he would likely serve 20 behind bars, as long as he causes no problems in prison. Once on supervised release, he could be sent back to prison if he violates conditions of his parole.

Both sides are writing legal briefs on aggravating factors, which Cahill will review before determining whether they exist.

Cahill also ordered a pre-sentence investigation report, which is usually nonpublic. This report is typically prepared by a probation officer and includes highly personal information such as family history and mental health issues. It also includes details of the offense and the harm it caused others and the community.

Cahill said he'll issue a sentence in two months. A date for sentencing has not been set.

Members of the Congressional Black Caucus gathered to watch the verdict in the trial of former Minneapolis police officer Derek Chauvin being read.

WILL WE HEAR FROM CHAUVIN?

That's hard to say. He has the right to make a statement during his sentencing hearing, but Moriarty said that can be tricky. While judges want people to take responsibility and be remorseful — and can take that into consideration in sentencing — a defendant also wouldn't want to say anything that could jeopardize a possible appeal.

“That’s the hard part because I think everybody, including family, wants to hear him say something about how he is sorry,” she said.