The white gunman accused of committing a racist massacre at a Buffalo supermarket planned to continue his bloody rampage down the street before he was stopped, police said Monday.

Authorities said he shot, in total, 11 Black people and two white people. The shooter livestreamed the attack on Twitch, prompting scrutiny of how fast social platforms react to violent videos.

Investigators pouring through the gunman's history and evidence obtained at the scene as well as the 18-year-old's house say he wanted to keep targeting Black Buffalo residents after the supermarket attack.

“It appeared that his plans were to drive out of here and continue driving down Jefferson Avenue looking to shoot more Black people as he could and possibly go to another store location,” Buffalo Police Commissioner Joseph Gramaglia said on ABC’s “Good Morning America." 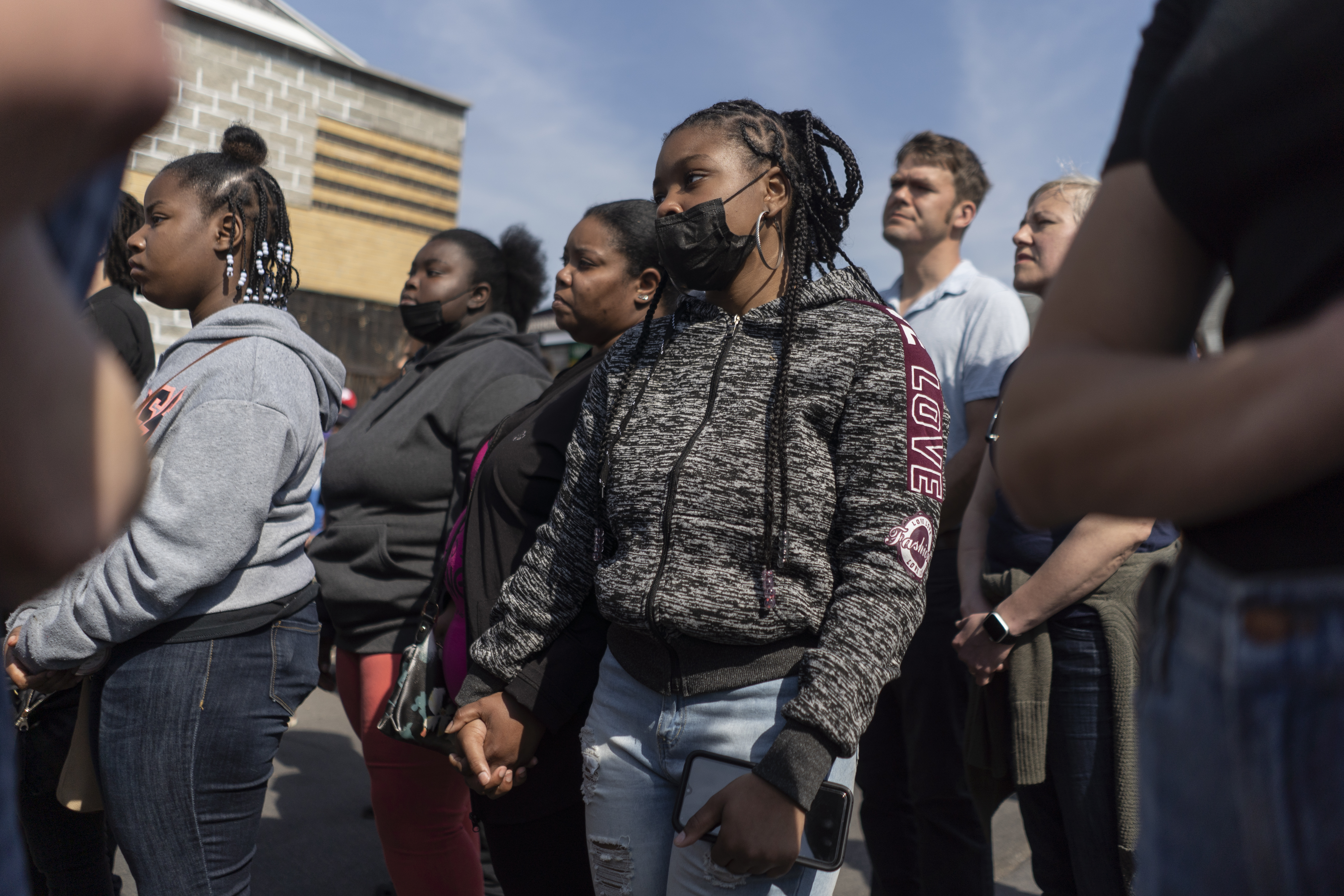 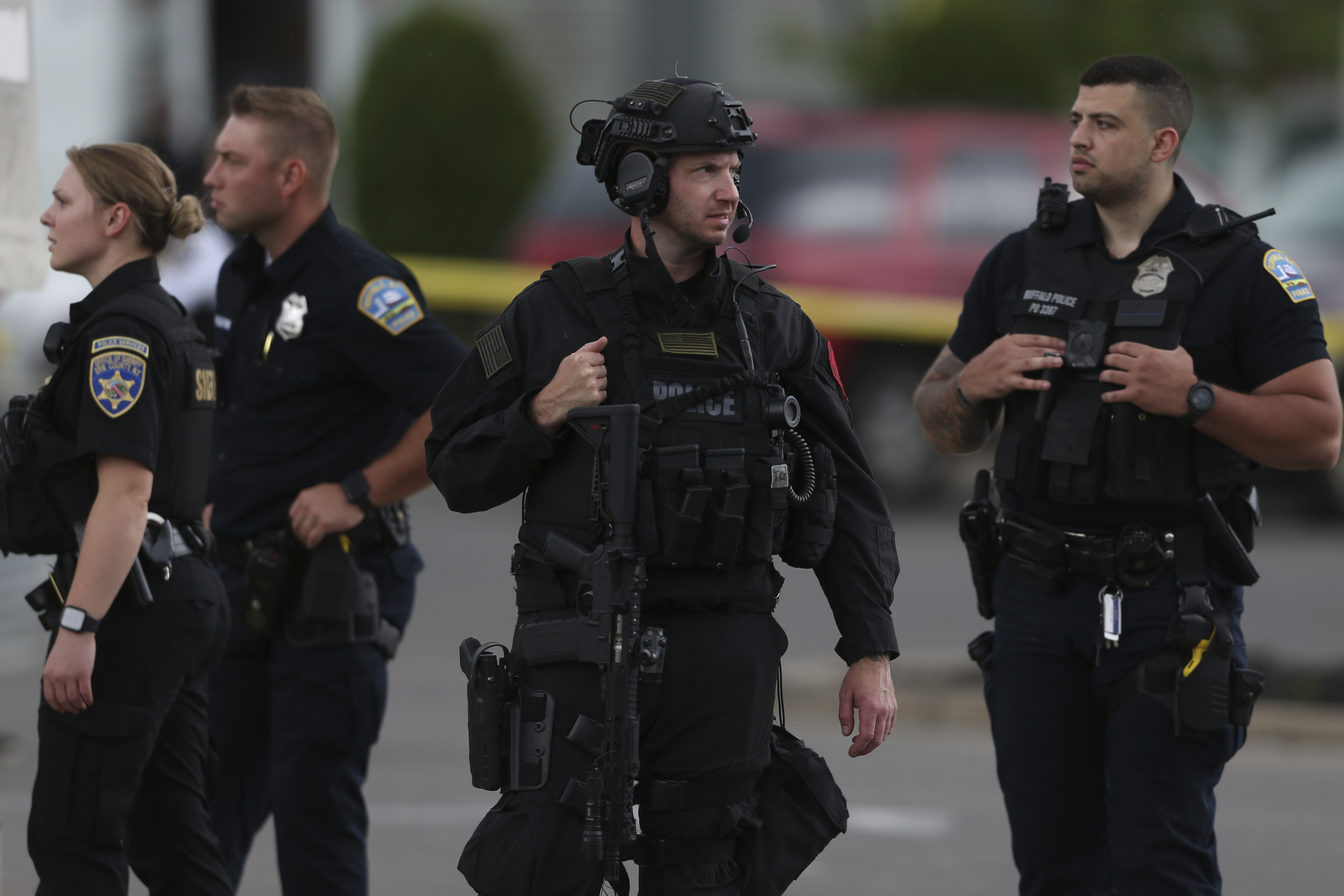 Authorities said they were investigating the attack on predominantly Black shoppers and workers at the Tops Friendly Market as a potential federal hate crime or act of domestic terrorism. Saturday's mass violence in Buffalo was the deadliest of a wave of fatal weekend shootings, including at a California church and a Texas flea market.

Federal authorities were still working to confirm the authenticity of a racist 180-page document, purportedly written by the 18-year-old, that said the assault was intended to terrorize all nonwhite, non-Christian people and get them to leave the country.

The gunman wrote as far back as November about staging a livestreamed attack on African Americans, practiced shooting from his car and traveled hours from his home in March to scout out the store, according to detailed diary entries he appears to have posted online.

The author of the diary posted hand-drawn maps of the grocery store along with tallies of the number of Black people he counted there, and recounted how a Black security guard at the supermarket confronted him that day to ask what he was up to. He gave an excuse about collecting data and soon left — “a close call,” he wrote.

A Black security guard was among the dead in Saturday's shooting rampage. At the White House, President Joe Biden, who planned a visit Tuesday to Buffalo, paid tribute to slain security guard Aaron Salter. The retired police officer fired repeatedly at the attacker, striking his armor-plated vest at least once before being shot and killed. Biden said Salter “gave his life trying to save others."

The latest information on the mass shooting in Buffalo and a vigil held in NYC tonight for the victims of the tragic shooting. Chris Jose, Jessica Cunnington, and Checkey Beckford report.

A transcript of the diary entries was apparently posted publicly sometime ahead of the attack. It was not clear how many people might have seen the entries. Experts said it was possible but unlikely the diary could have been altered by someone other than the author.

In an April 17 post apparently by the alleged shooter, he exhorted readers to kill agents from the FBI and Bureau of Alcohol, Tobacco, Firearms and Explosives.

The diary was taken from the chat platform Discord, while portions of a Twitch video circulating online showed the gunman killing multiple shoppers in less than a minute. At one point, he trains his weapon on a white person cowering behind a checkout counter, but says “Sorry!” and doesn’t shoot. Screenshots purporting to be from the broadcast appear to show a racial slur targeting Black people scrawled on his rifle.

The gunman surrendered inside the supermarket and was arraigned on a murder charge over the weekend. He pleaded not guilty and was jailed under a suicide watch. Federal authorities are contemplating bringing hate crime charges.

"I want to be clear, for my part, from everything we know, this was a targeted attack, a hate crime, and an act of racially motivated violent extremism," said FBI Director Christopher Wray. "Where there remain a lot of unknowns as there always do in an investigation at this stage, what is absolutely certain is that we at the FBI are committed to comprehensively and aggressively investigating Saturday's attack."

No one answered the door at his family’s home Monday.

The gunman made threatening comments that brought police to his high school last spring, but he was never charged with a crime and had no further contact with law enforcement after his release from a hospital, officials said.

The revelation raised questions about whether his encounter with police and the mental health system was yet another missed opportunity to put a potential mass shooter under closer law enforcement scrutiny, get him help, or make sure he didn’t have access to deadly firearms.

Law enforcement officials revealed Sunday that New York State Police troopers had been called to his high school last June for a report that the then-17-year-old had made threatening statements.

A gunman's hate-filled deadly rampage at a Buffalo supermarket claimed the lives of 10 people, including a deacon and a security guard. NBC New York's Myles Miller reports.

The gunman had threatened to carry out a shooting at Susquehanna Valley High School in Conklin around graduation, a law enforcement official who spoke on condition of anonymity said. The official was not authorized to speak publicly on the investigation.

Buffalo Police Commissioner Joseph Gramaglia said the 18-year-old had no further contact with law enforcement after a mental health evaluation that put him in a hospital for a day and a half.

“Nobody called in,” he said. “Nobody called any complaints,” Gramaglia said. The threat was “general" in nature, he said, and not related to race.

New York is one of several states that have enacted “red flag” laws in recent years that were intended to try and prevent mass shootings committed by people who show signs that they might be a threat to themselves or others.

Those laws allow law enforcement officers, a person's family, or in some cases, medical professionals or school officials to petition courts to temporarily seize the person's firearms, or prevent them from buying guns.

Federal law bars people from owning guns if a judge has determined they have a “mental defect” or they have been forced into a mental institution — but an evaluation alone would not trigger the prohibition.

It is unclear whether officials could have invoked the “red flag” regulation after the high school incident. Police and prosecutors wouldn't provide details on the incident, or say when he had purchased the weapons used in the assault.

The long list of mass shootings in the U.S. involving missed opportunities to intervene includes the 2018 massacre of 17 students at a high school in Parkland, Florida, where law enforcement officials had received numerous complaints about the gunman's threatening statements, and the killings of more than two dozen people at a Texas church in 2017 by a former U.S. Air Force serviceman who was able to buy a gun despite a violent history.