With 222 Cases, Italy Tries to Contain Virus as Isolated Town Hunker Down

Authorities were struggling to contain the number of cases, which by Monday had spread to a half-dozen regions and prompted Austria to temporarily halt rail traffic across its border with Italy.

Police manned checkpoints around quarantined towns in Italy's north on Monday and residents stocked up on food as the country became the focal point of the outbreak in Europe and fears of its cross-border spread.

Croatia, Hungary and Ireland advised against travel to the affected areas, and Italians traveling abroad began to feel the effects of a crackdown: A bus from Milan was barricaded by police in the French city of Lyon for health checks for several hours before being deemed to be virus-free and sent on its way;Alitalia passengers arriving in Mauritius were threatened with quarantine.

Civil protection officials said at least 229 people have tested positive for the virus in Italy. State television on Monday night reported the seventh death of an infected person — that of a 62-year-old man who already had serious health problems. The other six victims, also with pre-existing medical conditions, were elderly.

The majority of those known to be infected with COVID-19 hail from two main clusters — some 10 towns in Lombardy and another area in the neighboring region of Veneto. Italy has the highest number of cases outside Asia, underscoring the limits of Italy's prevention protocols, the most stringent in Europe.

Croatia, Hungary and Ireland advised against travel to the affected areas, and Italians traveling abroad began to feel the effects of a crackdown: A bus from Milan was barricaded by police in the French city of Lyon for health checks and Alitalia passengers arriving in Mauritius were threatened with quarantine.

Civil protection officials said at least 222 people had tested positive for the virus in Italy and that six people had died; all six fatalities were elderly people in the two main clusters in Lombardy and Veneto. It was the highest number of cases outside Asia, and underscored the limits of Italy's prevention protocols, the most stringent in Europe.

Officials still hadn’t pinpointed the origin of Italy's outbreak or whether the two clusters were related. With the numbers rising, authorities were struggling to contain the number of cases, which by Monday had spread to a half-dozen regions and prompted Austria to temporarily halt rail traffic across its border with Italy.

“These rapid developments over the weekend have shown how quickly this situation can change,” EU Health Commissioner Stella Kyriakides said in Brussels. “We need to take this situation of course very seriously, but we must not give in to panic, and, even more importantly, to disinformation.”

On Tuesday, Kyriakides will meet in Rome with Italy's health ministers, those from bordering countries — Austria, France, Slovenia and Switzerland, as well as the ministers from Germany and Croatia.

For Italians barricaded in the dozen small towns around the two main clusters of the outbreak, the outlook for the next two weeks appeared bleak, with the only order of business getting enough food in the house, keeping distance from one another and getting tested.

“This wasn't a very exciting place to begin with," said Andrea Casalis, a 27-year-old from Vo'Euganeo, a town of 3,500 people at the epicenter of the Veneto cluster. “Since we can't go to the bar, there's no much left to do."

Casalis had been due to start a new job in the food sector a few miles out of town, but that is now on hold — evidence of the cascading economic effect the outbreak is beginning to wreak on the northern powerhouse of Italy's economy.

“I try to stay optimistic, but the perception of what's going on changes subjectively," he said.

Speaking on state-run RAI news, virologist Ilaria Capua of the University of Florida noted that Italy’s high number of cases were due to the fact that Italy was “actively seeking them out.” More than 3,000 people have been tested for the virus, most of whom had direct contact with those infected.

“It is likely that the more we look, the more we will find,” Capua said. But she stressed that the majority of cases likely wouldn't even require a doctor's visit and that Italy's numbers are “very analogous to what we will see in many other European countries.”

Civil protection officials insisted that Italy was still a safe place to visit. Veneto regional president Luca Zaia lamented that he never imagined he would ever have to cancel Venice's Carnival — another economic blow to the famed lagoon city that already saw tourism plummet after last year's floods.

Italy, however, wasn’t taking chances and effectively sealed off a dozen northern towns where more than 200 of the cases were found. On Monday, police wearing face masks manned checkpoints along the road into Codogno, southeast of Milan, where the first patient to test positive for the virus was hospitalized last week.

Residents wearing face masks and gloves lined up at Codogno's supermarket to stock up on food, only to find out the market was still closed on orders of the mayor. Later, groups of four at a time were allowed into the bakery in nearby Casalpusterlengo, and one at a time into the pharmacy.

Italian farm lobby Coldiretti reported a 5%-10% increase in fresh fruit and produce purchases this weekend across the country, as Italians stocked up fearing possible future quarantines even in regions that hadn't registered any cases. Hand disinfectant and face masks were in short supply; in Genoa — which hasn't had any cases — the supermarket shelves were empty.

Civil protection chief Angelo Borrelli acknowledged that there were some supply issues with the virus test kits, and Lombardy officials announced they were no longer automatically testing people who had come into contact with infected patients. Those people were placed on home quarantine under monitoring, and were only tested if they showed symptoms, said regional health official Giulio Gallera. 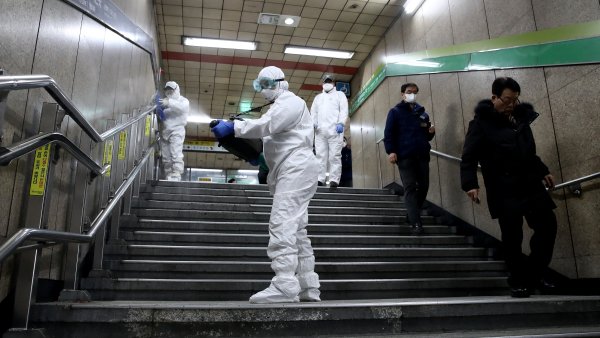 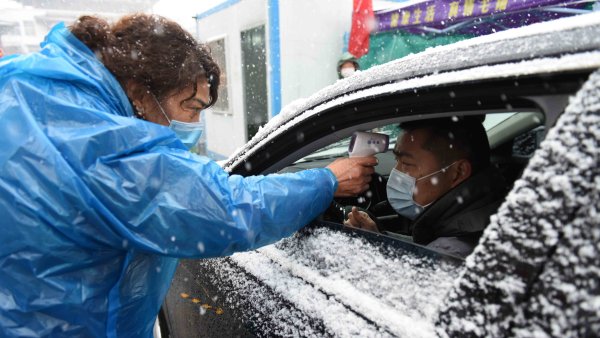 Railroad authorities reported delays or cancellations affecting high-speed and other long-distance trains from north to south, blamed on the need to do health checks in railroad structures along the routes, including those passing through one of the quarantined towns in Lombardy. State railways was offering full reimbursement of tickets for travelers who didn't want to travel due the virus outbreak.

Until last week, Italy only had registered three people who tested positive for the virus, including a Chinese couple visiting from Wuhan. They have been recovering at Rome's infectious disease hospital.

A joint team from the World Health Organization and the European Center for Disease Prevention and Control were set to visit Italy.