"Tents are not appropriate for housing. They lack clean water and adequate hygiene facilities," Mayor Kim Janey said, adding that sexual assault, drug use and violence has been rampant in the area

Boston will no longer allow people to live in tents or temporary shelters, Mayor Kim Janey announced on Tuesday, unveiling a plan to address the addiction and homelessness crises at the area known as "Mass. and Cass."

Addiction, homelessness and related public health issues have been declared a public health crisis in the city as well, Janey said.

The city plans to start removing encampments in the area near Massachusetts Avenue and Melnea Cass Boulevard, though residents will be notified in advance and offered shelter before the tents are removed, Janey said at an announcement at City Hall.

"Tents are not appropriate for housing. They lack clean water and adequate hygiene facilities," she said, adding that sexual assault, drug use and violence has been rampant in the area.

A city services team has been responding to four to five overdoses per day, on average, Janey said.

Janey emphasized that enforcement of the new rule will be "a last resort," and said that Tuesday's plan is part of a greater strategy to provide services to the people living at Mass. and Cass, who are among Boston's most vulnerable residents.

"We know we must tackle this with new urgency and intentionality. These orders will allow us to do just that," said Marty Martinez, head of the city's Office Health and Human Services.

The TEN takes a look at the problems at Mass. and Cass in Boston, how they began and what is being done to help.

Boston has been working for months to find housing for people living at Mass. and Cass., in the city's Newmarket neighborhood.

Reginald Gumes has been without a permanent home for nearly a decade and now lives in one of the tents that line Southampton Street.

"We're fighting to stay alive out here," he said. "Nowhere to sleep, nowhere to go."

Word quickly spread among residents Tuesday that the city wants to start removing the tents in the neighborhood.

"I support that, as long as they have places for us," said Gumes, 58. "This is really living in a jungle."

Last month, workers at the Greater Boston Food Bank in nearby South End told NBC10 Boston that they no longer feel safe going to and from work, and that the food bank is now spending more than $500,000 a year for full-time security, which could be used to buy 1 million meals.

Community activists have been fighting for a solution for years, but proposals have often been met with backlash, including a recent move to put about 30 unhoused people up at a hotel in Revere.

Recent News on Mass. and Cass 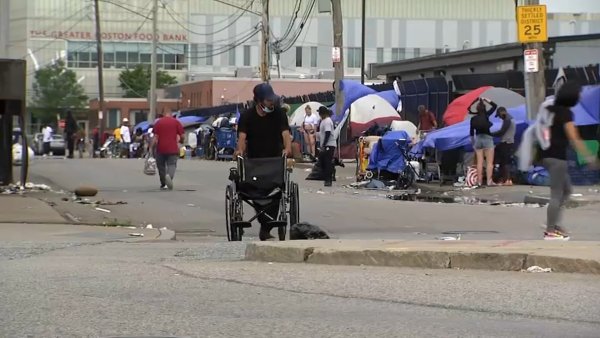