Officials: Pittsburgh Bridge Not Bad Enough to Close After Inspection

The structure, built five decades ago, is one of six bridges with similar designs in the state

The bridge that collapsed in Pittsburgh last week showed deterioration during a September inspection that was not bad enough to require its closure, the Pennsylvania Department of Transportation said Monday.

The agency will not release the full inspection report, PennDOT spokesperson Alexis Campbell said, citing state and federal laws and the ongoing investigation into the Friday morning failure of the Forbes Avenue bridge over Fern Hollow Creek in Frick Park.

Campbell did provide some details about the inspection four months ago, including that there has been a 26-ton (24,000 kilo) posted weight limit on the bridge since 2014.

As with previous inspections, the Sept. 29 examination rated the steel K-frame bridge a 4 on a scale from 0 to 9, which is deemed a poor rating.

President Joe Biden met Friday with first responders in Pittsburgh at the site of a bridge that collapsed earlier that day. After learning that a passerby helped rescue motorists who were trapped in their car, Biden said, “It really is [a miracle]— it’s astounding.”

“This bridge’s design relies on the quality of frame elements alone without any back-up support (known as redundancy) and reports show deterioration that did not warrant closure, but supported the imposition of a posted weight limit to restrict the weight of loads,” Campbell said in an email.

The structure, built five decades ago, is one of six bridges with similar designs in the state. Campbell said the reasons it failed and collapsed remain unclear and are the subject of investigations.

A team from the National Transportation Safety Board was at the scene Monday as crews siphoned gasoline and brought in cranes to lift five vehicles and a municipal bus off the crumpled remains of the bridge.

By late afternoon the bus had been pulled out of the ravine, attached to a crane by three straps.

There were no fatalities in the collapse, but a few people required hospital treatment, and as of Monday one adult was still getting care inside a UPMC facility, a hospital system spokesperson said.

The daughter of a couple told the Pittsburgh Tribune-Review her parents had been crossing the bridge, on their way to provide care for a relative, when their pickup truck plummeted to the ground. 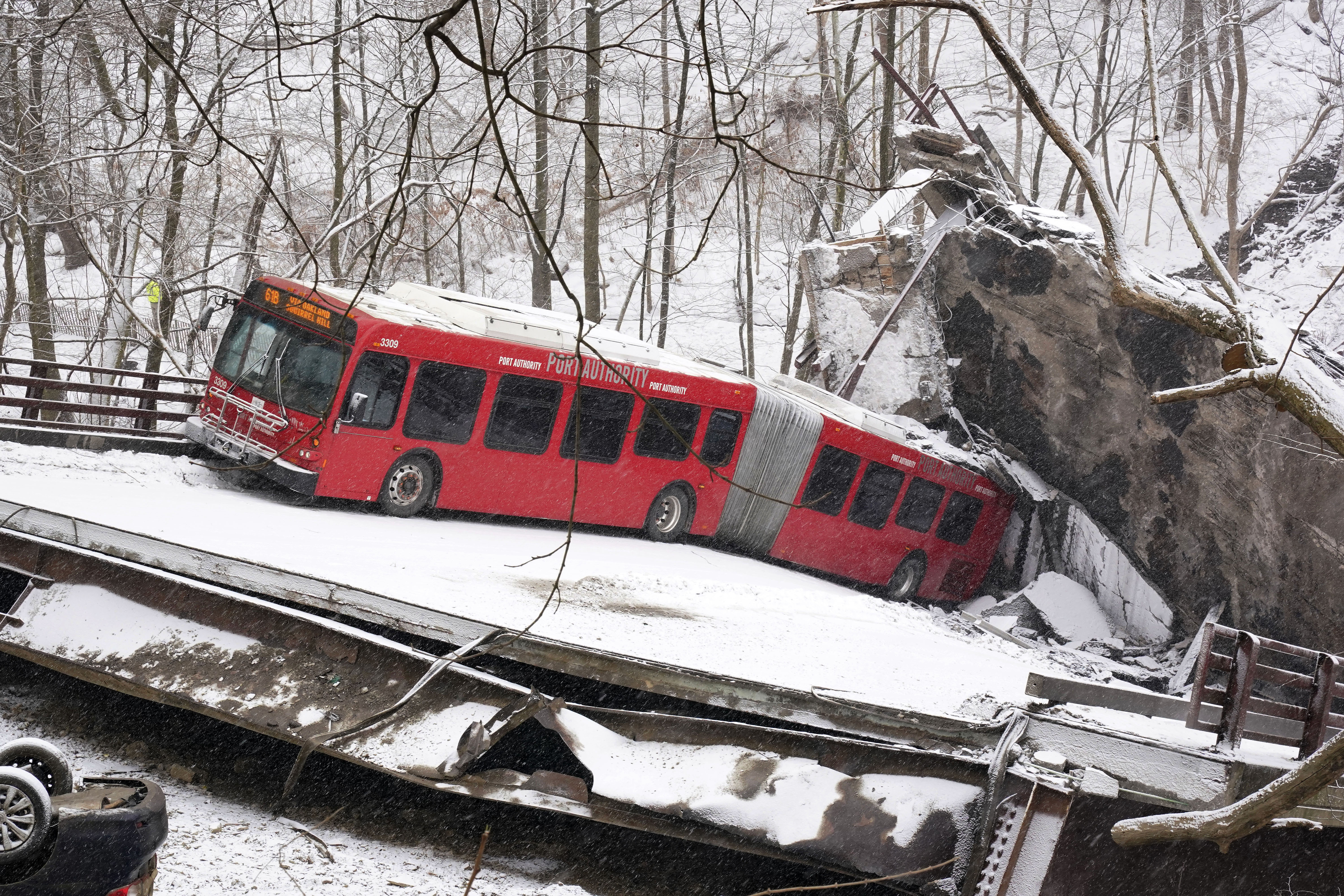 Tyrone and Velva Perry’s windshield cracked and their airbags deployed, Erin Perry said. When Tyrone Perry saw the bridge buckling, he figured he was about to die.

They watched in terror as another car flew by them and a third landed just feet away.

She said the Pittsburgh couple both suffered fractured vertebrae and were in a lot of pain but good spirits. Tyrone Perry sees the collapse whenever he closes his eyes, and Velva Perry still has a feeling she is falling.

“It’s so outrageous that this would happen; it was like a scene from an action movie," Erin Perry said.

Natural gas lines along the bridge ruptured, causing a large gas leak and evacuation of nearby homes.

After a weekend in which the curious found their way to check out the site, city public safety officials opened an observation area Monday, connected by a trail of less than a mile to a small parking area.

The collapse occurred hours before President Joe Biden arrived in Pittsburgh to tout a federal infrastructure law that has earmarked about $1.6 billion for Pennsylvania bridge work.