Police and Protesters Clash in Violent Weekend Across the US

One person was shot in both Austin, Texas, and Aurora, Colorado, amid protests against police violence. A shooting was also reported in Portland, Oregon

Protests took a violent turn in several U.S. cities over the weekend with shootings in Texas, Colorado and Oregon, vehicles burning in California and Virginia, and police retreating in Seattle.

In Portland, Oregon, the epicenter of the nation's protests, a bag containing loaded rifle magazines and Molotov cocktails was found at a park near where protests have erupted for two months, following George Floyd’s death on May 25 in Minneapolis, police said.

A photo of the items was shared in a tweet from police late Sunday saying someone pointed out the bag to officers at Lownsdale Square Park late Sunday. No further information was immediately released.

The discovery came just hours after two people were arrested following reports that a shot was fired in the same park. Officers responded just before 7:30 p.m. A person believed to be the gunshot victim arrived later at a hospital via a private vehicle with non-life threatening injuries, police said.

The shooting is not believed to be tied to the protests, NBC News reported.

The protest late Sunday started peacefully, but intensified early Monday. U.S. agents declared an unlawful assembly and deployed several rounds of what appeared to be tear gas, flash bangs and pepper balls from the federal courthouse in downtown Portland.

Some protesters climbed over the fence surrounding the courthouse, while others shot fireworks, banged on the fence and projected lights on the building.

Just after 1 a.m., federal officers confronted protesters on the street and worked to clear the area. Several people were seen being detained, but it's unclear how many may have been arrested. Law enforcement deployed more gas and less-lethal munitions, and formed a line to push back demonstrators. Many dispersed, but a few protesters remained around 2 a.m.

Earlier Sunday in Seattle, police officers retreated into a precinct station, hours after large demonstrations in the city’s Capitol Hill neighborhood. Some demonstrators lingered after officers filed into the department’s East Precinct around 1 a.m., but most cleared out a short time later, according to video posted online. 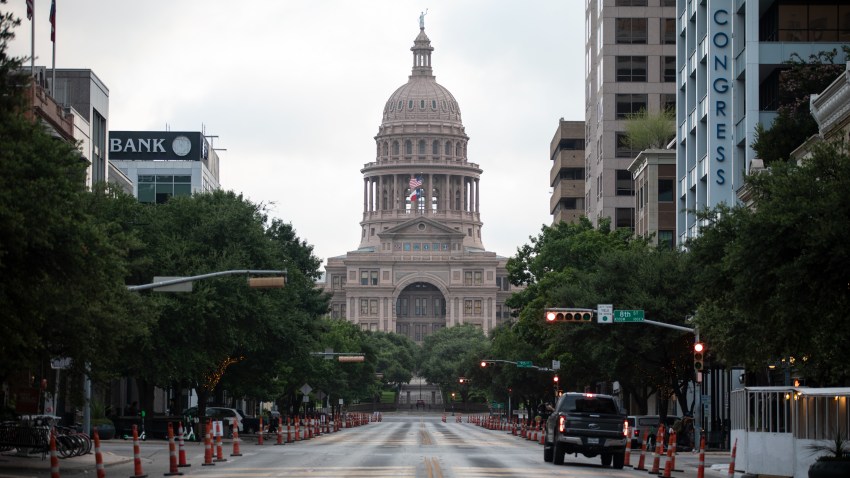 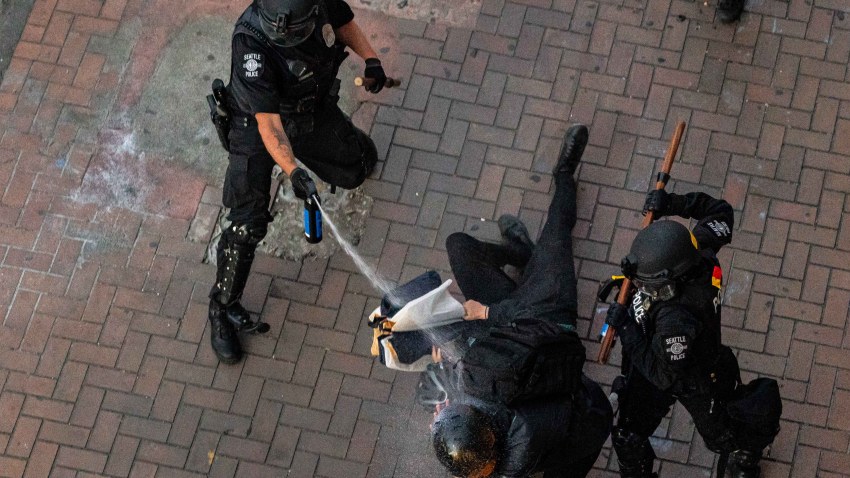 At a late-night news conference, Seattle police Chief Carmen Best called for peace. Rocks, bottles, fireworks and mortars were fired at police during the weekend unrest, and police said they arrested at least 45 people for assaults on officers, obstruction and failure to disperse. Twenty-one officers were hurt, with most of their injuries considered minor, police said.

The weekend of unrest stemmed from the weeks of protests over racial injustice and the police treatment of people of color that flared up after Floyd's death.

In the Texas capital of Austin, 28-year-old Garrett Foster was shot and killed Saturday night by a person who had driven through the march against police violence.

Austin Police Chief Brian Manley said a car turned onto the block where protesters stood and honked its horn. The driver and several witnesses told police that Foster approached the driver and pointed an assault rifle at them.

In video streamed live on Facebook, a car can be heard honking before several shots ring out and protesters start screaming and scattering for cover. Police could then be seen tending to someone lying in the street.

Manley said the driver called 911 to report the incident and was later taken into custody and released. Police didn’t immediately identify the driver.

The federal officers sent into Portland, Oregon, by the Trump Administration to crack down on protests have been behaving in unpredictable ways that have caused confusion and fear in the city, said Celina Tebor, a reporter from the Oregonian. But she said the protests seem to have been only reinvigorated by their presence.

Sheila Foster, Garrett's mother, said she was told her son was pushing his fiancée, who uses a wheelchair, through an intersection when the suspect was driving “erratically” through the crowd. She said she was told the driver shot her son three times.

Portland, Oregon's largest city, saw a weekend of huge protests, which have been ongoing for the past two months. President Donald Trump sent federal agents to Portland to halt the unrest but state and local officials say they are making the situation worse.

In the hours leading up to the riot declaration, thousands of people marched through parts of the city. Protesters paused outside a downtown hotel, where federal agents are staying, chanting "Feds go home" and yelling the names of Black people killed by police.

Journalist Tuck Woodstock has been on the ground in Portland covering protests in the city, and putting their own safety in danger to do so. Woodstock joined LX News to talk about the importance of independent and volunteer journalists to tell this story, and what they are seeing on the streets.

In the Denver suburb of Aurora, Colorado, meanwhile, a protester shot and wounded someone after a car drove through a crowd marching on an interstate highway, police said. The wounded person was taken to a hospital in stable condition. Police didn’t release many details about the shooting, including whether the person who was shot had been in the car. Police said on Twitter that demonstrators also caused “major damage” to a courthouse.

In New York City Saturday, thousands marched across the Brooklyn Bridge in solidarity with the activists facing off with federal authorities in Portland. On Sunday, hundreds of protesters headed north on FDR Drive, blocking traffic for nearly an hour. Their message was Black women's lives matter.

Fourteen people were arrested and at least six NYPD vehicles were damaged, police said. One person was caught on video striking a police van with a picket sign. Several others spray painted "FTP" on the vehicles, NBC New York reported.

In Virginia's capital, Richmond, a dump truck was torched as several hundred protesters and police faced off late Saturday during a demonstration of support for the protesters in Portland. Police declared it to be an “unlawful assembly” at around 11 p.m. and used what appeared to be tear gas to disperse the group. Five people were arrested in the incident and charged with unlawful assembly. A sixth person was also arrested and charged with rioting and assault on a law enforcement officer.

In downtown Atlanta on Sunday, federal agents examined damage to an Immigration and Customs Enforcement facility where windows were shattered late Saturday. The FBI and the Department of Homeland Security, FBI spokesman Kevin Rowson said in an email. No arrests had been announced.

And in Baltimore, people from a group of nearly 100 demonstrators spray-painted anti-police messages on a Fraternal Order of Police building and adjacent sidewalks on Saturday night, The Baltimore Sun reported.

Associated Press writers Gillian Flaccus and Sara Cline in Portland, Oregon, and Sally Ho and Chris Grygiel in Seattle contributed to this report.