Details are emerging about the chaotic scene at a New Hampshire church over the weekend when a gunman allegedly opened fire at a wedding, seriously wounding a bishop and injuring the bride and groom.

According to authorities, the alleged gunman — identified as Dale Holloway, 37 — arrived at New England Pentecostal Church in Pelham during the wedding. He allegedly shot 75-year-old Bishop Stanley Choate in the chest and Claire McMullen, 60, in the arm. The groom, Mark Castiglione, 60, was wounded when he was hit in the head with a firearm.

Angelo Castiglione, the father of the groom, said he was sitting in the front pew when he saw the gunman run up.

"The bishop turned around to face him to see what was going on and this guy shot him point blank right in the chest," Castiglione told NBC10 Boston Sunday night.

"Before you know it the guy pulled out a gun and aimed it right at the bishop. Shot him twice. And aimed toward my son and his wife, shot again and she got a bullet through the arm.”

Pelham Police Chief Joseph Roark said guests at the wedding tackled and subdued the shooter by the time authorities arrived.

Castiglione’s is among the few accounts of the chaotic incident, which rocked the community and has authorities searching for a possible motive. 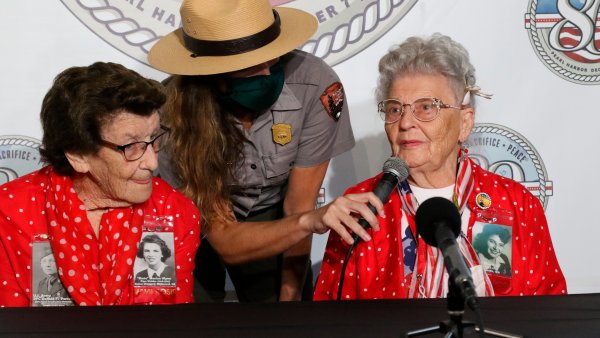 Janail Archer, who was not at the wedding, told NBC10 Boston Saturday that her father, Othniel Archer, a deacon at the church, was among those who tackled the gunman.

Archer said her father “jumped off the balcony and went and tackle the shooter and called for help and a couple of others church goers for attendees of the wedding jumped up and helped hold him down.”

Holloway is facing multiple charges including attempted murder in connection with the incident.

It was the second tragedy to hit the community this month after the death of 60-year-old minister Luis Garcia, who was shot to death Oct. 1 in Londonderry.

Officials have not released a motive in the attack, but are investigating the possibility the two shootings are related.

Mark Castiglione is the father of the man charged with killing Garcia, Agati said.

Brandon Castiglione, 24, has been charged in the killing of Garcia. He waived arraignment and is currently being held without bail. A phone number or lawyer information for him could not be found.

Holloway is expected to be arraigned on Tuesday at 1 p.m. at Hillsborough County Superior Court South in Nashua. It's unclear if he has an attorney.

While investigators are still working to figure out why Holloway targeted the church's bishop, they say this was not a random act of violence inside a church.

"The public was never in any danger," Agati said. "This was not an individual who was seeking a house of worship and just walked in."

Church leaders announced that services have been cancelled until Oct. 20, the Union Leader reported. CCF Ministries in Lowell are providing a space for worshippers until then, the paper said.