Sen. Chuck Schumer was unanimously elected Thursday for another term as Senate Democratic leader, helming a bolstered 51-seat majority for a new era of divided government in Congress but intent on “getting things done” for the country.

Senate Democrats met behind closed doors at the Capitol to choose their leadership team for the new Congress that begins in January. The session was quick and upbeat, with no challengers. Unlike the contested Republican elections, the Democratic leaders were selected by acclamation. Applause was heard in the halls.

“We had a great unified meeting, where we were both very glad about what we were able to accomplish in the last Congress and setting aspirations — strong aspirations — that we will accomplish as much in the next two years,” Schumer said afterward, flanked by the dozen-member team.

As Senate majority leader, Schumer has proven to be a surprisingly steady, if frenzied, force in one of the more consequential sessions of Congress. But with Republicans taking control of the House and confronting President Joe Biden in the new year, it will be a fresh challenge for Schumer in divided Washington.

The Brooklyn-born Schumer took the top position in the weeks after the Jan. 6, 2021, attack on the Capitol, and has led his party through the COVID-19 crisis and unexpected legislative achievements, many of them bipartisan. A former campaign chief, he steered the party to the majority and expanded it to 51 seats with Sen. Raphael Warnock's special election win Tuesday in Georgia.

Senate Democrats filled out their leadership team both with new and returning figures.

Sen. Dick Durbin of Illinois was elected for another term in the No. 2 spot as the Democratic whip. The No. 3 position went to Sen. Debbie Stabenow of Michigan. And Sen. Patty Murray of Washington was nominated to be the Senate president pro-tempore, and will face a Senate vote in the new year for the position. This would make her third in the line of presidential succession after the vice president and House speaker.

Warnock received rousing applause when he entered the closed Thursday. His victory, alongside the election of Democrat John Fetterman, who flipped a GOP-held seat in Pennsylvania, expands the Democrats’ slim 50-50 hold on the Senate to a 51-seat majority in January. Fetterman and the other newly elected Democrats joined in Thursday’s voting.

“Obviously, Senator Warnock’s arrival gives all of us a bounce in our step, and it’s a chance to build on what we've done,” said Sen. Ron Wyden of Oregon, chairman of the Finance Committee, as he exited the session.

Schumer's reelection puts two New Yorkers at the top of the Democratic leadership in Congress, alongside Rep. Hakeem Jefferies, the incoming House minority leader. Jeffries was elected to lead Democrats after Speaker Nancy Pelosi's decision to step aside next year.

House Republicans have nominated GOP Leader Kevin McCarthy as the new House speaker, but he is struggling to amass the 218 votes that will be needed when he goes before the full House for the speaker’s vote in January.

McConnell beat back a rare challenge from Florida GOP Sen. Rick Scott, the party's campaign chief, who failed to win back the Senate majority for the Republicans.

Biden will face a divided Congress in the new year, which opens an era of potentially sharp partisan tensions and oversight investigations, but also creates the possibility for bipartisanship. 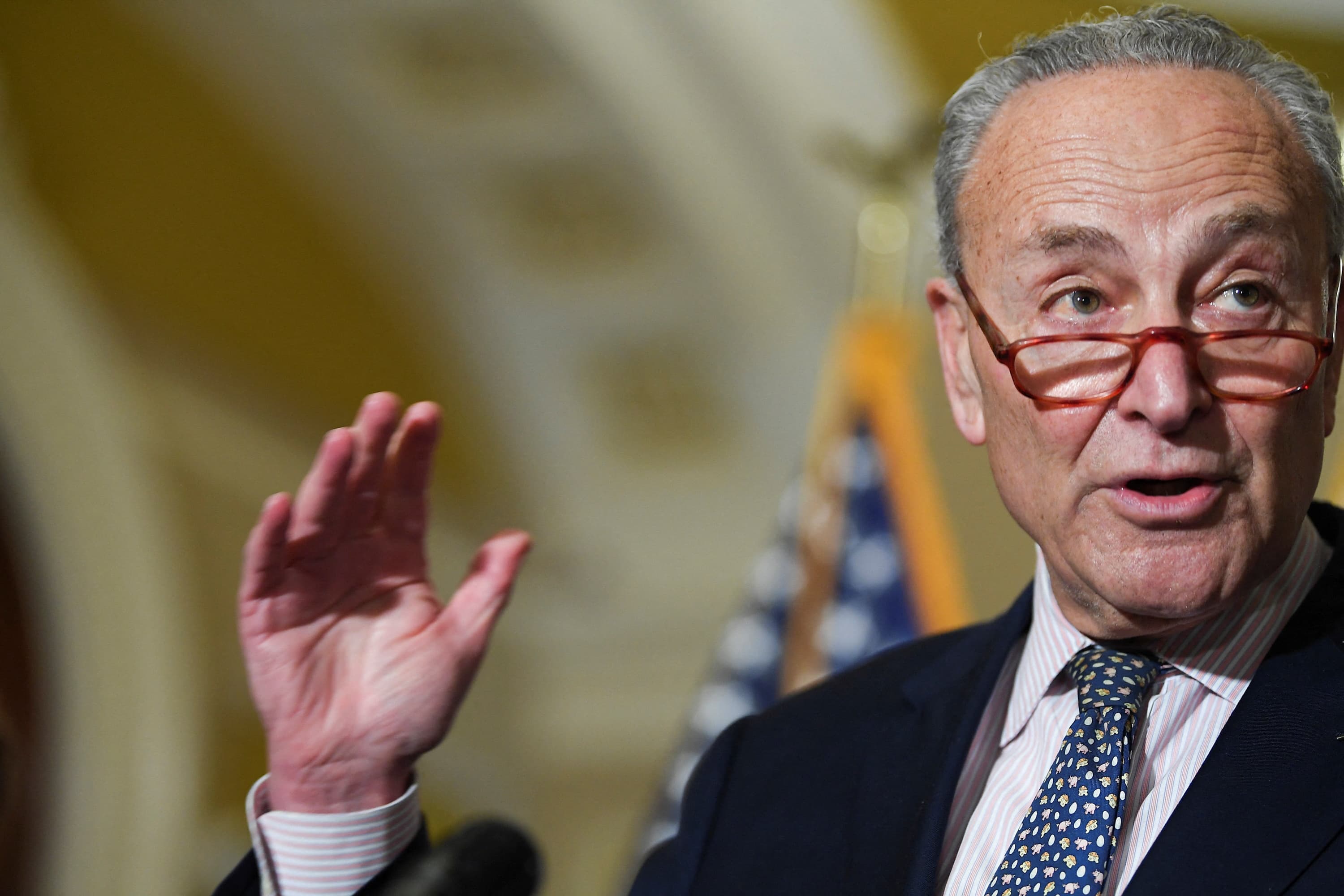 Schumer Says He and Pelosi Were ‘Resolute' About Calling in the Military to Stop ‘Hooligans' on Jan. 6 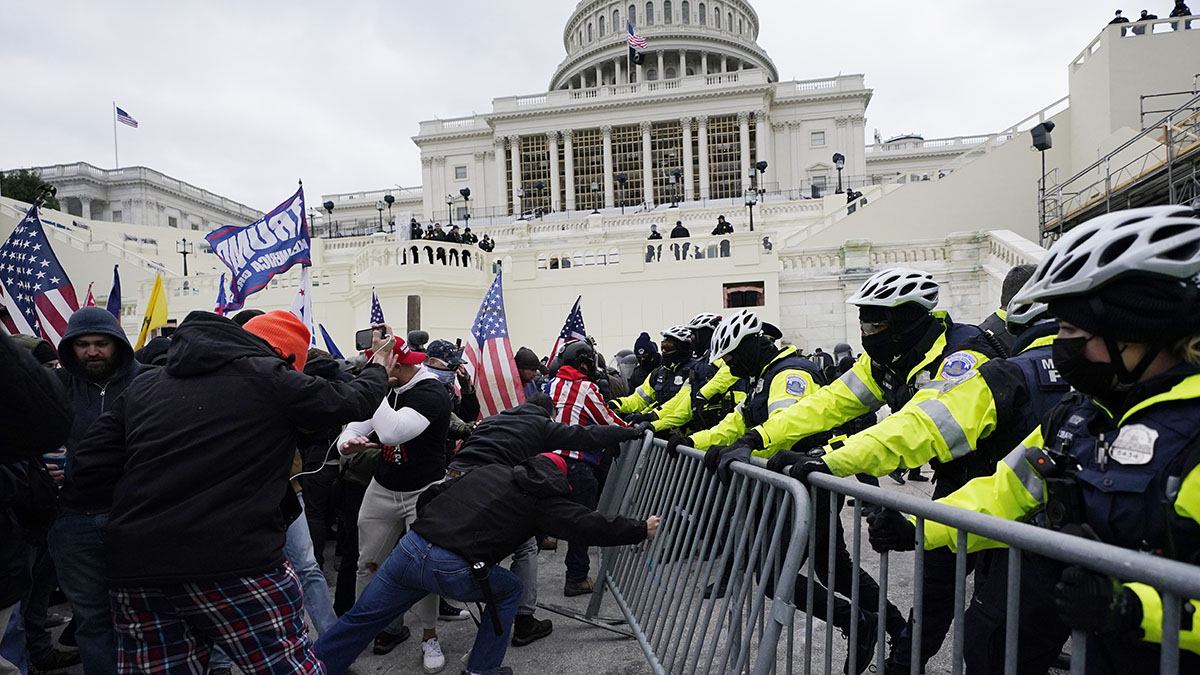 Rioter Who Encountered Senator Gets Over 4 Years in Prison

Schumer said later he will lead the Senate's 51-seat majority much the way he did this year, with a focus on “getting things done for the American people.”

He reiterated an invitation he has been making publicly to Republicans in Congress to move past Donald Trump, the former president, and work with Democrats to deliver on bipartisan priorities with Biden.

“We want to keep this chamber active, alive, and busy as much as possible,” Schumer said in a Senate speech.

“I make a clarion call to my Republican colleagues: reject MAGA and work with us,” he said, referring to Trump’s “Make America Great Again" slogan.

Bipartisanship has been elusive in recent years, but Schumer has been able to lead senators toward deals on infrastructure, a computer chips package and other measures that have found support from both parties, particularly as some Republicans work to move past Trump, the former president.

Schumer has declined to outline priorities for the next term as Democrats and Republicans prepare to hold separate private retreats in the new year to set their agendas.

“We’re very proud of what we were able to do in the 117th (Congress) and we’re looking forward to the 118th — the challenges will be there,” said Sen. Ben Cardin, D-Md.