‘This Is Nothing New': Stop Asian Hate Protesters, in Their Own Words

Racism against Asian Americans is nothing new to those who have experienced it. But a recent rise in violent crimes against them has ignited deep-rooted fears and drawn national attention. Now, members of the local Asian-American community and their allies are calling for people to educate themselves and end the hate.

“When you see those headlines and the names and faces of people, you see your own family -- your grandparents, your cousins, aunts and uncles,” student Rachel Bartkowski said. “It’s sad that it had to come to this point to happen, but I’m glad to see a lot more engagement from people.”

Bartkowski, who studies in Boston, is one of nine protesters who shared their experiences during a rally in Boston’s Roxbury neighborhood on March 27. Organized by the ANSWER Coalition (Act Now to Stop War End Racism), the demonstration was among many across the country condemning racist acts of violence against Asian Americans.

Attacks against Asian Americans are up, with 31% of Asian Americans reporting racist slurs or jokes since the start of the pandemic, according to recent data from the Pew Research Center.

“We are not the reason for COVID," Boston resident Chrissie Szynanski said, "and to bash or attack any other Asian person just because you think that may be the case is truly not going to solve anything."

Some at the rally said the rise in overt racism -- while disturbing -- is a sad reality for people of color.

“This is nothing new,” Boston resident Prema Bangera said. “The murder of George Floyd didn’t awaken the Black community or the BIPOC (Black, Indigenous and People of Color) community to the fact that racism exists. We’ve been dealing with it.”

Still, many attendees pointed to recent attacks -- including the shootings in Atlanta that left eight people dead, six of whom were women of Asian descent -- as a source of magnified anxiety.

“It triggers us more,” Sam Man said. “My parents, my sister -- to see what happened in Atlanta -- they’re scared to go out now.”

Man went to the rally with Johnson Prak; both are Cambodian Americans from Lowell. Prak brought his five-year-old daughter, Autumn, who waved a yellow sign that read “Stop Asian Hate.”

“We were always taught to keep our heads down and, you know, brush it away,” Prak said. “I have kids and I have to speak up while I can for my kids, my parents, because they couldn’t speak for themselves. And now that we’re here we have to shed light on what’s really going on.”

Protesters emphasized that Asian Americans have been experiencing racism since long before the pandemic. Many described a lifetime of racial slurs, being fetishized or the subject of bigoted jokes, feeling ostracized or otherwise targeted for their race.

“Anti-Asian hate hasn’t been just from the pandemic. It goes way back. This is deeper,” Dorchester resident Manny Chong said. “This is something that we have to really understand in context to understand why certain things happen today.”

Allies like Morgan Brown admitted to being ignorant to the level of bigotry Asian Americans faced until it was brought into the national spotlight, in part by the pandemic and recent violence. Brown traveled to the Roxbury rally from Derry, New Hampshire, with two other allies to show their support.

In the wake of the Atlanta-area shootings that killed six Asian women last week, many Asian Americans across the country are coming to terms with the covert, and sometimes overt, racism they've experienced over a lifetime. NBCLX contributor Michelle Park spoke to fellow Asian Americans about the pain they’ve experienced over the past year — and why staying silent is no longer an option.

“We stand in solidarity with all of our brothers and sisters of color. The hate has gone too far and the arrogance is just -- it’s too much,” Brown said. “It’s hard to see people that you care about feel the kind of hate that you will never feel because we’re privileged and we need to take that privilege and help others.”

Husayn Karimi, one of the event's organizers, emphasized the need to view the current rise in violence against Asian Americans through a historical context. Using discrimination against Muslim Americans after the invasion of Iraq as an example, he said U.S. actions abroad can lead to racism at home.

“In terms of how do you stop it, we need to understand how we got here and the evolution and the historical precedent for this surge,” Karimi said. “That requires us to understand U.S. imperialism and U.S. wars because we see the same M.O. and the same story and the same trajectory as soon as the U.S. has a target under its scope.”

Karimi pointed out that Asians are not a monolith, but encompass people from all walks of life and from many different regions and cultures, including South Asia, Southeast Asia, East Asia and West Asia.

“I would love people to educate themselves on the history of what racist acts are, what microaggressions are and then how to speak and help and take action," Szynanski said. "Because I think a lot of people are spreading awareness right now, but the main thing that we need to do is actually take action in order to stop this.”

“I invite people to educate themselves and to understand that hatred is something that has been rampant in the foundation of this nation,” Del Rio said. “If you do not spend time knowing what is wrong, then you are part of the problem.”

Ultimately, the movement isn’t limited to the violence, according to Chong, who delivered a speech at the rally. It starts with a fundamental feeling that you don’t belong.

“Stop Asian Hate is a movement. This is a marathon, not a sprint,” Chong said. “It’s going to take all of us -- not just Asians -- but our whole community, our allies to share in this common fight against injustice.”

How to Help Stop Asian Hate in America 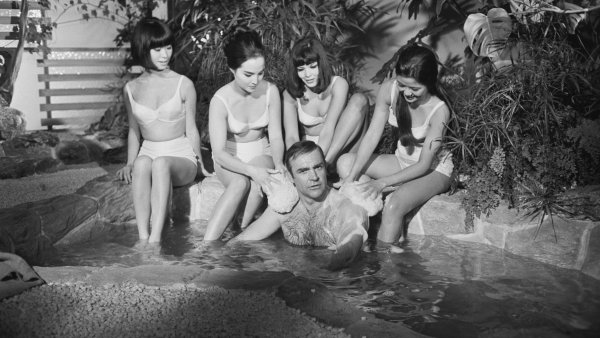