Who would have thought we'd end up here?

Tom Brady will enter Gillette Stadium as a visitor for the first time Sunday night when his Tampa Bay Buccaneers, fresh off their Super Bowl championship and eyeing a repeat in 2021, take on the New England Patriots and his former boss, Bill Belichick.

We've already hashed and rehashed the events that led to Brady's departure in March 2020. We don't expect Brady and Belichick to share a long embrace at midfield after the game.

But for local fans, Brady's "homecoming game" will be an opportunity to show their appreciation for the greatest quarterback of all time who helped guide the Patriots to nine Super Bowl appearances and six championships over two decades.

Julian Edelman said it's definitely going to be weird, as he is torn over his allegiance to Tom Brady and the Patriots.

While Brady sits atop the Boston sports pantheon, he's not the first notable local athlete to return to the city in another uniform. Let's travel down the nostalgia trail to relive the other homecomings of Boston sports stars (and a couple bonus homecoming games for star NFL QBs).

The Backstory: Clemens pitched 13 stellar seasons for the Red Sox, earning three Cy Young Awards and American League MVP in 1986. When his contract expired following the 1996 season, however, Boston made little effort to re-sign him, with general manager Dan Duquette noting he was in the “twilight” of his career. Clemens signed a four-year, $40 million deal with the Toronto Blue Jays that offseason with a determination to prove Duquette wrong.

The Game: Statement made. Clemens was absolutely dominant in his first start at Fenway Park as a visitor, striking out 16 of the 24 batters he faced over eight innings in a 3-1 Blue Jays win. Clemens got a standing ovation from the Fenway faithful as he walked off the field in the eighth and appeared to glare at the Boston owner’s box on his way to the dugout. Tough day for Red Sox management.

The Backstory: Bourque accomplished pretty much everything over a 21-year career in Boston -- except winning a Stanley Cup. So, with the Bruins floundering during the 1999-2000 season, Bourque requested a trade to the loaded Colorado Avalanche. The Avs lost in the Western Conference Finals that season, motivating Bourque to play one more season at age 40 -- and return to Boston one last time.

The Game: Bourque brought his A game for this one, tallying two assists in the first period to the delight of the Boston crowd as Colorado rolled to a 4-2 win. But this wouldn’t be the fans’ last opportunity to honor the beloved defenseman. After the Avs won the Stanley Cup in 2001, Bourque returned for a rally at City Hall to celebrate his long-awaited championship with Boston fans.

The Backstory: A former No. 1 overall pick who set multiple franchise records over nine seasons in New England, Bledsoe became expendable after Brady led the Patriots to Super Bowl glory in 2001. Bledsoe enjoyed one of his best seasons in 2002 after the Patriots traded him to Buffalo and went on to make the Pro Bowl. He didn’t fare too well in his first trip back to Foxboro, though.

The Game: This was a win on all fronts for Patriots fans, who gave Bledsoe a well-deserved ovation then watched as he threw four interceptions in New England’s 27-17 victory. Bledsoe threw for 145 more yards than Brady (183 passing yards), but his former backup played turnover-free football. Neither the Patriots nor the Bills made the playoffs that year, but the rest, as they say, is history.

The Backstory: A year after Ray Allen bolted for Miami, the other two members of the Big Three took their talents to Brooklyn in a blockbuster 2013 trade that included four first-round picks (and eventually helped the Celtics land Jaylen Brown and Jayson Tatum). Pierce and Garnett intended to chase a championship with the Nets, but they were just 19-22 entering Pierce’s first game back at TD Garden after an illustrious 15 seasons that included the franchise’s first title since 1986.

The Game: The pregame scene was spectacular, with the sellout Boston crowd giving Pierce and Garnett massive ovations during their introductions and after their tribute videos on the Jumbotron. The game? Not so much. Pierce and Garnett combined for 12 points on 5 of 16 shooting in a low-scoring scrap that Brooklyn barely won. More memorable was Pierce’s 3-pointer on his final shot at TD Garden as a member of the Clippers in February 2017.

The Backstory: Chara joined the Bruins in 2006 free agency and was a rock on the blue line for the next 14 seasons, earning five All-Star nods while captaining Boston to three Stanley Cup appearances and a title in 2011. But the B's decided to go younger on the back end entering the 2020-21 season, letting the 42-year-old Chara walk in free agency. He signed a one-year deal with the Washington Capitals in December 2020 and thanks to the NHL's COVID-related division realignment would face his former team seven times of the course of the regular season.

The Game: Chara returned to an empty TD Garden in early March due to COVID, but the Bruins still honored him with a touching tribute video during the game that included messages from fans. Just over a month later, B's fans gave Chara a proper welcome with a standing ovation in an April 11 game at the Garden. Washington won 8-1 in a rout, but his old club got the last laugh in the postseason, dispatching the Capitals in five games of their first-round playoff series.

The Backstory: Favre’s 16-year run with the Packers ended in controversy in 2008 when he announced his retirement in March, unretired in August and was traded to the Jets amid issues with Packers management. The following year, he signed with the NFC North rival Vikings and had quite the large target on his back when returned to Lambeau Field for the first time hoping to extend Minnesota’s division lead over his former team.

The Game: Aaron Rodgers may have been the Packers’ future, but his predecessor got the better of him in this one. Favre silenced the hostile Green Bay crowd by tossing four touchdown passes -- his most in a game that season to date -- in a double-digit win that improved Minnesota to 7-1. Favre took the Vikings to overtime of the NFC Championship Game in 2009 before falling to the eventual champion New Orleans Saints.

The Backstory: Manning reached pantheon status over his 13 seasons with the Colts but missed the entire 2011 season with a neck injury. With the No. 1 overall pick in the 2012 NFL Draft and intentions to use it on quarterback Andrew Luck, Indianapolis released Manning outright in March 2012. John Elway helped lure Manning to Denver, where he earned First-Team All-Pro honors in his first season but couldn’t lead the Broncos past the AFC Divisional Round.

The Game: Manning’s first trip back to Indy had everything: a raucous crowd, a thrilling QB battle between Manning and Luck and a near-comeback by Manning’s Broncos in a high-scoring affair. Manning led Denver on two touchdown drives in the fourth quarter, but a pair of Adam Vinatieri field goals helped the Colts hold on for the win. Manning lost the battle but won the war, as he led the Broncos to a Super Bowl title later that season. 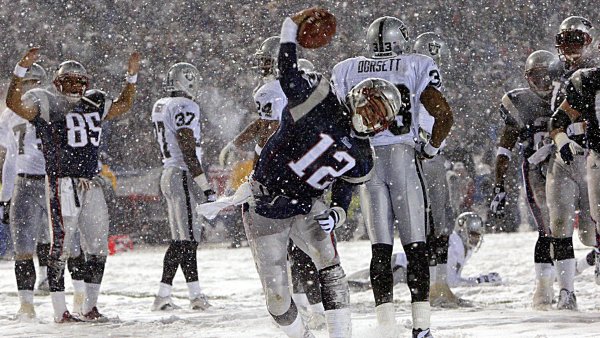 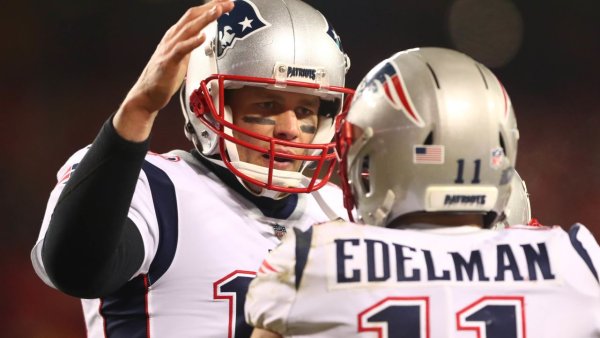 The Best Tom Brady Memes on Social Media Over the Years