US Veterinarians Are Helping Displaced Ukrainian Pets. Here's What They're Seeing

“Walking through the cold, bitter wind with their kids, their pets, their luggage and not knowing where they’re going to end up — these ladies were tough”

When Colorado veterinarian Jon Geller headed to a Romanian border crossing with Ukraine on March 13, he had two big suitcases filled with veterinary supplies and no idea what to expect.

“I had connected with a couple of the local veterinarians that have little vet clinics not too far from there and I said, ‘Look, if I come over, can we try to figure something out?’ They said, ‘Come on over.’ Luckily, one of them was friends with one of the border police that works at this little border station, which is a ferry station called Isaccea,” he told TODAY. “We were able to set up a government-approved, veterinary licensed veterinary clinic in a large tent that they provided at this border station.”

The border station became a sort of Olympic Village with an array of tents run by volunteers from around the world offering services to Ukrainian refugees fleeing their country in the wake of the Russian invasion, according to Geller.

He worked with the local veterinarians as well as volunteers from a veterinary school in Croatia — multilingual students who proved invaluable as translators — to put in an exam table, refrigerator for vaccines and other supplies. The vet students helped create medical forms translated into Ukrainian.

“Most of the work initially was refugees with their pets coming across on the ferry either in a car or on foot,” he said. “I would say the pets were evenly divided between dogs and cats, and most of them were on the small side. What that meant was those people that were on foot weren’t able to bring their larger dogs across and they did have to leave them behind. Then that turned into the second type of pet we saw, which was rescue teams in Ukraine rounding up these pets that had been abandoned and bringing them over in groups to a shelter in Romania.” 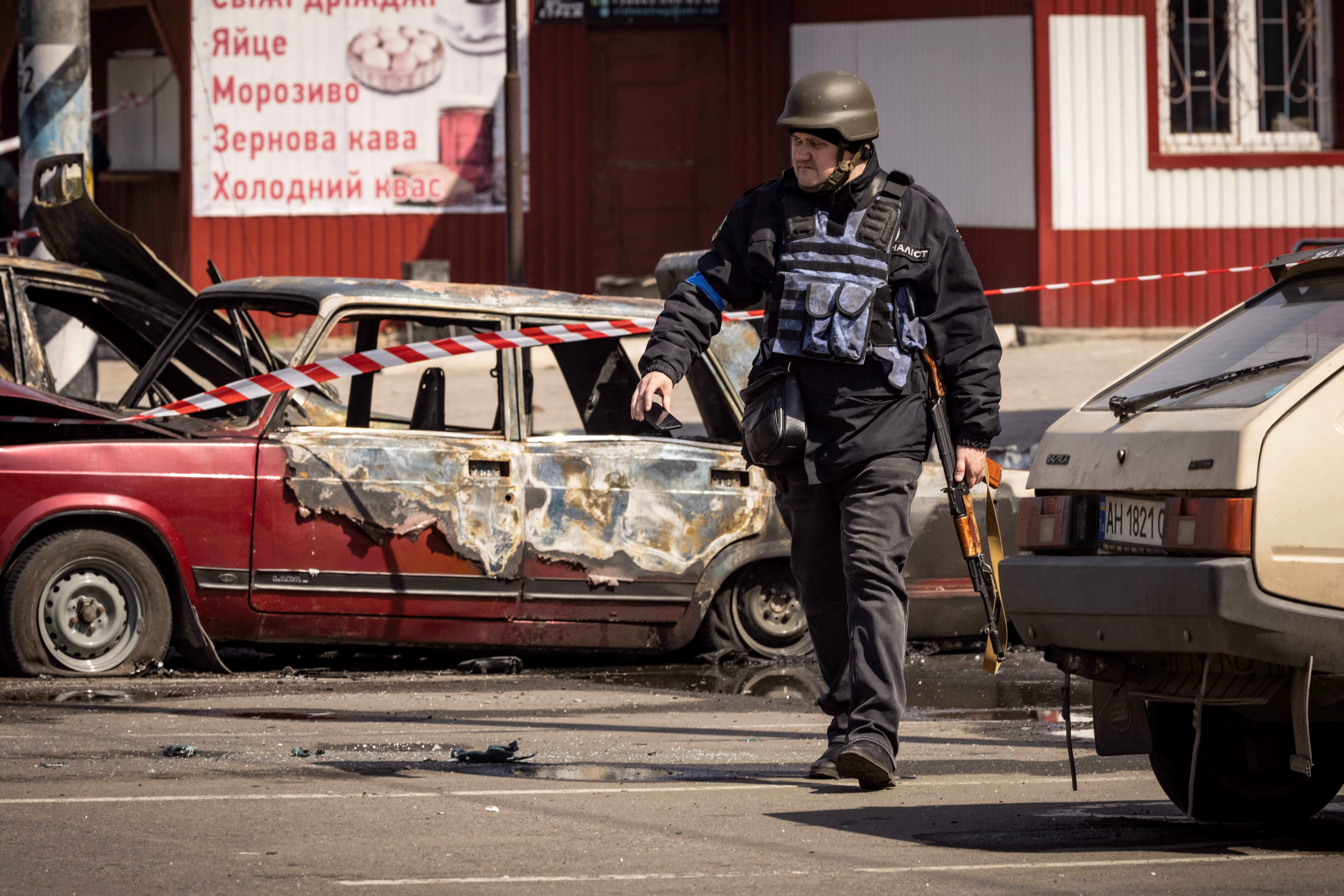 Geller and his fellow volunteers — who over the course of the next two weeks garnered the nickname the Blue Vet Group because they’d work late into the night in their glowing blue tent — also treated Romanian street dogs in need of care. But primarily, they took care of refugee pets to allow them to continue traveling throughout Europe.

One Ukrainian man came across the ferry with his Belgian Malinois.

“One of our vet students was translating, and he indicated all he could talk about is his dog. They were just a team of two,” Geller said. “He was trying to travel across Eastern Europe to Western Europe where his wife and family were.”

But the Ukrainian man worked on a Russian fishing boat and had Russian credit cards, which had all been cut off by international sanctions. He had no money and was out of gas. Geller said one of the local pet rescue groups gave him enough cash to drive to Austria, where he ran out of money and gas again. The veterinary students on Geller’s team arranged to get him cash from someone in Germany.

“It took him five days to hook up with his family, but he and his dog made it,” Geller said. “He was so in love with this dog. He just showed us video after video. His dog was great — really friendly.”

Though Geller returned to Fort Collins, Colorado, at the end of March, he plans to return soon to help establish a second tent on the Ukrainian side of the border to help pets quarantined for 21 days after a rabies shot before being allowed into Romania.

His nonprofit, The Street Dog Coalition, which provides free veterinary services to pets of people experiencing homelessness, will continue to run the existing tent through April as part of its “Project Ukraine” initiative with support from Greater Good Charities, SPCA International and donated veterinary supplies from Merck Animal Health, he said.

He’s been impressed by how “tough and stoic” the Ukrainian women are. Most men aged 18-60 are prohibited by their government from leaving Ukraine so they can stay and fight.

“Walking through the cold, bitter wind with their kids, their pets, their luggage and not knowing where they’re going to end up — these ladies were tough,” he said.

Because refugees came in waves whenever a ferry arrived, Geller and his team spent some of their downtime between ferries getting to know the international community of volunteers working for a common cause.

Geller, a 71-year-old who normally doesn’t smoke, drink or eat meat, joked that he “got corrupted” while trying to connect in a positive way while overseas. For starters, people with a little free Greek restaurant got him smoking Greek cigarettes. The Romanian border guards introduced him to Romanian fruit vodka. The nonprofit World Central Kitchen doled out hearty servings of Romanian chicken and pork, which he ate with gusto.

“This guy’s girlfriend was going to give me a Romanian tattoo, but I got out of there just in time,” he quipped.

He’s been deeply impacted by the experience and looks forward to returning to help more pets and people from Ukraine.

“What made the biggest impact on me was this amazing unification of the world for these Ukrainian refugees,” he said. “The positive energy of everybody coming together in a totally noncontroversial way — that feeling just blew me away. When’s the last time we felt that?”

A similar global camaraderie in support of Ukrainian refugees and their pets has been happening at a Polish border crossing at Medyka, according to Gary Weitzman, a veterinarian and president of the San Diego Humane Society in Southern California.

During a phone call from Krakow, Poland, on April 1, Weitzman said Ukrainian women from the nearby town of Lviv crossed the border to help as interpreters in the pop-up veterinary clinic where he spent four days.

“It’s so amazing how many languages they speak,” he told TODAY. “They’re joining different groups to help them as interpreters. … Everybody coming across is coming in need of everything. Our veterinary tent was one of the first five or six places for people to stop.”

Weitzman said most refugees fleeing the violence brought dogs and cats, though he did examine a ferret. One little girl even brought a huge pet snail she’d loved for several years to be checked out at the veterinary tent. (Fortunately, the snail was in good condition.)

“The animals that are still in Ukraine, that’s enough to break your heart to hear about,” he said. “The ones that are coming across are the lucky ones right now.”

Most of the pets have been in fairly good condition aside from stress, dehydration and the cold rain and snow. A Yorkie named Happy arrived wearing a little coat and parka but was still completely soaked.

Cats are often carried in refugees’ coats so the team gets them carriers and food after giving them fluids and warming them up in the tent.

“To be honest, I’m more worried about the people than the animals that are coming through,” he said. “But I think it does help them to be able to stop at a tent that has veterinary care in it, and animal people, and just make sure their babies are OK.”

Not all of the animals are fortunate enough to still be with their families. For instance, a stressed dog wandered into the border crossing area but was initially too traumatized to let anyone approach him. But Weitzman and other volunteers coaxed the hungry dog with treats and once he knew he was safe, “he just melted,” he said.

Volunteers named him Slava, the Ukrainian word for “glory.” Unfortunately, Slava isn’t microchipped, but the team is putting up posters and sharing his story on social media with the hopes that he’ll be reunited with his family.

“I did an exam on him and he seems absolutely healthy,” Weitzman said. “He’s just the sweetest guy. He’s safe and sound and warm and fed, and he’ll probably go off to the U.K. or somewhere in Europe to live if his family doesn’t find him. There are at least half a dozen people that absolutely want to take this dog. He’s definitely one of the lucky ones.”

He said the Polish people he’s encountered are “amazing,” that the team he worked with from the International Fund for Animal Welfare are “among the hardest working people I’ve ever seen,” and the “wonderful” folks at Greater Good Charities, which sponsored his trip, are sending money and supplies “to the right places.”

He’s also impressed with the team from World Central Kitchen, the nonprofit founded by Chef José Andrés in 2010 to feed people affected by humanitarian crises and natural disasters around the world.

“They deserve anything people can get to them because they’re feeding everybody — all of us, all of the refugees,” he said. “They’re just absolutely fantastic people.”

Like Geller, Weitzman is now back in the U.S. but plans to return soon — with other veterinarians from San Diego, and potentially to help on the Ukrainian side of the border. The Air Force veteran said his great-grandparents were Ukrainian, so he's glad to help out near his ancestral homeland.

“I think the whole world’s heart is breaking over what’s happening,” he said.

He believes veterinarians in private practices in Ukraine and neighboring countries will need financial support as the number of displaced pets continues to grow and the crisis continues.

Veterinarians continue to be critically important to pets evacuated from Ukraine by refugees, nonprofits and individual rescuers who still live inside the country.

Kyiv resident Ilona Kanevska, 51, has run numerous risky rescue missions evacuating dogs and cats from Ukrainian shelters in dangerous areas to Italy that often take days. She said it is important to get them out of the country because there is no more room in animal shelters and many near Kyiv and other cities have been destroyed or occupied by Russian troops.

She and her son and daughter are trying to save as many pets as possible.

“I love so much the animals because they are innocent and devoted without any condition. They are my friends and members of our family. The life is nothing without them, it is not full,” she told TODAY via Facebook Messenger. “Now we look for adoptions for them all over the world.”

So U.S. veterinarians continue to head to the region to help pets and people displaced by the crisis in Ukraine. Marty Becker, the veterinarian who founded Fear Free, which seeks to reduce fear, stress and anxiety for pets in animal hospitals, homes and shelters, arrived in Romania on Wednesday after numerous flight delays and cancellations.

Yesterday he joined colleagues in Isaccea at The Street Dog Coalition’s clinic and felt particularly moved meeting a Ukrainian mother, her two daughters and three pets.

The 5-year-old daughter, Vasilisa, showed him her hamster, Greicy, and perhaps encapsulated why the work of veterinarians with Ukrainian pets is so important.

“I asked Vasilisa about her hamster, and in broken English she told me he was her best friend,” he told TODAY.