Cheered on by President Joe Biden, House Democrats hustled Wednesday to pass the most ambitious effort in decades to overhaul policing nationwide, able to avoid clashing with moderates in their own party who are wary of reigniting a debate they say hurt them during last fall's election.

The sweeping legislation, which was first approved last summer but stalled in the Senate, was named in honor of Floyd, whose killing by police in Minnesota last Memorial Day sparked protests nationwide. The bill would ban chokeholds and “qualified immunity” for law enforcement and create national standards for policing in a bid to bolster accountability.

“My city is not an outlier, but rather an example of the inequalities our country has struggled with for centuries,” said Rep. Ilhan Omar, D-Minn., who represents the Minneapolis area near where Floyd died. She asked her colleagues if they would "have the moral courage to pursue justice and secure meaningful change?”

Nikkolas Smith’s portraits of George Floyd, Breonna Taylor and others are capturing the spirit of the Black Lives Matter movement by highlighting the value of Black life.

Democrats say they were determined to pass the bill a second time, to combat police brutality and institutional racism after the deaths of Floyd, Breonna Taylor and other Black Americans following interactions with law enforcement — images of which were sometimes jarringly captured on video. Those killings drew a national and international outcry.

Floyd’s family watched the emotional debate from a nearby House office building.

But the debate over legislation has turned into a political liability for Democrats as Republicans seized on calls by some activists and progressives to “defund the police” to argue that Democrats were intent on slashing police force budgets. This bill doesn't do that.

Former Democratic National Committee Chairman Tom Perez said it was a reason the party, after talking confidently of growing its majority in November, instead saw it shrink to just 10 seats, 221-211.

Democrats from the House and the Senate took a moment of silence on Monday to remember George Floyd and others killed during interactions with police officers.

“We played too much defense on ‘defund the police,’” Perez said.

“No one ran on ‘defund the police,’ but all you have to do is make that a political weapon,” said Rep. Henry Cuellar, a moderate Texas Democrat who has pushed for more police funding in places like his city of Laredo, where the law enforcement presence is especially concentrated given the close proximity to the Mexican border.

While Democrats used their then-larger majority to pass the police reform measure in the House last summer, it stalled in the then-Republican-controlled Senate, where GOP senators pushed an alternate plan that Democrats blocked from consideration, calling it inadequate. Democrats now control both chambers of Congress, but it seems unlikely the bill could pass the Senate without substantial changes to win GOP support.

Friends of George Floyd rally in his hometown of Houston, Texas to call for justice.

The bill had been set for a vote Thursday, but House leaders abruptly changed the schedule to wrap up their week's work after U.S. Capitol Police warned of threats of violence at the Capitol two months after the Jan. 6 siege.

Senior Democratic congressional aides said Wednesday they were eager to get the bill to the Senate, where negotiations will take longer.

Despite the political attacks by Republicans, even the House's more centrist lawmakers, some representing more conservative districts, backed the bill.

“Black Americans have endured generations of systemic racism and discrimination for too long, and this has been painfully evident in their treatment by law enforcement," said Rep. Suzan DelBene, D-Wash, who chairs the moderate New Democrat Coalition.

Their Complaints About Chauvin Were Dropped. Now They Wonder: Could He Have Been Stopped? 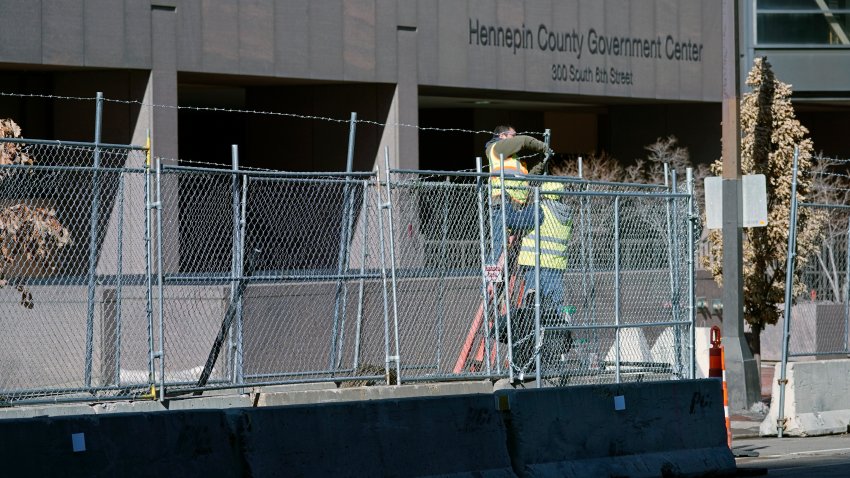 Growing Tension in Minneapolis as Trial Looms in Floyd Death

That endorsement came despite the bill's prohibitions on so-called qualified immunity, which shields law enforcement from certain lawsuits and is one of the main provisions that will likely need to be negotiated in any compromise with the Senate.

Police unions and other law enforcement groups have argued that, without such legal protections, fear of lawsuits will stop people from becoming police officers — even though the measure permits such suits only against law enforcement agencies, rather than all public employees.

California Rep. Karen Bass, who authored the bill, understands the challenge some House members face in supporting it.

“My colleagues, several of them, I do not make light of the difficulty they had getting reelected because of the lie around defunding the police,” Bass said.

In this feature by The New York Times, Minnesota protesters speak out on why they've been compelled to take to the streets following the death of George Floyd in police custody.

She called provisions limiting qualified immunity and easing standards for prosecution “the only measures that hold police accountable — that will actually decrease the number of times we have to see people killed on videotape.”

Bass said she would not make concessions before the bill cleared the House. Changes would only serve to weaken it while failing to shield Democrats from the false “defund the police” narrative surrounding it, she said.

She also acknowledged the challenges Democrats faced last November — and may likely see again — when former President Donald Trump's reelection campaign and other leading Republicans crowded the airwaves with images of cities around the country burning. But Bass said those attacks, like much of the opposition to the bill, are built on racism, promoting fears about how “the scary Black people are going to attack you if you try to rein in the police.”

“That's as old as apple pie in our history,” she said. “So do you not act because of that?”

Demonstrators protested around the world over the weekend to decry the death of George Floyd at the hands of Minneapolis police officers.

Still, she conceded that changes are likely to come if the measure is to win the minimum 60 votes it will need to advance in the Senate, which is now split 50-50. Bass said she'd been in contact with South Carolina Sen. Tim Scott, the only Black Republican in the chamber, and was confident he would help deliver some GOP support.

Scott said this week that the legislation's sticking points were qualified immunity and prosecutorial standards and that in both areas, “We have to protect individual officers.”

“That's a red line for me,” Scott said, adding, “Hopefully we'll come up with something that actually works.”

That could prove a tall order, despite the White House's vocal support for police reform. Biden has promised to combat systemic racism and signed executive orders he says will begin doing that, though advocates are expecting the new administration to go further.

Biden has tweeted that he hopes "to be able to sign into law a landmark police reform bill.”