California Recall Election: What You Need to Know

The California recall election that could remove first-term Democratic Gov. Gavin Newsom from office wraps up Tuesday. Nearly 8 million mail-in ballots — the form of voting most Californians use — already have been returned out of 22 million sent to registered voters.

The contest unfolded this summer as the nation's most populous state saw a surge in coronavirus infections from the highly contagious delta variant and the return of masks and other restrictions in many places. There have been raging wildfires, crime rates have risen and a homeless crisis persists unabated.

Republicans are hoping for an upset in a heavily Democratic state, where the GOP hasn’t won a statewide election since 2006. Newsom has been defending his record on the virus and warning that Republican front-runner Larry Elder, a conservative talk radio host, would undermine California's progressive values.

The election is being watched nationally and the outcome could influence the 2022 elections, when a closely divided Congress will be in play. 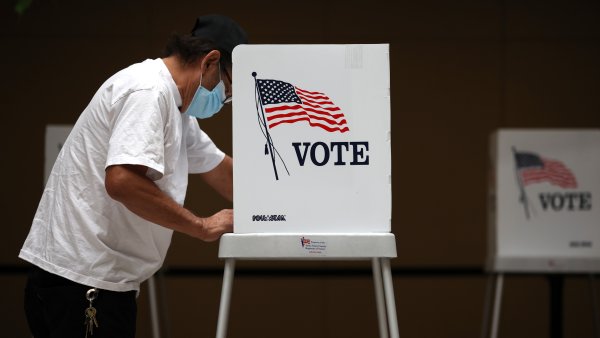 Calif. Last Recalled a Dem Governor in 2003. Today, Its Voters Are Less Republican and White

So, how did California arrive at this point? Here are some answers:

WHAT IS A RECALL ELECTION?

California is one of 20 states that have provisions to recall a sitting governor, 19 through elections. The state law establishing the rules goes back to 1911 and was intended to give more power to voters by allowing them to remove elected officials and repeal or pass laws by placing them on the ballot.

Recall attempts are common in the state, but they rarely get on the ballot and even fewer succeed. The only time a governor was recalled was 2003, when Democrat Gray Davis was removed and voters replaced him with Republican Arnold Schwarzenegger.

A federal judge in late August rejected a lawsuit that sought to block the recall on grounds it violated the Constitution by creating a situation where a sitting governor could lose the recall but still get more votes to stay in office than the winning replacement candidate receives.

A look at your voting options for this election.

WHY IS NEWSOM BEING RECALLED?

The answer is simple and complicated.

The simple part: Californians grew angry during the pandemic. Whipsaw stay-at-home orders by Newsom, crushing job losses from business closures, shuttered schools and the disruption of daily life soured just about everybody. Many of life’s routines were cut off at some point if not altogether, whether trips to the beach or lunches at a favorite taco joint.

The complicated part: In a state with nearly 40 million people there are many grievances, including California’s wallet-sapping taxes, rising food and gas prices, the threat of water rationing to contend with a long-running drought and the continuing threat of wildfires. As governor, Newsom is a ready target for that resentment.

He is also being hit by fallout from a multibillion-dollar fraud scandal at the state unemployment agency while weathering a public shaming for going maskless while dining out with friends and lobbyists at an exclusive restaurant last fall, while telling residents to stay home for safety.

HOW DOES THE RECALL ELECTION WORK IN CALIFORNIA?

There are two questions: Voters are being asked if Newsom should be removed, yes or no, and then who should replace him. They will choose from 46 replacement candidates.

If a majority of voters approve Newsom’s removal, the candidate who gets the most votes on the second question becomes governor. With dozens of candidates dividing those ballots, it’s possible a winner could get 25% or less of the vote.

Statistics compiled by Political Data Inc., a firm that gathers voting information for Democrats, independents and academics, found that nearly 8 million voters have returned mail-in ballots, which would equal about a 35% turnout rate with voting continuing through Tuesday.

Senior citizens are voting in their usual high numbers, while younger voters have been less enthusiastic so far.

The ballot may be shorter than usual, but the two questions could be as consequential as ever. Here's what's on the California recall election ballot.

WHO ARE THE REPLACEMENT CANDIDATES?

There are 46 names on the ballot, but former Congressman Doug Ose withdrew because of health reasons after it had been printed. The 24 Republican candidates include Elder; former San Diego Mayor Kevin Faulconer; businessman John Cox, who was defeated by Newsom in 2018; reality TV personality and former Olympian Caitlyn Jenner; and Assemblyman Kevin Kiley.

There are nine Democrats, 10 independents, two Green Party members and one Libertarian. No Democrat with political stature ran — the best-known is real estate agent and YouTube personality Kevin Paffrath. Most of the candidates are largely unknown and have not mounted credible campaigns.

WHAT ARE THE CANDIDATES PROMISING?

Elder, whom polls have leading the field, has promised to bring a fresh eye and common sense to the Democratic-dominated state and has said he would swiftly lift state mask and vaccine mandates.

Kiley has said he would immediately end the pandemic state of emergency, which would automatically wipe out all state and local orders issued under it.

Faulconer has proposed ending the state income tax for individuals making up to $50,000 and households up to $100,000 as part of a plan to make the state more affordable for the middle class.

Cox sought attention by campaigning with a 1,000-pound (450-kilogram) Kodiak bear, which he said represented the need for “beastly” changes in the state, and is calling for a historic tax cut.

Jenner received significant attention when she entered the race but has run a very low-key campaign and is barely registering in polls.

How much will California spend on the recall election?

WHEN WILL WE KNOW THE RESULTS OF THE RECALL VOTE?

California’s recalls are different than elections in other states, and so is the way California counts ballots. The state allows any ballot to count as long as it’s postmarked by Election Day and received within seven days. So new votes are tallied late into the week and sometimes into the following week. The count itself is notoriously slow and can take more than a month before it’s finalized.

Most California Democrats vote by mail, and Republicans tend to vote in-person and have their ballots tallied faster. So whatever the results Tuesday night, they’ll likely become more and more Democratic as the counting continues.

Note: For Governor Gavin Newsom to be removed, a majority “yes” vote is needed. If that happens, the candidate with the most votes will succeed him.
Source: California Secretary of State

WHAT IS NEWSOM SAYING ABOUT THE RECALL?

He steered around questions of a possible recall for months, saying he wanted to focus on the coronavirus, vaccinations and reopening schools. In March, he launched an aggressive campaign and began running ads attacking the recall and doing national TV and cable interviews.

The main committee opposing the recall had raised nearly $70 million through the end of August.

Newsom, who was elected in a 2018 landslide, has acknowledged that people were anxious and weary after a difficult year of restrictions. Recently, he has defended his record during the pandemic — arguing his decisions saved thousands of lives — while warning that a Republican victory would undermine the state's progressive values and possibly have a ripple effect nationwide.

Democrats say the effort to remove him is being driven by far-right extremists and supporters of former President Donald Trump. The recall is backed by state and national Republicans, but organizers argue they have a broad-based coalition, including many independents and Democrats.

Lately, Newsom has focused his attacks on Elder, calling him more extreme in many ways than Trump. Elder dismisses such criticism as a political ploy to divert attention from Newsom’s record on crime, homelessness and the pandemic.

The governor spent much of 2020 on the defensive. But he has benefitted from a record budget surplus that allowed him to tour the state to announce vast new spending programs, including $12 billion to fight homelessness; checks of up to $1,100 each for millions of low and middle-income earners who struggled during lockdowns; and $2.7 billion for free kindergarten for all of the state’s 4-year-olds.

CAN NEWSOM SURVIVE THE RECALL VOTE?

In the depths of the pandemic, Newsom’s popularity was tumbling and he appeared imperiled, with widespread unrest over long-running school and business closures. Many business owners were infuriated by what they saw as Newsom’s heavy-handed restrictions that had some open and close several times. Others rebelled against mandatory mask-wearing rules.

Earlier this year, a reopened economy and the astounding windfall of tax dollars helped Newsom recover his standing. However, when Newsom fully reopened the state on June 15 virus cases were near record lows. Since then cases have been climbing, particularly among the unvaccinated.

Los Angeles County, which accounts for a quarter of the state's population, re-imposed a mandatory mask order on people who are indoors at public places, even if they’re vaccinated. California also is requiring K-12 students to wear masks when they go back to classrooms. Such an order could hurt Newsom, especially among those who felt he didn’t do enough to reopen schools last year.

However, recent polling indicates Newsom is in a strong position to hold his job. He has advantages over his GOP rivals: Democratic voters outnumber Republicans nearly 2-to-1, and the party controls every statewide office and dominates the Legislature and congressional delegation. President Joe Biden, Vice President Kamala Harris and former President Barack Obama have called on voters to reject the recall.

Republicans last won a statewide election in 2006, when Schwarzenegger was reelected.

Voting in the California gubernatorial recall election closes Tuesday night, and mail-in ballot turnout is high in areas likely to be in favor of Gov. Gavin Newsom. Whoever becomes (or stays) governor of the Golden State will have some big decisions to make, including appointing a replacement if aging Sen. Dianne Feinstein were to leave office (Feinstein, 87, has publicly stated she plans to serve out her full six-year term.) NBCLX Political Editor Noah Pransky breaks it down.
The Associated Press/NBC