Trump spoke in Tulsa, Oklahoma, in an arena with thousands of empty seats, a striking disconnect from the million people he had said wanted to come

President Donald Trump falsely said at his rally Saturday night that Democratic rival Joe Biden apologized for opposing his restrictions on travel from China early in the coronavirus pandemic. Scrambling to explain an unusually thin rally crowd, his campaign wrongly pinned blame on blockades by protesters for driving the masses away.

Trump spoke in Tulsa, Oklahoma, in an arena with thousands of empty seats, a striking disconnect from the million people he had said wanted to come. It was his first rally in months and played out as coronavirus infections have been rising in Tulsa and the state.

Trump's remarks followed days of self-congratulation as well as trashing of the Obama administration in which Biden served as vice president. Many of the president’s statements — on the pandemic, public unrest over police brutality, his record on veterans and more — were inaccurate.

A sampling from his statements Saturday night:

The 19,000-seat venue is expected to be full of supporters as Oklahoma sees a surge in coronavirus cases.

BRAD PARSCALE, Trump campaign manager: "Radical protestors, fueled by a week of apocalyptic media coverage, interfered with @realDonaldTrump supporters at the rally. They even blocked access to the metal detectors, preventing people from entering." — on Twitter.

THE FACTS: Protesters' blockades weren’t to blame for the turnout. There was no sizable effort by protesters to keep attendees from getting in.

Three Associated Press journalists reporting in Tulsa for several hours leading up to the president’s speech did not see anti-Trump demonstrators blocking entry points at the highly secured arena grounds. Police said they made a handful of arrests Saturday, including a woman in the secure zone who was sitting cross-legged in peaceful protest when officers pulled her away and handcuffed her.

Asked about the Trump campaign's claim, the mayor's office referred inquiries to Tulsa police. Capt. Richard Meulenberg on Sunday said that for a few minutes two entrances were blocked as both sides briefly “intermingled,” but that there was no organized blockade and attendees were always able to enter through one of three gates.

The crowd coming for the rally was modest to begin with, not a huge mass bottle-necked at the last minute by protesters.

The city fire marshal’s office reported a rally crowd of just less than 6,200 in the 19,000 seat BOK Center, according to Tulsa Fire Department spokesperson Andy Little. 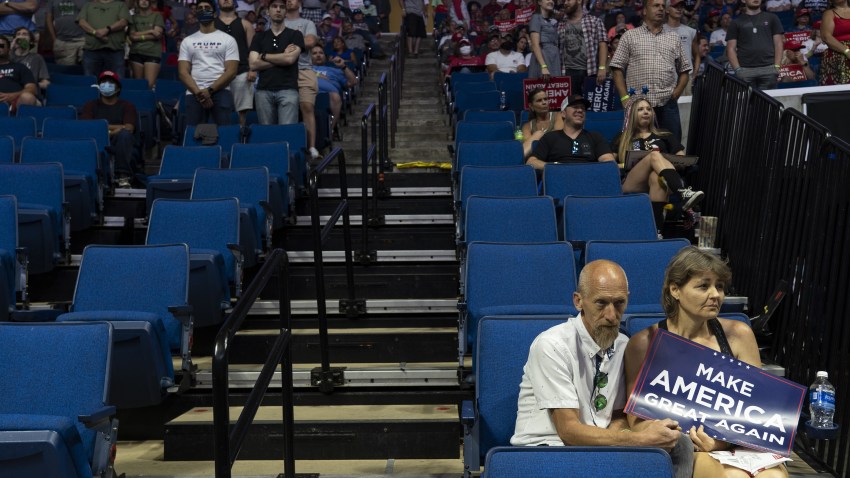 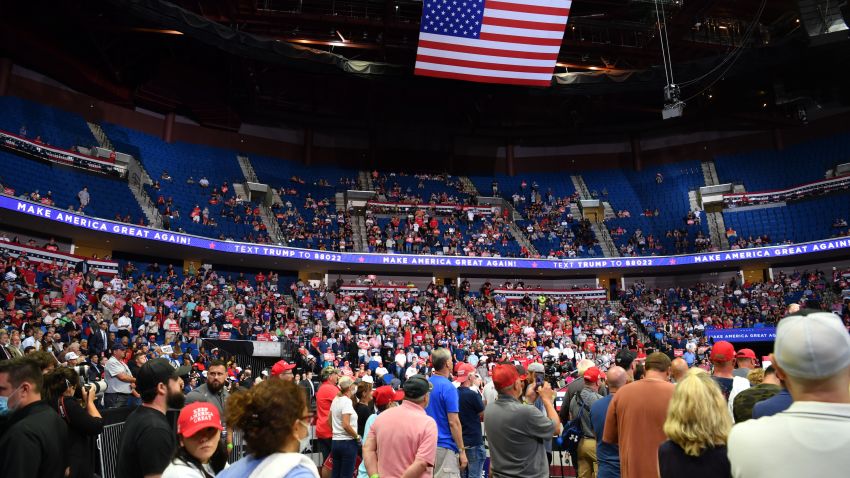 TRUMP, on tariffs: “China’s not exactly happy with me. Billions, they pay us billions and billions of dollars ... I took that money and I gave it to the farmers."

THE FACTS: That's a familiar assertion, false to the core.

It's wrong to suggest that tariffs on Chinese goods are being paid by China. Tariff money coming into the treasury is mainly from U.S. businesses and consumers, not from China. Tariffs are primarily, if not entirely, a tax paid domestically.

TRUMP, saying Biden accused him of being xenophobic for limiting travel from China, where the pandemic began: "He apologized a month later.”

THE FACTS: This didn't happen. Biden did not apologize. He actually supported Trump's travel restrictions.

The Democrat has indeed accused Trump of having a record of xenophobia, and hasn't apologized for doing so. Trump began calling the virus the “China virus” at one point, prompting Biden to urge the country not to take a turn toward xenophobia or racism in the pandemic.

Trump set that description aside for a time, but he went back to stereotyping at the rally, referring to the “kung flu” as well as the “Chinese virus.”

President Donald Trump on Monday dismissed criticism that his upcoming campaign rally in Tulsa, Oklahoma, could contribute to the spread of the coronavirus, saying, "I can tell you on COVID or coronavirus or whatever you want to call it—plenty of names— tremendous progress is being made."

TRUMP: "We passed VA Choice. ... It's never happened before.”