‘It's On!' Pence Campaigns in Maine With 15 Days Until Election Day

"It's on, Maine," he said at a "Make America Great Again" rally in Hermon. "It's time. We've got 15 days to go, and northern Maine looms large. You were there for this president and our team in 2016, and we know northern Maine's going to be there again."

"Men and women across Maine, look, we have a choice to make when it comes to this economy in the days ahead," the vice president said. "As our nation is recovering from the worst pandemic in years, who do you think is going to bring this economy back: a career politician who spent 47 years in Washington, D.C., or do you trust a proven job creator who will keep cutting taxes, rolling back regulations and fighting for American jobs every single day?"

Vice President Mike Pence speaks at a campaign rally in Maine on Monday before heading to New Hampshire Wednesday for the final stretch of the 2020 presidential campaign.

Pence also urged the Senate to confirm Amy Coney Barrett to the Supreme Court and railed against the possibility of Biden "packing the court" if he is elected.

Hermon, where the vice president’s rally was held, is in Maine’s second congressional district and could play a key role in the presidential election if the race is close.

“I think it’s going to be real tight up there,” said Daniel Shea, chair of the government department at Colby College, who said recent polling data from the school showed Biden and Trump very close in the second district.

CNN's John Berman says he was "blown away" by how little he knew about the voting process before doing a deep-dive into the Electoral College.

In 2016, then-candidate Trump became the first person to split Maine’s electoral votes, getting the sole vote from Maine’s second district, something he has tweeted about.

“A lot of early indicators suggest the left is mobilizing,” said Shea, adding that, “for the president, it’s critical that his base gets out as well.”

The turnout and voter energy was on the minds of the hundreds of people who lined up to see Pence on Monday.

“If we don’t show anything, how can other people be alive to vote for him,” said Aristina Noble, of Sidney.

Noble was also among a few people there concerned about Maine’s ranked-choice voting system possibly making it more difficult for Trump to win the district.

There's an effort to take ranked-choice voting before federal courts ahead of its use in the November elections in Maine.

Maine is the first state in the United States to use ranked-choice voting in a presidential election.

Between that and a significant number of Mainers voting absentee or in-person absentee before Election Day, some in line said they were concerned Trump might have a tougher fight than he did in 2016.

“I hope and pray,” said Mary Drew of Glenburn, expressing her hope that Trump will carry the second district again.

“I feel very concerned about all these mail-in ballots,” she said.

From Maine, Pence flew to a rally in central Pennsylvania on Monday afternoon.

He is scheduled to return to New England on Wednesday, when he will hold a 1:30 p.m. rally at Port City Air in Portsmouth, New Hampshire, before heading to Ohio later that evening.

Both Maine and New Hampshire are considered swing states, and the Trump-Pence campaign is working to swing as many of those in their favor as possible as Nov. 3 rapidly approaches.

Pence’s visit to Maine followed stops in the district by Donald Trump Jr. and Dr. Jill Biden, as well as an earlier summer visit to the area by Trump. 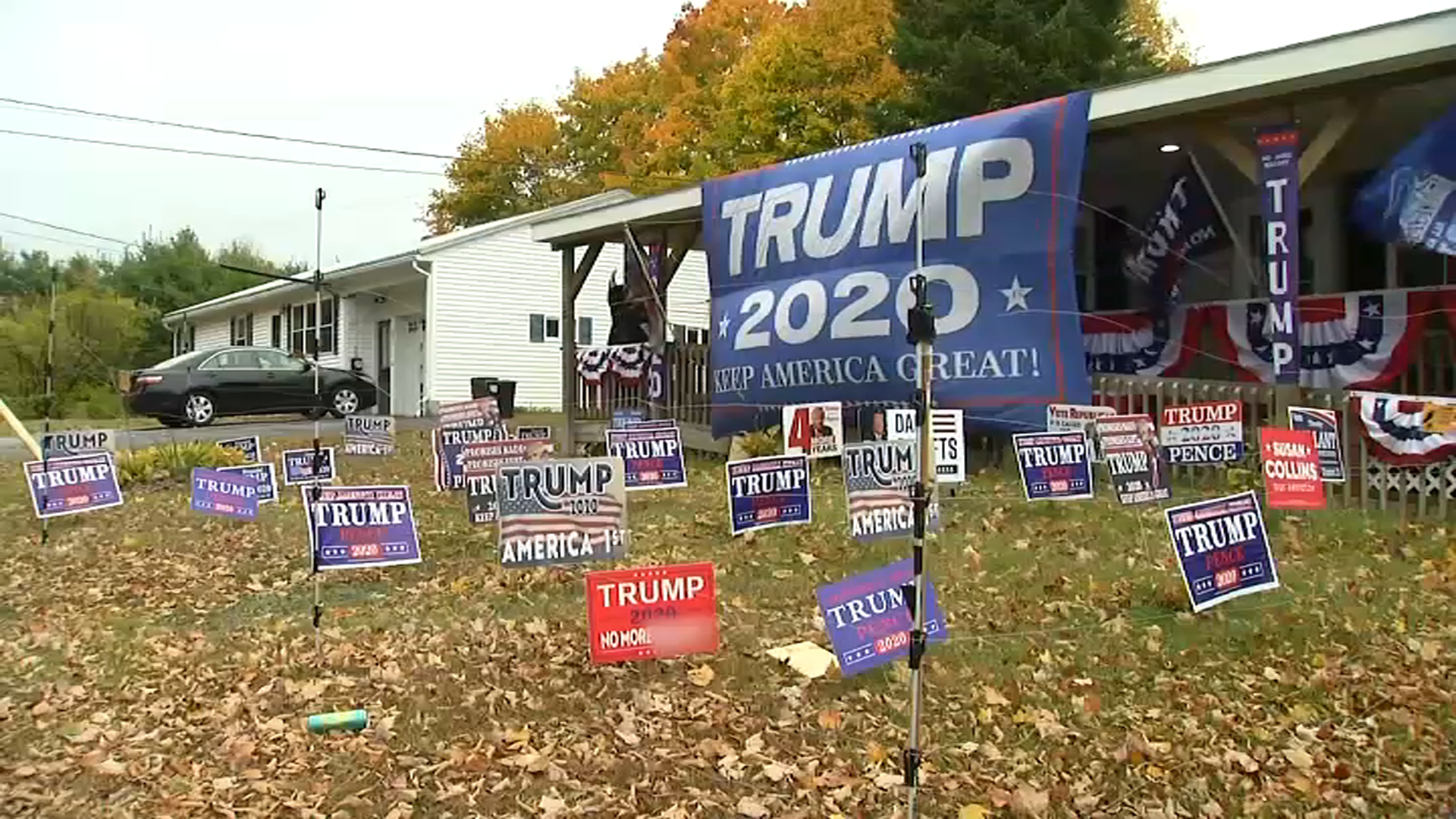 When His Trump 2020 Yard Sign Was Stolen, a Maine Man Built a Political Tour de Porch