Whoever wins will mark a major milestone in the city’s political culture, becoming the first woman and first person of color elected mayor of Boston

Whoever wins will mark a major milestone in the city’s political culture, becoming the first woman and first person of color elected mayor of Boston. In the city’s long history, voters have only elected white men to the top political post.

Wu will vote at the Phineas Bates Elementary School in Roslindale while Essaibi George will cast her ballot at the Bellflower Apartment complex in Dorchester. After that, each candidate has a packed scheduled of meeting and greeting voters.

Both candidates spoke to NBC10 Boston before hitting the polls Tuesday.

"Look, this election is about the future of the city and the big solutions that we need to be fighting for," Wu said via Zoom. "We are fighting for a city that includes every single one of us."

Wu has maintained a substantial lead over Essaibi George in the polls. In a poll conducted by Suffolk University for NBC10 Boston and the Boston Globe, Wu was at 62%, more than double the 30% support for Essaibi George, and with 7% of respondents undecided. A MassINC/WBUR poll had Wu leading by 32%.

But Essaibi George cast doubt on those numbers Tuesday morning at a polling location.

"The polls are certainly wrong," Essaibi George said. "And I'm excited to prove those polls wrong today. I felt a tremendous amount of momentum and energy and excitement from the people of Boston, especially in this get-out-the-vote weekend that we just wrapped up in here."

The pair spent the final hours of the campaign racing from neighborhood to neighborhood urging their voters to turn up at the polls Tuesday.

While the candidates largely agree on which are the biggest issues facing the city — from soaring housing costs, to public education, public transportation, policing and climate change — they have offered very different solutions.

Essaibi George has portrayed herself as a political pragmatist, criticizing Wu for proposing policies that she as mayor couldn’t make happen alone. Wu has said those bigger picture policies reflect the needs of Boston residents and said she would work to make them a reality.

"Our city's residents are looking for someone who is going to prioritize the very important work that they need them focused on and I'm focused on those issues," Essaibi George said, "from housing, to improving every one of our schools, to making sure that we're responding to the opioid crisis and making sure that every single one of our neighborhoods is a safe neighborhood."

"These numbers actually are very reasonable when it comes to the day-to-day expenses that our residents are bearing on their shoulders today," Wu said. "We're in a moment where cities across the country are having to rethink public transportation in terms of getting our economies reopened, in terms of closing racial wealth gaps and meeting our climate goals."

Wu said the proposal would strengthen the city’s economy, address climate change and help those who take the bus or subway to school or work. Essaibi George said the cost is staggering and would fall on the backs of Boston residents. The decision to eliminate fares is also beyond the scope of the mayor alone.

The 36-year-old Wu, whose parents immigrated to the U.S. from Taiwan, grew up in Chicago and moved to Boston to attend Harvard University and Harvard Law School.

Essaibi George, 47, a lifelong Boston resident, describes herself as a first-generation Arab-Polish American. Her father was a Muslim immigrant from Tunisia. Her mother, a Catholic, immigrated from Poland. 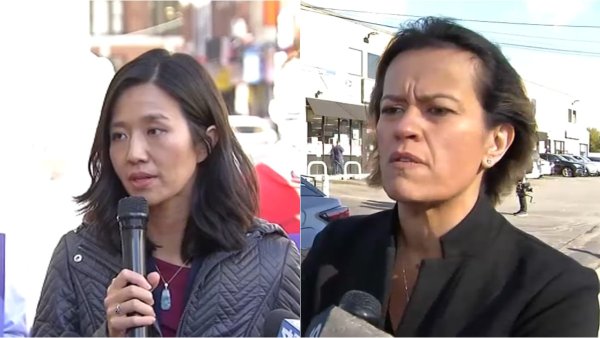