"It’s just unfortunate. I wish that it didn’t happen. It’s a bummer," Chestnut said of the incident

But he has one regret from his latest championship performance.

In an interview with USA TODAY Sports' Josh Peter, the world's top-ranked competitive eater said he "felt bad" about his viral takedown of a protester who rushed the stage during the contest at Nathan's Famous original restaurant in Brooklyn's Coney Island.

“As soon as I grabbed the guy, I realized he was a kid,’’ the 38-year-old Chestnut said. “I felt bad afterwards. I was just amped up, just focused on getting back to eating.

“It’s just unfortunate. I wish that it didn’t happen. It’s a bummer."

As Chestnut was downing his 18th hot dog, three protesters from the animal rights activist group Direct Action Everywhere ran onto the stage wearing "Star Wars" masks and holding up signs with the message "Expose Smithfield's Deathstar." The activists were protesting Smithfield Foods, which is Nathan's pork supplier.

One of the protesters, donning a Darth Vader mask, nudged Chestnut out of position and flashed the sign to the crowd. Chestnut, who arrived at the event on crutches due to a ruptured tendon in his leg, responded by putting that protester in a chokehold and taking him to the ground. Chestnut then immediately resumed eating as the protesters were removed by security. 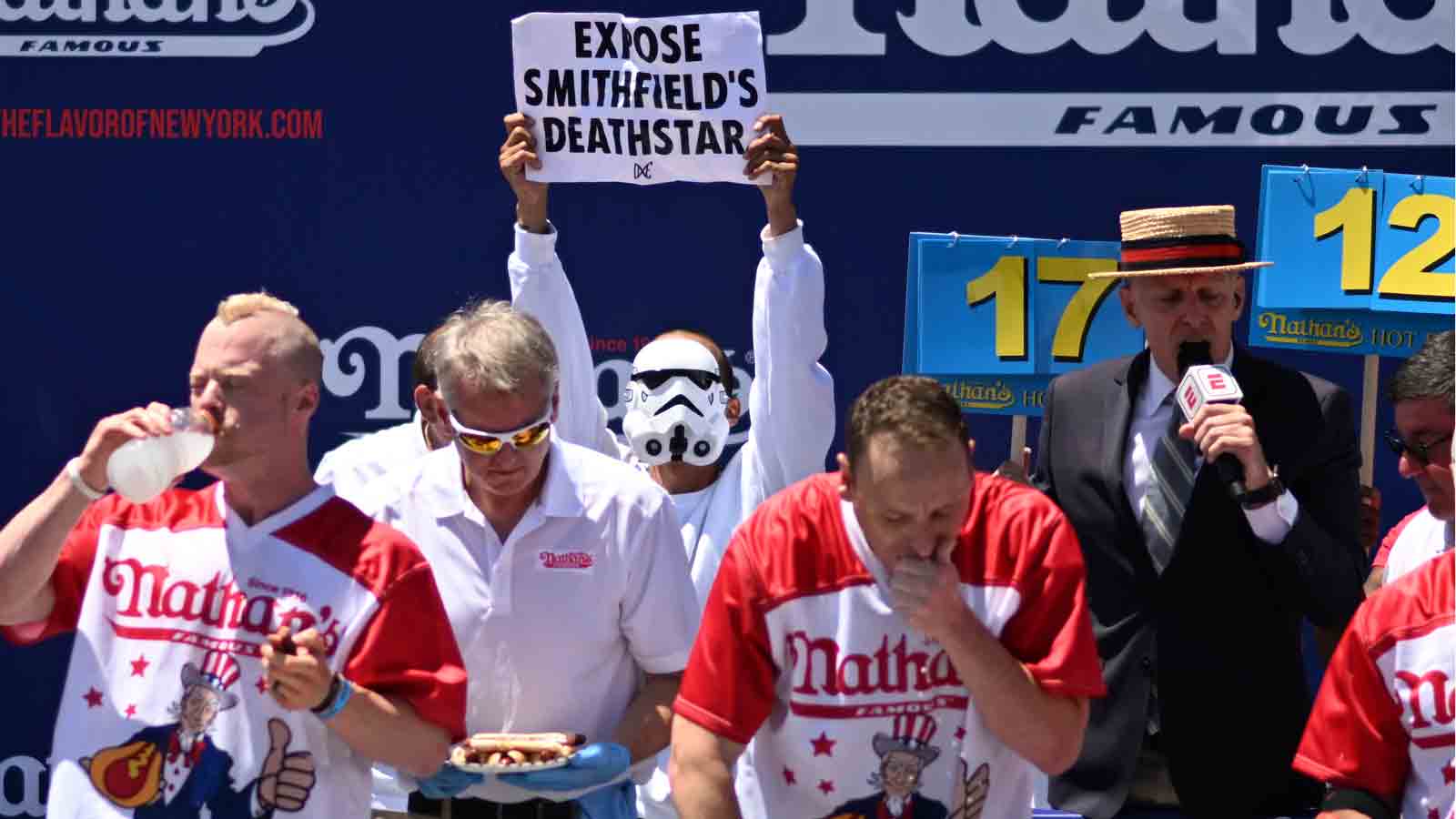 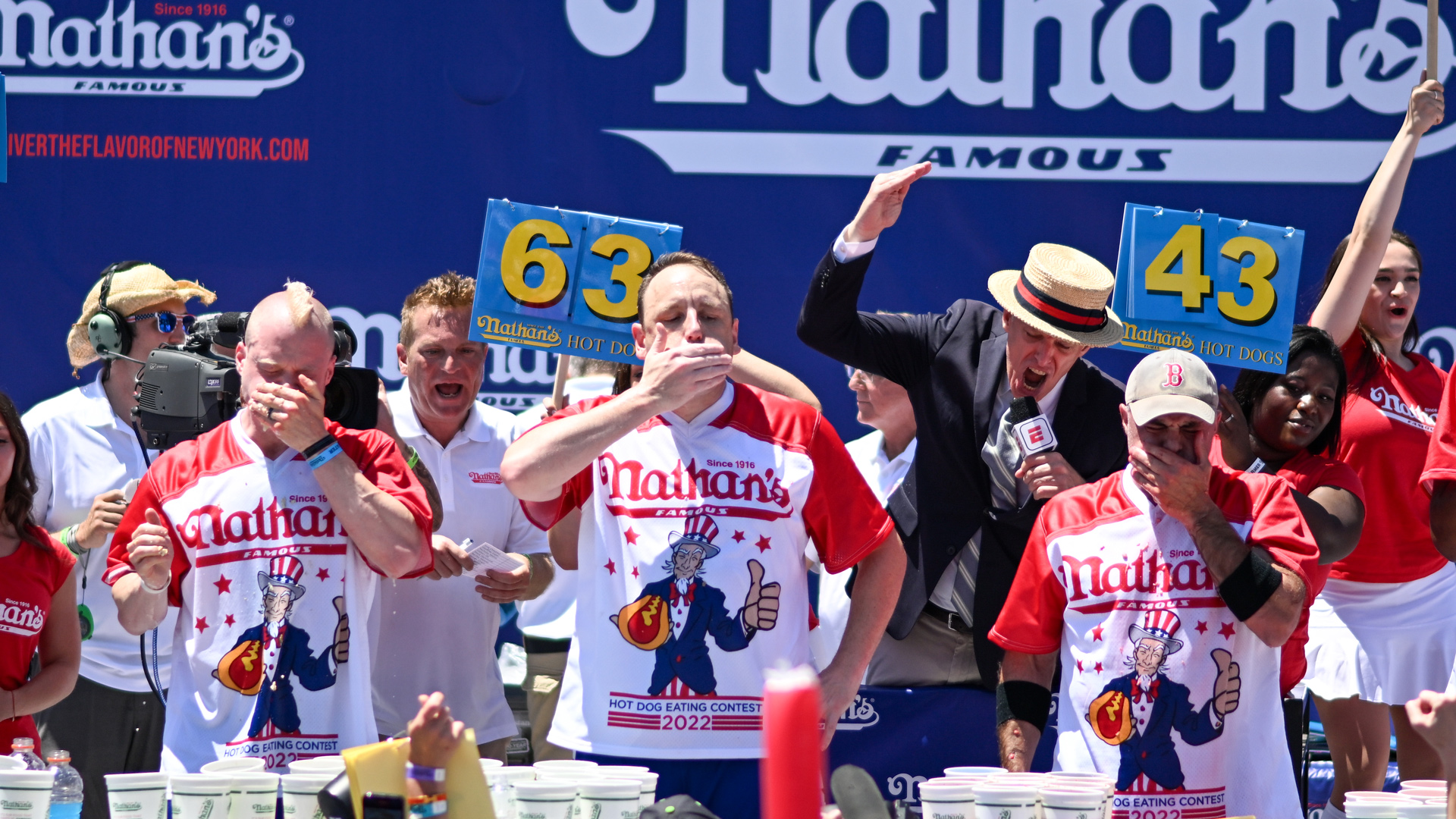 The Darth Vader-masked activist was Scott Gilbertson, a 21-year-old from Berkeley, California. USA TODAY Sports also spoke to Gilbertson, who felt the takedown was "unnecessary" and was surprised to find out Chestnut was the one who delivered it.

“I felt like it was unnecessary for sure,’’ Gilbertson said. “I had the mask on so I couldn’t see who it was. I assumed it was a security guard. And then when I saw the video, it was Joey. I was surprised.’’

Chestnut conceded that the altercation looked "excessive" but added that the mask Gilbertson was wearing played a role in his reaction.

“I was freaked out a little bit because he had the mask on,’’ Chestnut said. “I saw the mask and I think that’s when I realized he doesn’t belong here.’’

“It looks excessive,’’ he added. “But in my position, I don’t know, I had been waiting a long time for the contest and I wish [Gilbertson] had just stood by me and I never would have touched him. If he hadn’t elbowed me and got in front of me, it would have not been a problem. But I also wish they didn’t get on stage.’’

Gilbertson, who was charged with criminal trespass, disorderly conduct and harassment according to the New York Police Department, said he could understand why Chestnut would overreact in that situation, yet still thought it was excessive.

“I don’t really have anything against Joey as a person,’’ Gilbertson said. “I was just trying to get my message out there and my organization’s message out there. I wasn’t trying to nudge him. I had the mask on and my peripheral vision was hindered.

“I was trying to get in front of him. I couldn’t see how close I was to him and I kind of nudged him. So I can understand, I guess, why he may have overreacted. But I think the extent to which he reacted was unnecessary.’’

The two other protesters -- 42-year-old Robert Yamada of Phoenix and 31-year-old Joshua Marxen of Santa Clara, California -- were charged with criminal trespass and disorderly conduct, according to the NYPD.

Chestnut said he may have been able to eat three more hot dogs if it weren't for the incident. Regardless, he still won in comfortable fashion as he downed 63 hot dogs and buns, 15.5 more than second-place Geoffrey Esper.

The greatest hot dog eater of all time defends his title at the Nathan's Famous Hot Dog Eating Contest, winning his 15th championship.