NASCAR Crew Member, 30, and New Wife, 23, Die in Car Crash While on Honeymoon

The NASCAR community is mourning the loss of William “Rowdy” Harrell, a pit crew member for Hendrick Motorsports. Harrell, 30, and his wife Blakley Harrell, 23, were killed in a head-on car crash in the Florida Keys on Tuesday night while on their honeymoon.

Hendrick Motorsports released a statement on Wednesday to confirm the tragic news.

"Today, Hendrick Motorsports learned that team member William 'Rowdy' Harrell and his wife, Blakley, were tragically killed in an automobile accident in Florida last night," the statement said. "The newlyweds were traveling to celebrate their honeymoon after being married on Saturday."

"Harrell, 30, was a stand-out tire carrier for Hendrick Motorsports for the last eight seasons, most recently with the No. 88 NASCAR Cup Series team of driver Alex Bowman," the statement continued. "He was also a two-time NASCAR Xfinity Series champion pit crew member with JR Motorsports.”

Hendrick Motorsports shared the linked statement in a tweet, writing, “‘He was the heart and soul of our team.’” 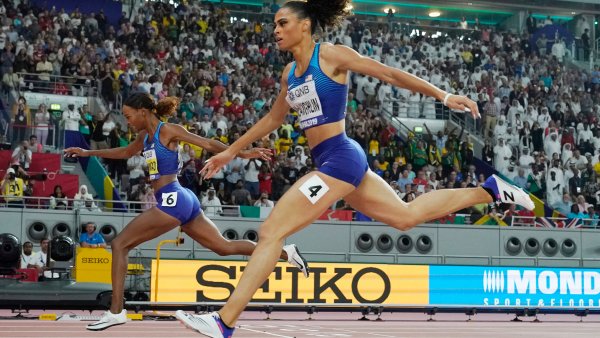 According to NBC Sports, a preliminary report from the Florida Highway Patrol stated that Harrell was driving north on a two-lane highway. Around 9:40 p.m. ET, his car went across the center line and into the southbound lane. A pickup truck tried to avoid Harrell’s car by driving onto the shoulder, but both vehicles collided.

All drivers and passengers were wearing their seatbelts.

“Our entire team is absolutely devastated at the loss of Rowdy and Blakley. They were such positive, giving and passionate people who could not have been a more perfect match,” Greg Ives, Harrell’s crew chief for the past six seasons, said. “Rowdy had an energetic and infectious personality. He was the heart and soul of our team and always kept us motivated, no matter the circumstance. Rowdy shared his love with the people around him and was loved in return.”

Ives continued his statement, adding, “Although he will be greatly missed, his memory will continue to inspire us always. Our prayers are with Rowdy, Blakley and their wonderful family.”

Harrell, a former middle linebacker for the University of Alabama football team, also received condolences from his alma mater. “Rowdy Harrell was a wonderful teammate and friend,” the Alabama football team tweeted. “Our thoughts and prayers go out to his family and friends during this devastating time. Roll Tide, Rowdy.”

NASCAR driver Alex Bowman tweeted a photo of himself alongside Harrell, writing, “Rowdy was everything that made the 88 team, the 88 team.”

“The biggest personality and the best person,” he continued. “He was the happiest person you’d ever meet, and that was only reenforced by his wife Blakley. Rip to an absolute legend. You’ll be missed every single day brother."

Tributes also poured in for his wife as well. Beau Reve, a hair salon in North Carolina where she worked, shared their condolences on Facebook.

"It is with great sadness that to inform you of the passing of our stylist Blakley Harrell," their statement said. "It has been devastating to the team here a Beau Reve Salon to lose such a beautiful soul too soon."

"Blakley will forever be missed. She was beautiful on the outside but even more so on the inside. She was talented, kind and so thoughtful. The salon will not be the same with her gone."

Harrell shared shots from the couple's wedding on Monday, Nov. 23, two days after the big day.

“On behalf of my new wife and myself.... I would like to thank every single person who had a hand in our special day, came to be there for it, or simply gave us well wishes," he wrote. "From the bottom of our hearts we love you all and feel how much you love us!! #whatablessing.”