After finishing fourth in the medal table at back-to-back Winter Olympics, the United States will look to improve its standing when the 2022 Games get underway from February 4-20.

In this two-part series, we'll give you a look at some of Team USA's top athletes to watch out for this winter. Part 1 covered the snow sports, and Part 2 here features the ice and sliding sports. Other articles will also cover the top international athletes to know and much more.

At PyeongChang 2018, gold medal wins by the men's curling and women's hockey teams provided two of the signature moments for the United States. Those teams will attempt to defend their titles this winter, while American figure skating star Nathan Chen and other athletes listed below will offer strong medal chances in their own events.

After missing out on a podium finish in men’s singles in PyeongChang, American star Nathan Chen bounced back – with a vengeance. The 22-year-old won the next 14 straight contests he entered, including three straight World Championships. The three-year winning streak came to an end at 2021 Skate America when he shockingly finished third. Still, his 2022 results have been solid: He broke a national short program record at the U.S. Figure Skating Championships on his way to clinching a sixth consecutive title. Chen is the first skater to have landed five types of quadruple jumps in competition and eight quadruple jumps across a single competition, which he did at 2018 Worlds. Since the 2018 Games, Chen has also started college at Yale University, but took a leave of absence to prepare for the 2022 Olympics. 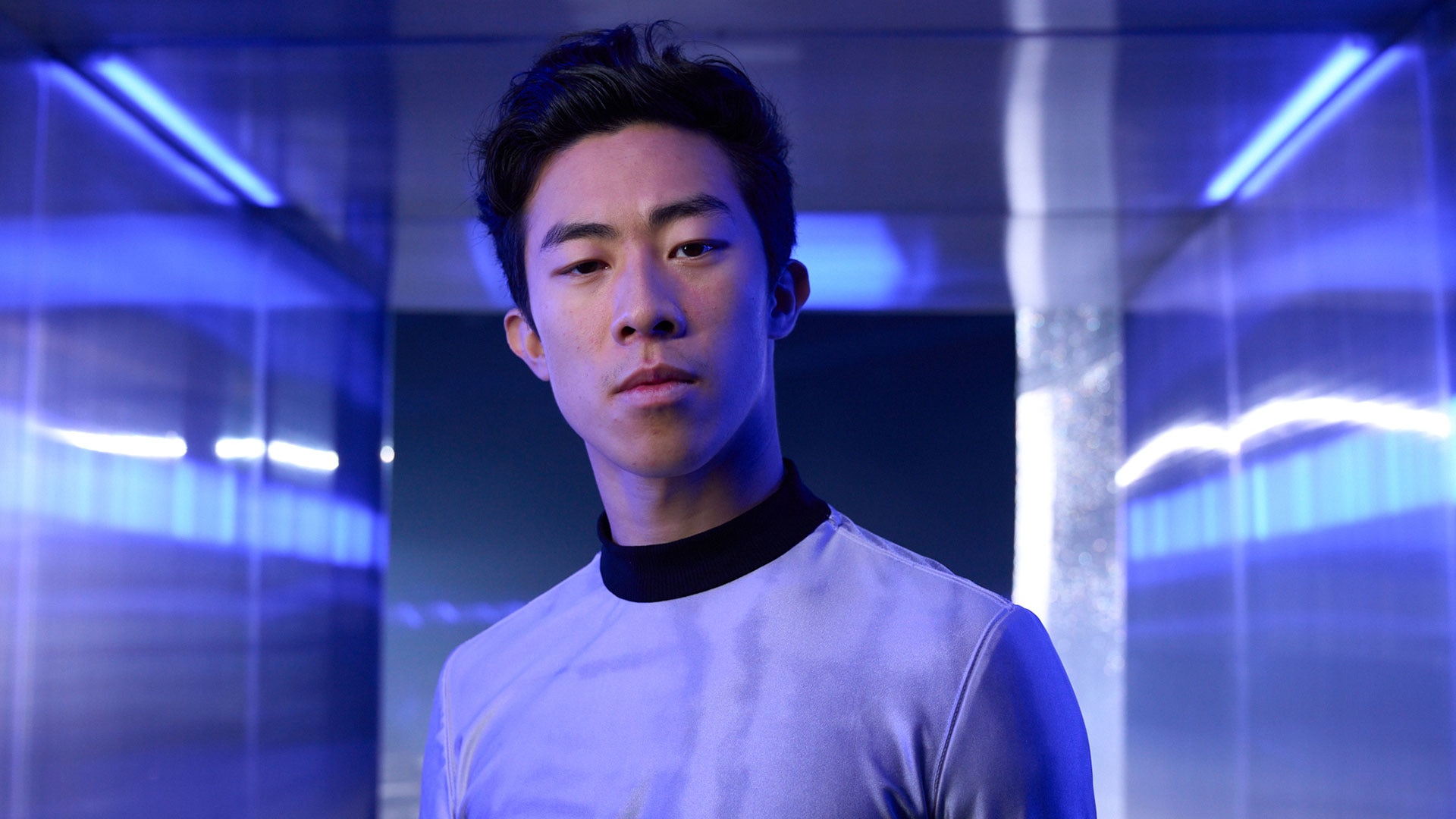 Nathan Chen has been nearly unbeatable since the last Winter Olympics.
NBC Olympics

Watch all the action from the Tokyo Olympics live on NBC

Paralympics Open in Tokyo's National Stadium With Acrobats, Fireworks and Parade of Athletes

Lakewood, California-based Mariah Bell has impressed on the figure skating circuit since 2012, when she finished fifth in the junior division at the U.S. Championships. She made her international debut in 2014, and appeared on the Grand Prix circuit the following year. Switching to current coach Rafael Arutyunyan in 2016 helped Bell step up, literally: She made the podium at Skate America that year, and earned bronze at the 2017 U.S. Nationals. After five years of consistent results (and medals), Bell hit a career high at the 2022 U.S. Championships when she claimed her first-ever national gold at age 25 – becoming the country’s oldest women’s figure skating champion since 1927.

Hilary Knight is pretty much a household name at this point. The 32-year-old Palo Alto native has won three Olympic medals, including a gold from PyeongChang 2018, and has been the backbone of the U.S. women's team for over a decade. And in February, she'll continue to serve as one of USA's key contributors as the women's team looks to defend its title. 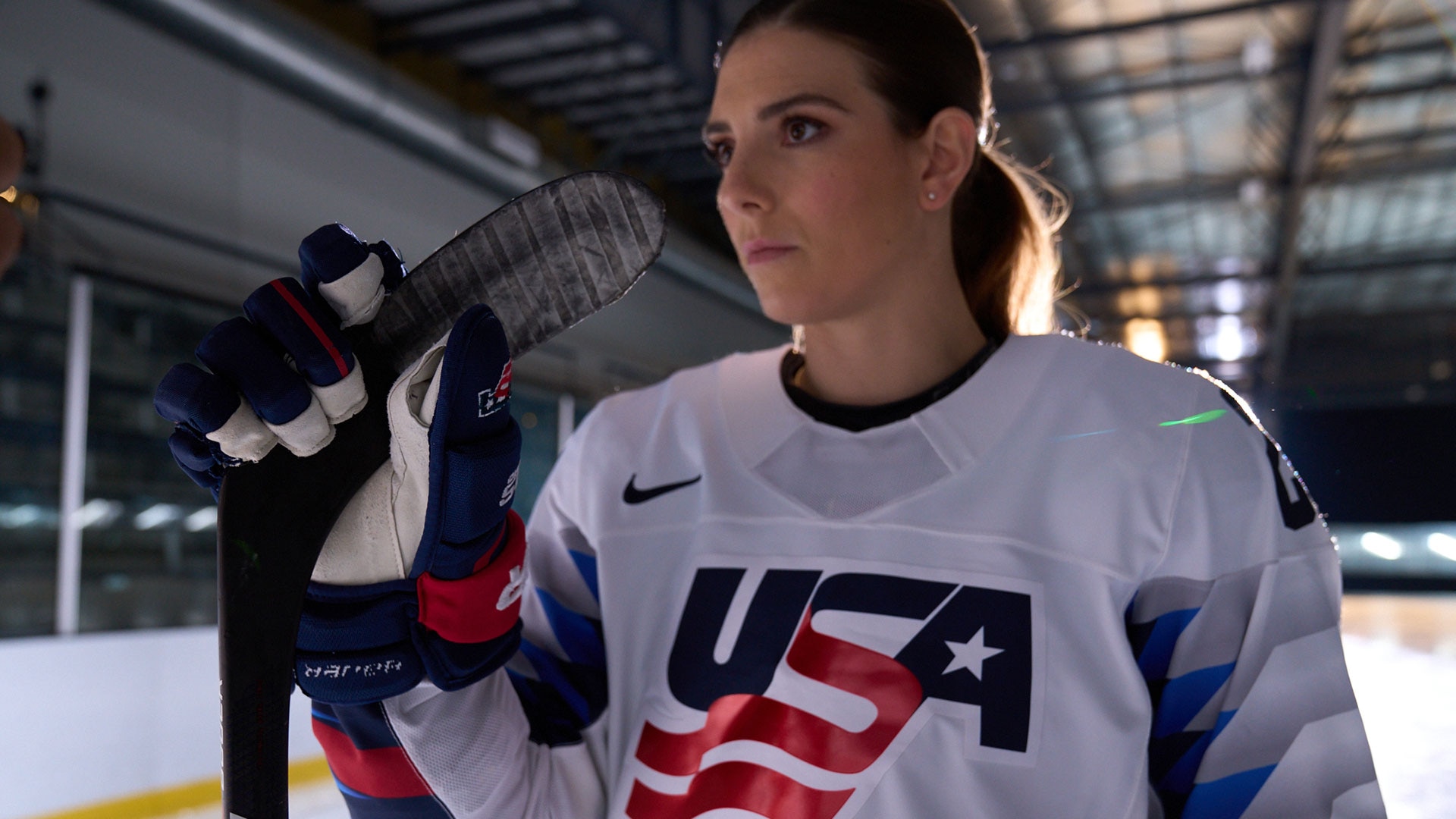 Hilary Knight has one gold and two silver medals in her collection so far.
NBC Olympics

Another key cog on Team USA's women's hockey team over the last decade, Brianna Decker is once again expected to make the trip overseas to shoot for a second consecutive Olympic gold medal. Decker tallied three assists in five games in PyeongChang, including an assist in Hilary Knight's opening goal of the gold medal game against Canada. After a mere four months of training on ice, Erin Jackson showed up to the 2018 U.S. Olympic Trials and became the first Black woman to qualify for the U.S. Olympic team in long track speed skating. Now with four more years of experience under her belt, the former inline skater is ready to take the next step. Jackson entered this season with a career-best World Cup finish of ninth, but the 29-year-old Florida native is now enjoying a breakout campaign after winning four of the first five 500m World Cup races this season. In the process, she also set a new American record (36.80 seconds) in the women's 500m. Jackson's sudden ascent has turned her into a gold medal favorite at the Winter Games, where a win would make her the first U.S. woman to earn gold in the 500m since Bonnie Blair in 1994. The last time a U.S. woman won an individual Olympic speed skating medal of any kind was in 2002. 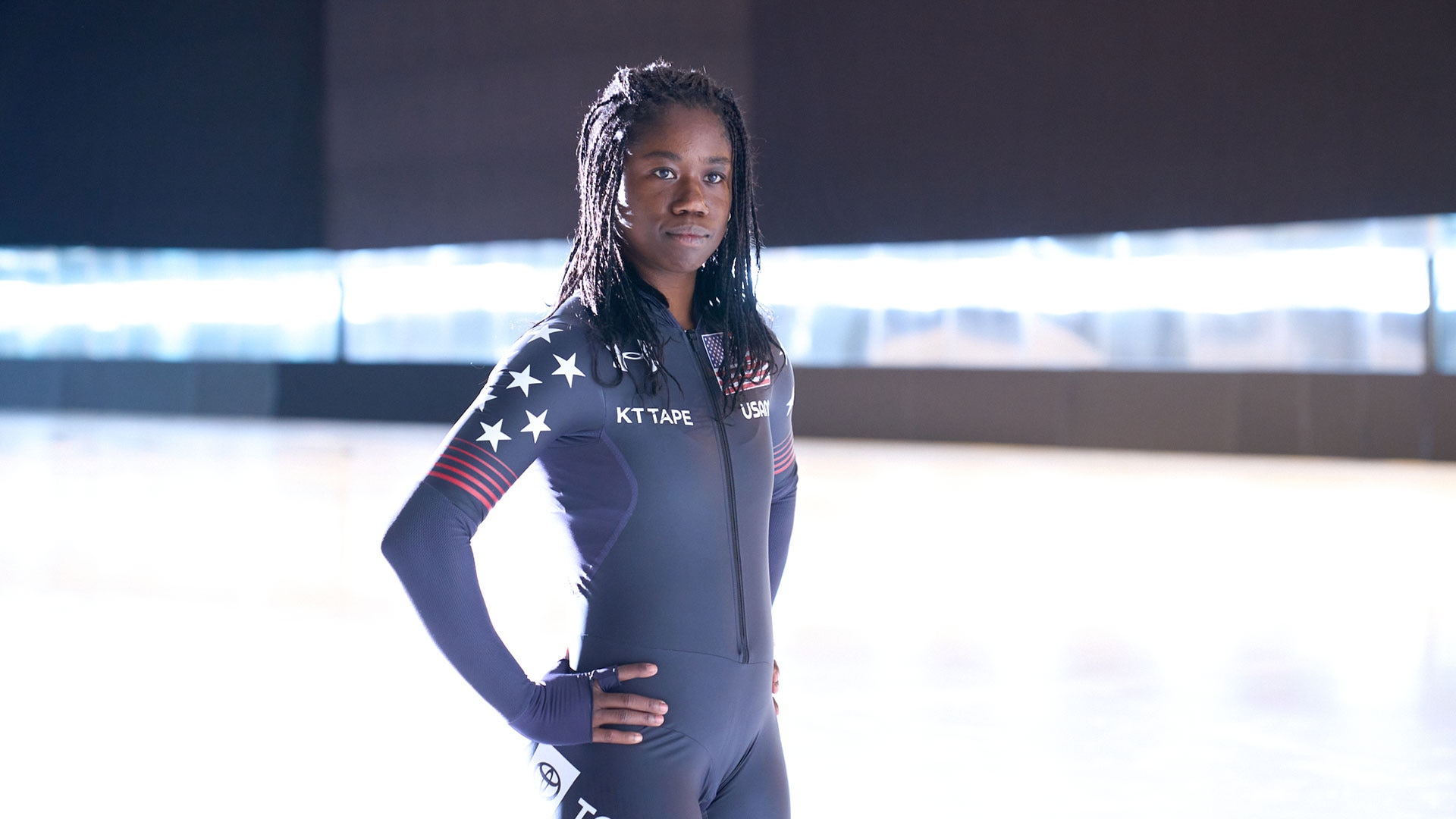 The United States has a rising short track star in 27-year-old Kristen Santos. The Fairfield, Connecticut, native has gotten the 2021-22 season off to a red-hot start with a trio of top-three finishes – including her first career win – in just the first two World Cup stops. Headed to her first Winter Olympics after an injury kept her from qualifying for PyeongChang in 2018, Santos will be a medal contender in both the 1000m and 1500m events. 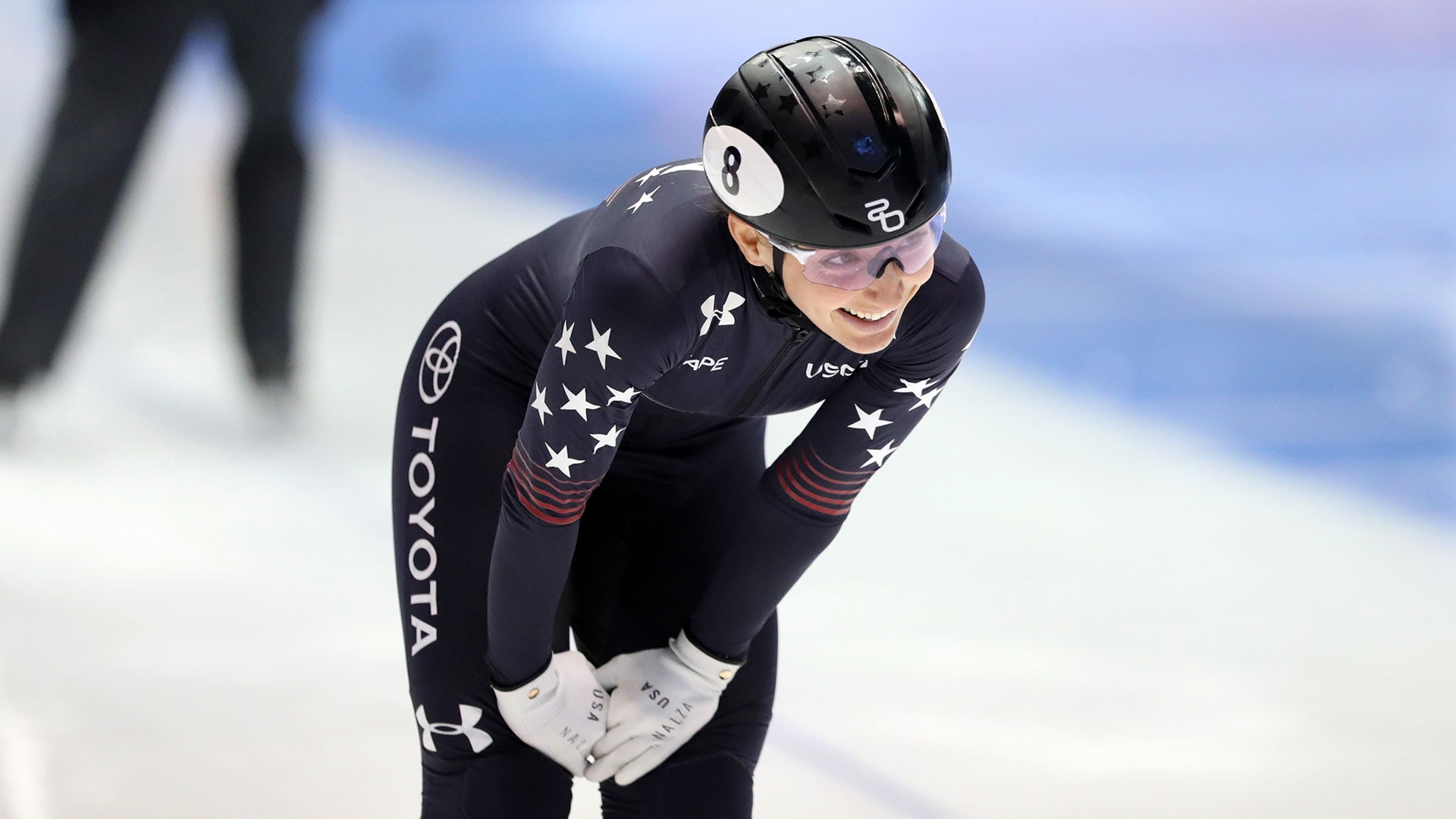 Kaillie Humphries, a multi-time medalist in the two-woman bobsled event for Canada, switched to representing the United States after the PyeongChang Games because of abuse and harassment she alleges she faced within the Canadian bobsledding team. Her status for the 2022 Winter Games was in limbo as she awaited U.S. citizenship, but she was finally sworn in as a citizen in December, officially clearing the way for her to compete in Beijing. Since joining Team USA, Humphries has won three world titles: the two-woman bobsled titles in 2020 and 2021, and the inaugural women's monobob title in 2021. She'll be a medal contender in both events at the Winter Olympics. Pilot Elana Meyers Taylor is a three-time Olympian who has won a medal at each Games, most recently taking silver at PyeongChang 2018 with pusher Lauren Gibbs. She married fellow elite bobsledder Nic Taylor in 2018, and the two welcomed their first child, Nico, just ahead of the COVID-19 pandemic. Becoming a mom hasn't slowed down Meyers Taylor: She ranked first in the monobob and two-woman standings at the 2021-22 Bobsled World Cup series, which wrapped up in January. Expect to see her compete in both disciplines at the Games. Four-time Olympian John Shuster is currently the unquestioned king of American curling. The 39-year-old skipped the men's team to its first-ever curling gold medal at PyeongChang 2018 and also earned bronze at Torino 2006. And if that isn't enough, Shuster has also competed in nine World Curling Championships. Most of Shuster's team remains intact from the last Olympics: Matt Hamilton and John Landsteiner are back for this cycle, while Christopher Plys is a new addition after Tyler George stepped away from competing. After winning U.S. Olympic Trials, Team Shuster will return to the Winter Games in hopes of defending its title. 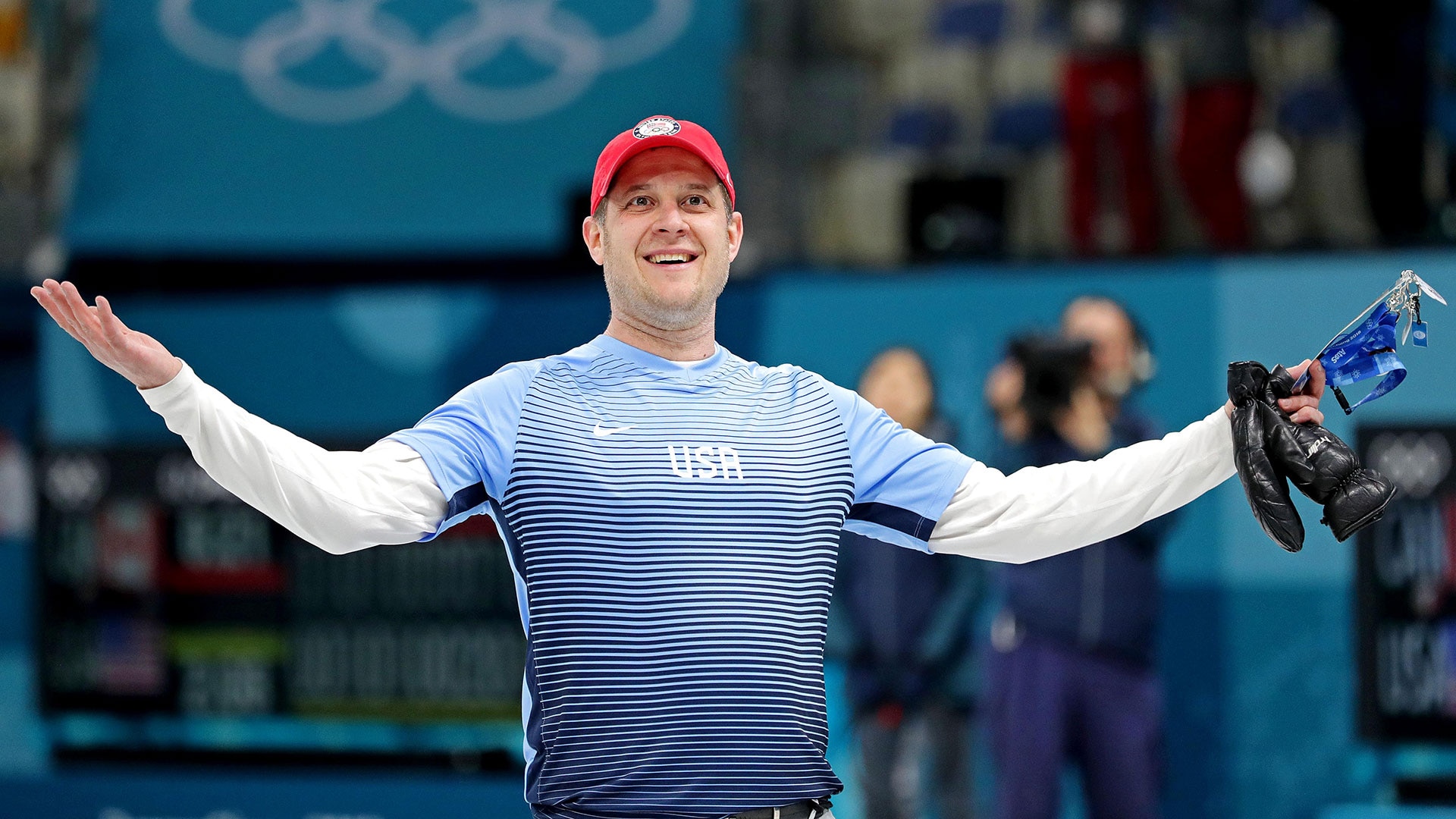 Ice dance duo Madison Hubbell and Zachary Donohue are laying it all on the line in the 2021-22 season, knowing it will be their last before retirement. The pair first teamed up in 2011; Hubbell previously competed alongside her brother, Kieffer. Hubbell and Donohue won the 2018 U.S. Championships by .19 points over the Shibutani Siblings, then went on to compete in the individual ice dance event at the 2018 Olympic Games, taking fourth by a narrow margin. They won 2019 Nationals and took silver to Madison Chock and Evan Bates in 2020. Heading into the 2020-21 season, Hubbell and Donohue brought on two-time Olympic champion Scott Moir as one of their choreographers, then won their third national title and took silver at the 2021 World Championships. They opened the 2021-22 Grand Prix series with a win at Skate America, their fourth straight at the event, edging Chock and Bates. Hubbell and Donohue kicked off the season with a victory at Skate America in October.
USA TODAY Sports

American pairs team Ashley Cain-Gribble and Timothy LeDuc are seeking their first Olympic berth. Cain-Gribble is the daughter of Peter Cain, an Australian Olympian in pairs skating, and Canadian Darlene Wendt, a former ice dancer. Cain coaches the duo, which won its first U.S. title in 2019 — making LeDuc the first openly queer skater to win a U.S. pairs title — and was the sole American pairs team at the 2019 World Championships. At 2020 and 2021 Nationals, they took fourth and third, respectively. Cain-Gribble and LeDuc were named alternates for the 2021 World Championships and ended up competing, finishing ninth. Cain-Gribble contracted COVID-19 in the summer of 2021, resulting in a delayed start to the pair’s season, but they opened their Grand Prix season with a third-place finish at Skate Canada. An electrifying skater with an infectious smile, Maame Biney is eyeing a breakout Winter Games after gaining fans as a charismatic 18-year-old in PyeongChang when she became the first Black woman to compete on a U.S. Olympic short track team. She’s become versatile over multiple distances in recent years, but remains strongest in the fastest short track event, the 500m. Biney, originally born in Ghana, will look to channel fearsome alter ego “Anna Digger” when she takes the ice in February.

At 33 years old, speed skater Brittany Bowe is facing her best chance to win individual hardware at the Winter Olympics. She already holds a bronze medal from the team pursuit in 2018, impressive considering she nearly missed PyeongChang altogether due to a severe concussion in the lead-up. The former Division I basketball player at Florida Atlantic University expects to contend for podium places in two individual events: the 1000m, for which she's the reigning world champion, and the 1500m. 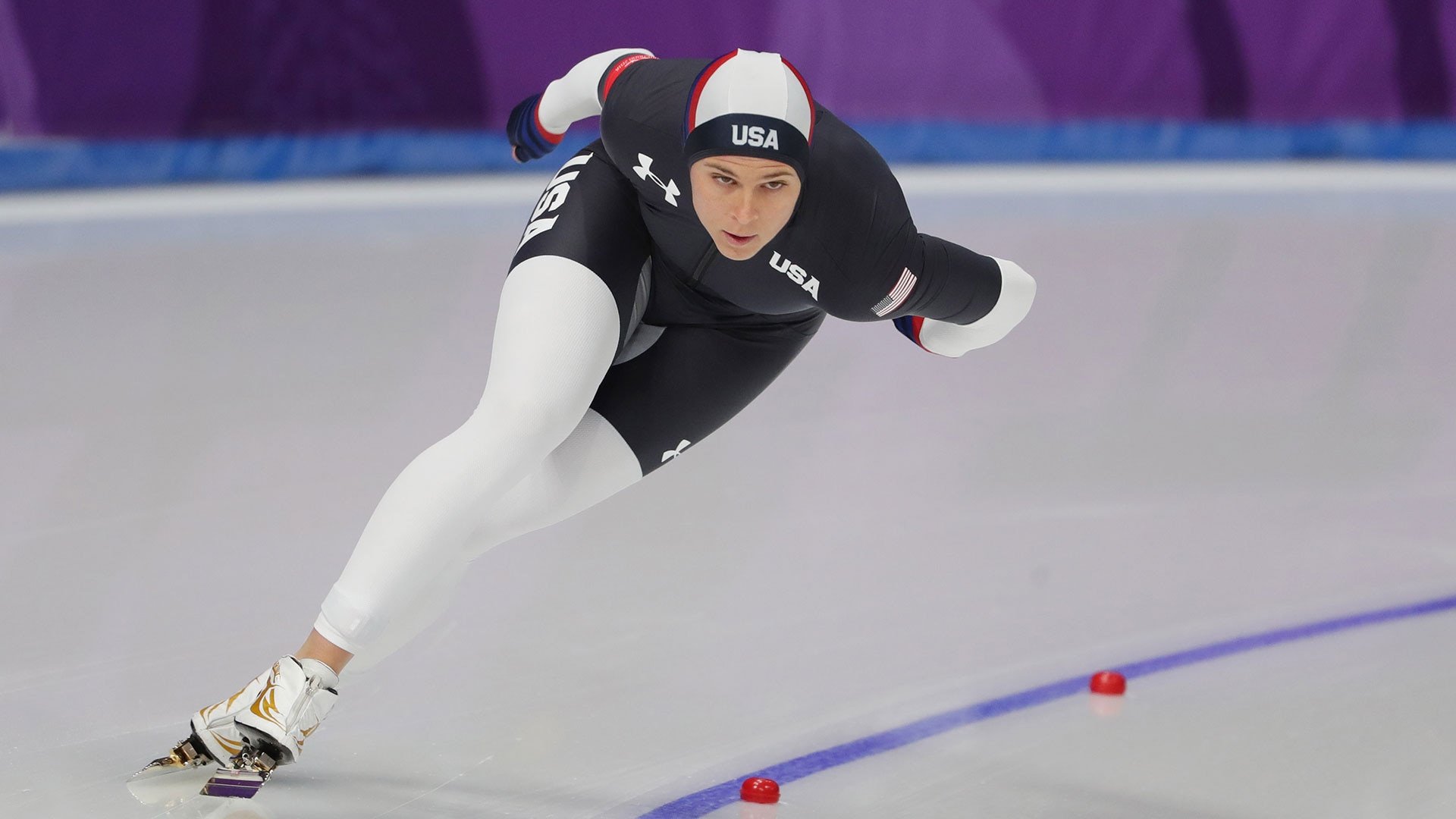 At the 2018 PyeongChang Games, Chris Mazdzer became the first American man ever to win a medal in men’s singles luge. He followed up those Games with a stint on “Dancing with the Stars,” in which he placed fourth. At the 2019 World Championships, Mazdzer dealt with a neck injury and only competed in doubles and the team relay; at 2020 Worlds, he took bronze in the mixed team event. The 2021 event saw him finish 10th in singles, his best finish in the discipline at Worlds since he placed fourth in 2016. Mazdzer broke his foot in September but returned to the World Cup circuit in hopes of competing at the 2022 Winter Olympics. Though he managed to secure a spot in singles, Mazdzer barely missed an opportunity to compete in doubles.