Deposition excerpts in the lawsuit by American women's soccer players against the U.S. Soccer Federation reveal lawyers for the governing body questioned the athletes about the distinction between their game and that of the men

Carli Lloyd was pushed over and over on differences between women and men.

"I'm not sure," the two-time FIFA Player of the Year replied.

Finkel inquired about a 2015 email interview Lloyd conducted through her agent's assistant with the website Sportskeeda.

"You wrote men are faster and stronger, right?" Finkel probed.

"Yeah, if you take those away, yeah, it would be a contest," Lloyd said.

Again and again, members of the champion U.S. women's team were pushed to detail distinctions between their sport, which they dominate, and the men's game, where the Americans struggle.

Lawyers for the USSF are trying to show it's OK to pay the women differently than the men because the competition is different. The sides made excerpts of depositions public in court filings Thursday night.

"The tone during depositions is reflective of the kind of condescension that many USSF officials employ when talking to the players about pay and workplace conditions," said Molly Levinson, spokeswoman for the players, "including the plainly disrespectful and sexist attitudes from USSF and their representatives during CBA negotiations when they refused to offer anything close to equal pay." 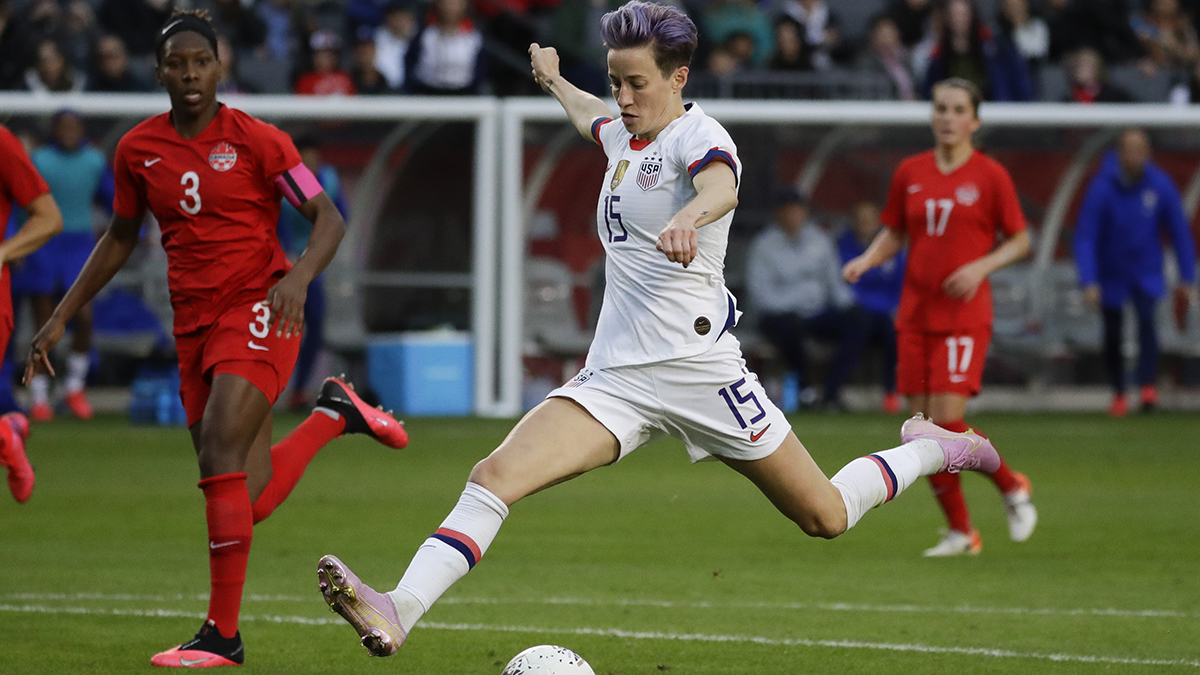 US Soccer Men's Union Says Women's Pay Should Be Tripled

The women sued last year, alleging the USSF violated Title VII of the Civil Rights Act of 1964 and the Equal Pay Act of 1963 in reaching what they say is an inferior collective bargaining agreement with the women than the deal struck with the American men. They are seeking more than $66 million in damages.

The federation maintains the women have many benefits the men lack, including guaranteed salaries, health insurance, paid child-care assistance, pregnancy and parental leave, severance pay and access to a 401(k) retirement plan. Men get paid by the game and tournament, most earning the majority of their income from their club.

Reigning FIFA Player of the Year Megan Rapinoe was questioned about her response in an interview she gave to Pod Save America in which she said: "Our pay structure is different. We play different games. We're different rankings in the world. Like, it's just apples to oranges."

"The international soccer environment in which the MNT players compete is far more competitive by many measures than that in which plaintiffs compete," the USSF said in one of its papers filed with the court. "The MNT players have lower odds of succeeding in the face of such greater competition. In short, MNT players must achieve more and/or better results against tougher competition in order to qualify for, and succeed in, tournament competition."

The 2019 World Cup champions returned to the U.S. on Monday after beating the Netherlands 2-0 in the World Cup Final Sunday.

Barring a settlement, the trial is scheduled to start May 5 in U.S. District Court in Los Angeles. The women's five-year labor deal runs through 2021 while the men play under the terms of a contract that expired Dec. 31.

During her deposition on Jan. 15, former U.S. coach Jill Ellis testified she was told the men got chartered flights at times and the women didn't. The USSF spent about $10.7 million on hotels for the men and approximately $7.3 milllion on the women during the fiscal years 2012-20. Air travel was about $6.3 million for the women during that period and $14.3 million for the men, many of whom play in Europe. The USSF increased first- and business-class travel for the women in 2017.

Speaking during her Dec. 20 deposition, Lloyd talked about personally training with the Medford Strikers' under-18 boys team in New Jersey.

"It's different in the sense that men are bigger, stronger, faster. That's their makeup. There's no -- there's no denying science in that regard," she said. "But I am the most skillful player there. So if you take their speed and athleticism and their strength away, it's the same game."

Former USSF President Sunil Gulati during a Dec. 17 deposition used a comparison with an NBA star to point out differences.

"LeBron James doesn't get a bonus for getting 15 points and for the Lakers finishing out of the playoffs," he said. “The expectations for him are different based on who they're playing against, what — who he is, what the level is.”